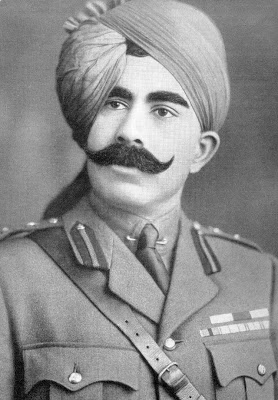 Maharaja Ganga Singh (1880-1943) ruled Bikaner princely state for 56 years, improving its amenities of education and medicine, modernizing its transport and communications network, and cutting the famous Gang Canal through the barren wastes (Jangaldesh) in the north. Pictured above in military uniform, the Maharaja was trained in traditional Rajput military skills like riding and shooting, but also received modern military education with an Indian Army regiment at Deoli. The old military forces of Bikaner state were modernized by Ganga Singh, serving with distinction in several overseas military campaigns, and were the Bikaner princely state’s contribution to the Indian Army after the merger with India.

The order and training of the Bikaner army had not changed by much in 500 years of history; a centrally raised force of cavalry, artillery, infantry, camel cavalry and camel artillery, which was augmented from the quotas contributed by the Rajput chieftains of Bikaner. Under Ganga Singh this force was standardized in rank and pay structure, it’s training and equipment was improved, the system of feudal quotas was ended, and each unit was given formal uniforms and designations. In 1933 the Bikaner army included: 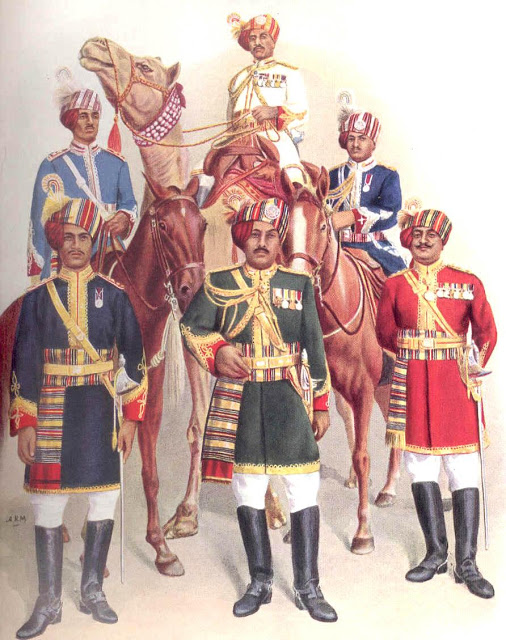 The men of this new army continued to be recruited from within Bikaner state. For the Ganga Risala, which was formally raised in 1889 as six companies of 500 men marked as Imperial Service Troops, the composition of soldiers was:
1)75% Rajputs of the ruling Rathod clan of Bikaner.
2)25% Rajputs of other clans, and a few Sikhs and Kaimkhani Muslims.

The first major use of this new army was in the Great Famine of 1899 which afflicted a large part of British and Princely India. Organizing famine relief is a measure of an efficient administration, and while using the army to transport grain to relief centers, Ganga Singh also launched public works to give employment and income to his people for the successful disbursement of relief material.

The 20-year old Maharaja led the Ganga Risala to China for service in the Boxer Rebellion from September 1900 to May 1901. The Camel Corps saw action as a dismounted unit in that theater. The most shining moment for the Ganga Risala came in the Somaliland expedition where it operated till 1904 and was deemed most useful in that waterless tract. According to Colonel Yeilding, “the Indian camel saved the situation.” While the local Somali camels could go longer without grain or water, they were found to be more timid and weaker than the Bikaner camels. The training of the Ganga Risala also helped in its utilization for action, while other camels were used primarily as transport.

Ganga Singh was not permitted to join the Somaliland campaign, but he led the camel corps to Egypt during World War I. It was the only camel corps available and was utilized for patrol and reconnaissance along the Suez Canal, which was under attack from the Turks. In one engagement the Maharaja himself fired many rounds at the enemy, and after their defeat led the Ganga Risala in pursuit. Ganga Singh also fought on the French front and represented India at the Paris Peace Conference after the war. When India’s membership in the proposed League of Nations was being denied, on the grounds that it was not a self-governing state, the Bikaner Maharaja successfully stated India’s case: “Where it is a question of securing the peace of the world, the important fact must be borne in mind that India represents one fifth of the entire human race.”

The Bikaner Camel Corps, along with the Bijay Battery, was again deployed in the Middle East during the Second World War. Other units like the Dungar Lancers, the machine gun section, and the Sadul Light Infantry were also utilized in different theaters of that global conflict.

Camel Corps of other Indian Kingdoms

The improved administration had increased the revenue of the Bikaner state from 4 lakh to 17 lakh, which kept rising after the construction of the Gang canal, enabling the state to train, equip, and maintain it’s 2000 man army till the merger of the state in India. The other desert states like Jaisalmer and Kutch also had traditional camel cavalry. Colonel James Tod, the author of the Annals and Antiquities of Rajasthan, states that Jaisalmer state had a 200 strong camel cavalry, 80 of which belonged to the ruler, while the rest were contributions of the Rajput chieftains. Describing the Jaisalmer camel cavalry in action, Tod writes: “Two men are mounted on each camel, one facing the head, the other the rear, and they are famous in a retreating action; but when compelled to come to close quarters, they make the camel kneel known, tie his legs, and retiring behind, make a breastwork of his body, resting the matchlock over the pack-saddle.”

Previously a large state strong on the finances of the old land trade, Jaisalmer state was hit hard by the transformation in global trade by the European domination of the seas. It’s low revenues meant that till the end the state troops numbered just 220 of all arms: namely, 39 horse cavalry, 168 infantry, and 13 artillerymen. There was an irregular force of camels, which were also used by the police force (152 men, of whom 72 were mounted, chiefly on camels). During the Sindh war of 1838-39, Rawal Gaj Singh supplied camels to the British for transport and was rewarded by the restoration to him of Shahgarh, Gkursia, and Gatuda, from Sindh. In the subsequent Anglo-Afghan Wars also both Jaisalmer and Bikaner supplied camels for transport. In 1948 after the creation of Pakistan, irregular camel cavalry was raised in Jaisalmer to patrol the border with that country and was later merged with the Ganga Risala of Bikaner.

Kutch and Saurashtra (now in Gujarat) also had small camel units in their armies, but low revenues ruled out the creation of formal camel corps in these states. Jodhpur and Mewar were comparatively large and rich states, but while they had organised horse cavalry, infantry, and artillery units, the camel cavalry was left as part of their irregular forces. While the other military units of these states were merged into the Indian Army, the irregular camel troops dwindled away into the twilight of history. 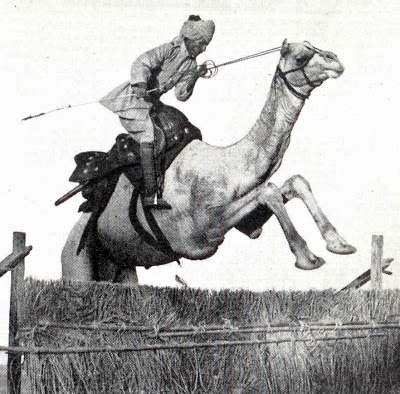 A rider of the Bikaner Camel Corps demonstrates a dangerous camel jump at the Golden Jubilee celebrations of Maharaja Ganga Singh’s reign. The camel is not built for jumping hurdles because its spindly legs are not meant for such exercise, but the centuries of using camels in warfare gave the Bikaner soldiers the ability of training camels to jump. It still remained a dangerous stunt, despite the training, because a badly timed jump can mean certain death for the camel and rider.

The Bikaner Camel Corps, along with the irregular troops of the Jaisalmer Risala, became the 13 Grenadiers of the Indian Army and saw action during the 1965 and 1971 wars. Subsequently, this unit was converted into regular infantry while the camels became part of the Border Security Force (BSF). The BSF continues to use camels for patrolling the desert portions of the border with Pakistan. 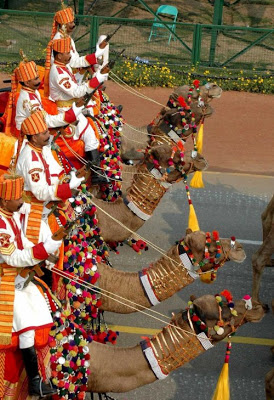 The BSF camel contingent marching down Rajpath on Republic Day, wearing the same gorgeous uniforms as the old Ganga Risala, with the logos and insignia of the Bikaner state being replaced by those of the BSF. Deputy commandant Amol Singh Rathore says, “When we march, we carry our legacy and tradition with us. It is a mix of heritage and modernity. The dress we wear is royal and has not changed since the camel contingent was raised by then King of Bikaner, Ganga Singh before 1900. The same camels are used for transport and war.”