An Open Letter to Kshatriyas 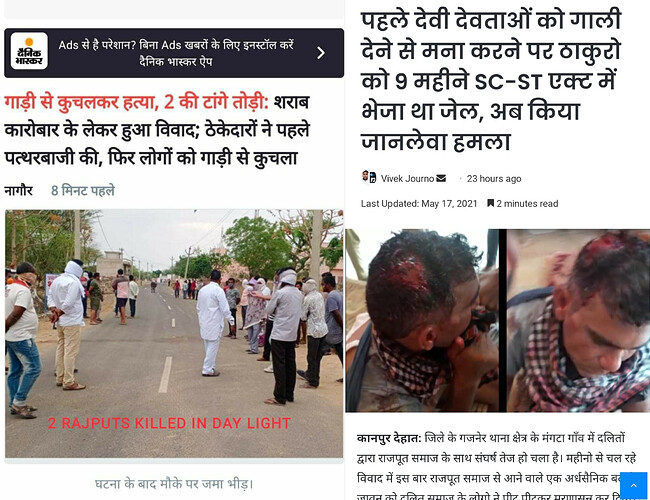 You have been at the receiving end of state sponsored, majoritarian violence right left and centre from Madhubani to Nagaur.
Rajputs slaughtered with impunity in broad daylight while the frail justice system watches as a mute spectator. You have been relegated to virtual second class citizens as the proponents of equality pontificate about new rising India free from the shackles of old feudal order which had held the nation for centuries from realizing it’s true potential.

Your women’s honor is sullied and besmirched day in ,day out. Your sacrifices are being laughed at. Your achievements have been reduced to perpetual Mughal subordination and British lapdogs. Every day, constantly, you are being reminded of the supposed sins your people committed. They call you beti givers and betrayers of Hindu cause.

Your Jhujhars/Bhomiyas/Saka-Jauhars are constantly ridiculed for propagating a system of patriarchal oppression and misogyny .

What exactly has happened to your self-respect? What is the root cause behind this debilitating pusillanimity that his gripped your spirit so much so that the mere thought of retaliation gives you shivers down the spine. Why are Rajputs of all people who were known for their characteristic idiosyncrasy of “vair” (revenge) are found lost for words when confronted with this sad reality.

Think, Think, Think. What is it that turned you into this hollow derelict soul less individual who seems to have permanently lost his vigour.

First answer is, your own backwardness. Your inability to rise to the occasion and see the writing on the wall. Your obduracy to acknowledge the changing times and power structure. Your wilfulness to refuse to learn and adapt. Your negligence and poverty that stripped off the last remaining vestiges of honour left. Your futile and impotent adarshvaad that proved to be the last nail in the proverbial coffin. Your ignorance and internal dissensions within the community that was taken of advantage by the other opportunists who were hell bent on your total extermination. Your lunatic tendency to extol and put the political pimps on the highest pedestal, professing loyalty to and declaring them as social/sena leaders.

Second answer lies in a well thought out psychological warfare. There was an official conspiracy that proclaimed every thing that defined and made you stand out as criminal. It had two major components. First, the carefully designed curriculum that sought to permanently guilt trap you into believing that everything substantially wrong with the nation was courtesy of the misdeeds of your ancestors your children were made to study the false tales of their ancestors being balatkaari despotic tyrants who regularly tormented and persecuted the local populace and that how they were the progenies of criminal intimidators. And on the flip side, they subtly started attacking your very identity, the rich cultural heritage, the peculiar social mores specific to Rajputs, your customs and traditions going as far as to attack your attire and moustache twirling habits. Your whole way of living was targeted. The idea was to model and shape the new generation of Rajputs into thick-witted, docile enslaved eunuchs who couldn’t even dream of rebelling against the regime thus permanently destroying the strength of their character. And this is the generation that is in the existence currently, silently tolerating the injustices with no outrage or willingness to stand up to discrimination and wrong doings.

You are the only community in this country that has been foolish into believing that everything on this land happens democratically …Only you consider the political and social pillars of this country as sacrosanct , which you must accept and never doubt the sanctity of . Only your hindutva is in danger.

Only that you are the one most ignorant about ground realities of this democratic set up where barely anything is democratic for your community. Only you are the believers and not bargainers. Only you are the ones stupid enough to elect those leaders who will barely stand for the rights of their people but rather sell you out for the vested interests and personal gains and even then it would be unfathomable for you to hold them accountable and answerable . Only you are stupid enough to hand over the leadership of the next generation to a bunch of cowardly half-wits who do not have an iota of courage to practice what they preach.