Two letters exchanged between the late 17th-century Mughal emperor Aurangzeb and his rebel son Akbar, in the course of the three year Rajput War (1679-82), reflect bigoted Aurangzeb’s hatred for the Rajputs. Translated from the original Persian (Manuscript No. 71 of the Royal Asiatic Society’s Library in London), these letters were published by the preeminent Indian Historian Jadunath Sarkar in his Studies in Mughal India. They formed part of the bitter exchange between Aurangzeb, who had invaded Rajputana in 1679 and imposed the jizya tax on all non-Muslims in India, and his son Akbar, who after some fighting joined hands with the Rajputs to overthrow his bigoted father.

Letter from Aurangzeb to Akbar

Muhammad Akbar, my son! close to my heart, a piece of my liver [as it were], dear as my life—be assured of and exalted with my sincere kindness, and know:- God be my witness, that I held you dearer and more beloved than all my other sons. But you, through your own ill-luck, were tempted by the deception and stratagem of the Rajputs, those Satans in human shape, to lose your portion of the wealth of Paradise and to become a wanderer in the hill and wilderness of Misfortune. What remedy can I contrive and what help can I give? My heart became plunged in extreme sorrow and grief when I heard of your present miserable condition of anxiety, perplexity, ruin, and wretchedness. Nay more, life itself tasted bitter to me; what need I say of other things? Alas! a thousand times alas! leaving out of your sight your [legitimate] pride of rank and majesty as a prince and Emperor’s son, you in your simplicity took no pity on your own [extreme] youth : you showed no regard for your wives and children, but in the most wretched condition threw [them] into the captivity of those beast-looking beast-hearted wicked Rajputs! And you are roaming in all directions like a polo ball, now rising, now falling, now fleeing!

Jaswant, the chief of Rajputs, assisted and joined Dara Shukoh, [but that prince] met with nothing save humiliation and reverses in consequence. Know for certain [that the same will be your fate, too.] Providence befriend you! God make it your lot to follow the right path.

Jaswant Singh was actually the Maharaja of Jodhpur, and the Rajput rulers of Mewar were considered the Head of all Hindu States (Hinduan Suraj), but in Jadunath Sarkar’s estimation of Rajput military power: “[Jodhpur] was the foremost Hindu State of Northern India at this time.” The aim of Aurangzeb’s Rajput War is described by Jadunath Sarkar as follows: “Mughal traders and Mughal armies would be able to pass easily from the capital [Delhi] to Western India and the Arabian Sea, the proud lord of Udaipur [Mewar] would be taken in flank, and a long wedge of Muslim territory would be driven right across Rajputana, cleaving it into two isolated halves which could be crushed in detail.”

Your Majesty has written, “Jaswant was the chief of the Rajputs; what sort of assistance and support he rendered to Dara Shukoh is known to the world. Hence the words of this false race do not deserve trust.” Your Majesty has spoken very well indeed but has not reached the marrow of the matter. In fact, Dara Shukoh bore hatred and antipathy to this race, and what he suffered was the consequence of it. If he had agreed with them from the outset, his affairs would not have come to such a pass.

Former emperors like Akbar had contracted alliance and kinship with this race and conquered the realm of Hindusthan with their help. This is the race with whose aid and support Mahabat Khan made the Emperor Jahangir his captive and meted out due punishment to the tricksters and deceivers. This is the race who, when your Majesty was adorning the throne at Delhi, and the Rajputs [there] did not number more than three hundred men, performed heroic deeds, whose initiative is manifest to the age; such heroism and victory [were theirs] as the commanders of the age have not heard of. Jaswant it was who in the midst of the battle with Shuja [Battle of Khajwa] displayed unpardonable insolence and violence to your Majesty; and yet your Majesty knowingly and deliberately overlooked his act. The same Jaswant it was whom your Majesty won over with many charms and soft speeches and detached from the side of Dara Shukoh, so that victory fell to your side. Blessings be on this race’s fidelity to salt, who, without hesitation in giving up their lives for their master’s sons, have done such deeds of heroism that for three years the Emperor of India, his mighty sons, famous ministers and high grandees have been moving in distraction [against them], though this is only the beginning of the contest.

And why should it not be so, seeing that in your Majesty’s reign the ministers have no power, the nobles enjoy no trust, the soldiers are wretchedly poor, the writers are without employment, the traders are without means, the peasantry are down-trodden? On the Hindu tribes, two calamities have descended, (first) the exaction of the jaziya in the towns and (second) the oppression of the enemy in the country.

How happy would it be if Providence so befriends [your Majesty] that leaving this work in the hands of the humblest of your sons, your Majesty seeks the blessedness of going on a pilgrimage to the Holy Cities [Mecca and Medina], and thereby induces the whole world to utter praises and prayers for you! Hitherto your Majesty has spent all your life in the quest of the things of this world - which are even more false than dreams, and even less constant than shadows. Now is the proper time for you to lay in provisions for the next life, in order to atone for your former deeds, done out of greed for this transitory world against your august father and noble brothers in the days of your youth. 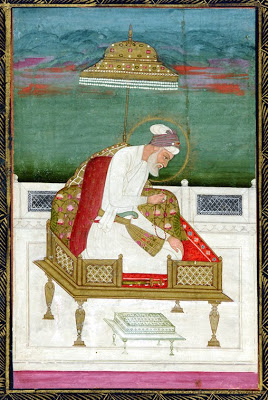 Above, Aurangzeb in his old age. While some historians claim that the deadly hostility breathed against Rajputs by Aurangzeb in his letter is a reflection of the ongoing war, Jadunath Sarkar points out that the bigotry of Aurangzeb had been apparent even when he was still young and posted as Subahdar in the Deccan: “Evidently there was no love lost between him and the Rajputs already. People perceive instinctively when they are disliked, and though they may be wrong in guessing the cause, their feelings always indicate correctly the spirit in which they are treated.” Aurangzeb’s well-documented temple destruction in the Mughal provinces was repeated in the Rajput Kingdoms during this long war, with 240 Hindu temples brazenly demolished in Mewar alone, and only repaired and rebuilt when a humbled Aurangzeb was forced to withdraw his armies and sign a peace treaty with its ruler.