Camel mounted units of the Indian Army (13 and 17 Grenadiers) carried out cross-border raids and captured Pakistani territory along the international border in Rajasthan during the 1965 and 1971 wars. The 13 Grenadiers were the Bikaner and Jaisalmer Princely States’ contribution to the Indian Army, and further traced their ancestry to the medieval armies of those Rajput States which had been using camels in warfare for centuries. The above miniature painting portrays a medieval Rajput camel rider bearing arms like the bow and arrow, as well as sword and shield on his camel, which is accoutered in traditional gorbandh and has a double-seated saddle.

In the ancient Vedic texts of India the Sanskrit word for camels is ushtra, which over the centuries evolved into uttra (Prakrit) and unta (Apabhramsa). Camel bone remains have been found in the Bronze Age civilization spread across the plains from the Sindhu to the Saraswati River in North India. Daimabad in Maharashtra has a camel depicted on a pottery fragment from the chalcolithic Jorwe culture (1300 BCE).

The Markandeya Purana says that the camel is born out of the feet of Brahma and the only God with a camel as his mount is Virupaksha. The Goraksha Samhita says that Goddess Kalakarni has a camel as her vehicle, and Hemadari assigns a camel mount to Vikata Gauri. This latter Goddess has been mentioned in the Harsanatha temple at Sikar (Rajasthan) built by the Chauhan Vigraharaja II (973 CE). In later times Ustravahini Devi or Unta Devi, is the family deity (Kula Devi) of the Pushkarna Brahmins. Images of Unta Devi are also found in Orissa. The Goddess Mahamaya, Kula Devi of the Jadeja Rajputs who ruled Kutch for centuries, also has a camel as her mount. 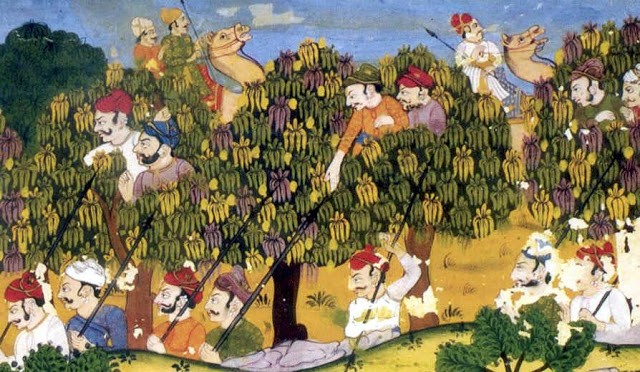 A Rajput miniature painting depicts camels with mounted lancers in the background of a hunting scene. A depiction of camels in warfare occurs at Nadol (South Rajasthan) where a memorial tablet shows a camel-rider with sword (1673 CE). A 9th century Pratihara panel from Mandor (West Rajasthan) shows a cart drawn by a camel, and a force of camels formed part of the Pratihara army. Sculptural representations of the camel are found in the Rajasthani temples of Merta, Kiradu, Badoli, Chittor, and Eklingaji. Camels in the Dhola-Maru romance theme are represented in many other temples and forts across Rajasthan.

From the ancient period, a camel rider is depicted in one of the friezes of the Sanchi stupa (Sunga period). Panini in Ashtadhyayi calls camel riders Ushtra-sadi, while mule and camel corps in ancient Indian armies were called Ushtra-Vami and used for transport. It becomes apparent that camels generally were used for transport, but in the regions where they were bred, particularly Rajasthan, camel cavalry was known from early times. The local Raika pastoral community bred and maintained camel herds.

Both horses and camels have to be trained extensively before they can be used in battle. Camels can bear greater loads than horses, are much hardier, cover long distances without water, and can be as fast. Camels of the Jaisalmer breed are trained to race and can cover 100 miles in a single night. But in general, camels are considered less intelligent and cannot do certain vital tasks. For example, a well-trained horse will charge and trample over infantry, disregarding sword cuts, spear thrusts, and flights of arrows, but a camel will not. Horses were trained to stand firmly before artillery fire and charge into armies wielding firearms, while camels would shy away even from a distant fire.

Horses are also easier to group together into formations. The Rajput’s prized horses above all, particularly when their utility became apparent in resisting the Turk invaders. However a Rajput warrior from the 14th century, named Pabuji Rathod, is worshiped as a deity by rural Rajputs, camel herders, and shepherds; he was said to have made improvements in the use of camels, protected cows, and to have slain in battle the Muslim governor of Patan (Gujarat). Pabuji’s story reflects the growing power of the Rathod clan in Western India during the late 14th century when the Delhi Sultanate had fragmented and the Rathods had formed a large independent Hindu Kingdom in Marwar. 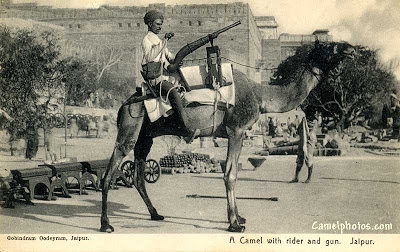 The development of firearms gave a boost to the deployment of camels in warfare. With their ability to bear loads, camels, in addition, provided an elevated and mobile platform for delivering artillery fire. A kind of swivel-gun shown above was first used in Asian armies and was alternatively called zamburak or shutarnal (shutar is the Persian term for camel derived from the Avestan and Sanskrit Ushtra). When firing, the camels were made to kneel and their legs were tied together. These served as a kind of mobile light artillery till the early decades of the 19th century when horse-drawn galloper guns, with greater range and firepower, came into use.

In the Kingdoms of Rajasthan and Gujarat, camel mounted troops continued to be used for patrolling and policing down to the 20th century, and each state maintained camel breeding herds (tolas). The most famous of the active war camel units was the Bikaner Camel Corps, named the Ganga Risala, after Maharaja Ganga Singh who was its founder. Rajasthani camels were utilized for transport service in the 19th century Sindh and Afghan campaigns of the British.

Camel breeds and the camel trade

An illustrated folio of the Akbarnamah depicting the 16th-century Mughal siege of Champaner in Gujarat. The two camels are probably the twin-humped Bactrian breed and are carrying naggada beaters. Such foreign breeds were less resistant to heat and Indian camel breeds from Baluchistan westwards began to be used by Mughal armies primarily for transport. Baloch camel traders are shown as forming the long tail of Aurangzeb’s army that caused so much devastation in the Deccan Wars late in the 17th Century. Jadunath Sarkar wrote in his History of Aurangzib: “The worst oppressors of the peasants, however, were the tail of the army…Particularly the Beluchi camel-owners who hired out their animals to the army, and unattached Afghans searching for employment, plundered and beat the country people most mercilessly.”

Across many parts of India, particularly the west and northwest, and in the interiors of the peninsula, the dry conditions make the use of camels for transport and as fast couriers essential. Such conditions worsen in the countries on India’s western borders, and camels were the only means to carry the annual burden of the extensive medieval trade to and from India; until the European domination of the sea, trade ended the importance of those land routes. While different breeds of Indian and foreign camels were traded and utilized in the armies of Indian Kingdoms, the purity and distinct characteristics of Indian breeds were maintained at least in Rajasthan and Gujarat. Camels of the Mewar breed are noted for their ability to carry loads across the hilly terrain. In this miniature painting Mewari camels bear Rajput nobles out on a hunt in the forested Aravalli range. In the past camels were bred in many states, but today the National Research Center on Camel recognizes four distinct breeds: Bikaneri, Jaisalmeri, Kutchi, and Mewari. Camels of the Marwar breed were considered distinct in the past and the state of Jodhpur had camel sowars in its army, but today northern Marwar is included in the breeding ground of the Bikaneri breed while camels bred in southern Marwar are considered part of the Jaisalmeri breed.

One unique facet of camel breeding in India is that communities associated with this task, like the Raika and Rabari, do not eat its flesh which is common for camel pastorals in other parts of the world. Camel meat, in general, is not acceptable to most other communities in Rajasthan and Gujarat. The Raika grooms come seated on a camel for their weddings, and the community has accumulated a vast pool of knowledge on camel characteristics, training, and disease treatment. Camels are used for ploughing and drawing water in Jaisalmer, and camel products like milk, hair, bones, intestine, and leather, are an important part of the local economy. Camel grazing is also more environmentally friendly than in other livestock.