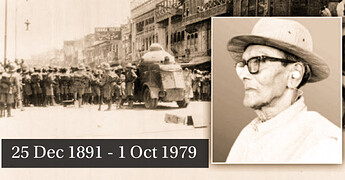 Veer Chandra Singh Garhwali (25 December 1891 – 1 October 1979) is remembered in Indian history as the hero of the Peshawar massacre. On 23 April 1930, the soldiers of the Royal Garhwal Rifles under the leadership of Havildar Major Chandra Singh Garhwali refused to open fire on the unarmed Pathans fighting for India’s independence. Without firing a bullet, without detonating a bomb, there was such a huge explosion in Peshawar that suddenly even the British were stunned, they felt the ground slipping under their feet.

Chandra Singh Garhwali was born on 25 December 1891. Chandra Singh’s ancestors belonged to the Chauhan dynasty, who lived in Moradabad, but long ago he had settled in Chandpurgarh, the capital of Garhwal and started serving the wholesalers here. Chandra Singh’s father’s name was Jalouth Singh Bhandari. And he was an illiterate farmer. That is why he could not educate Chandra Singh too, but Chandra Singh had learned to read and write by his own hard work.

After the end of the First World War, the British began to remove many soldiers and those who were promoted during the war, their posts were also reduced. Chandra Singh was also there. He was also made a soldier from a sergeant. Due to which he made up his mind to leave the army. But they were explained by the higher officials that their progress would be taken care of and they were also given some time off. During this time Chandra Singh came in contact with Mahatma Gandhi.

After some time he was sent to Baziristan in 1920 along with his battalion. After that, they got promoted again. After coming back from there, much of his time was spent with the workers of Arya Samaj. And the feeling of love for the country was born in them. But the British did not like this and they sent them to Khyber Pass. By this time Chandra Singh had attained the rank of Major Havildar. 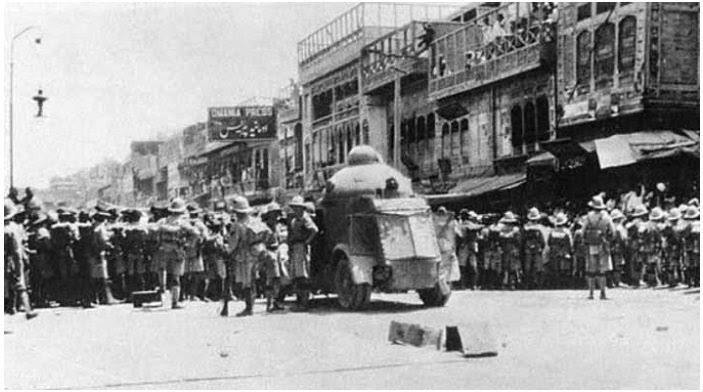 At that time the flame of freedom struggle was burning in full force in Peshawar. And the British were trying their best to crush it. For this work, on 23 April 1930, he was sent to Peshawar. And ordered to attack the agitating people. But he refused to open fire on unarmed people. This gave high status to the Garhwali battalion in Peshawar Revolt and since then, Chandra Singh got the name of Chandra Singh Garhwali and came to be considered the hero of Peshawar Revolt.

These soldiers were prosecuted for not obeying the British. The Garhwali soldiers were advocated by Mukundi Lal who after tireless efforts converted their death sentence into a prison sentence. During this, all the property of Chandra Singh Garhwali was confiscated and his uniform was cut off from his body.

In 1930, Chandra Singh Garhwali was sent to the Abbottabad jail for 14 years of imprisonment. After which they were transferred to different jails. But his sentence was reduced and after 11 years of imprisonment, he was freed on 26 September 1941. But their entry was restricted. Due to which he had to wander here and there and in the end he went to Wardha Gandhiji. Gandhiji was greatly influenced by them. In the Quit India Movement of 8 August 1942, he took an active part in this movement by staying in Allahabad and was again arrested for three years. They were liberated in 1945. 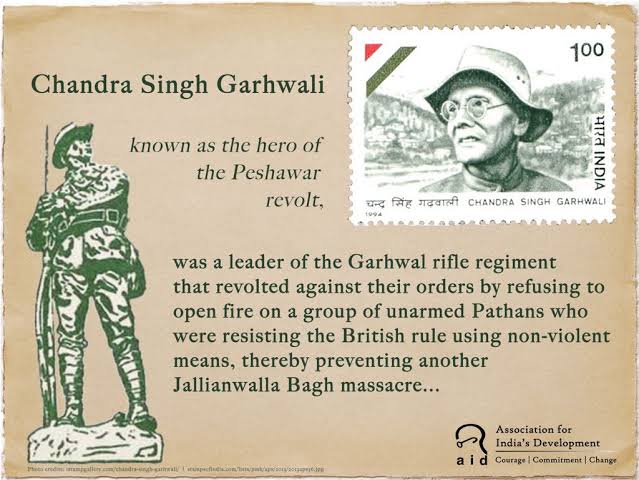 On 22 December 1946, due to the cooperation of the communists, Chandra Singh was able to enter Garhwal again. In 1967, he contested the election as a candidate of the Communists, but he did not get success in it. On 1 October 1979, Chandra Singh Garhwali died after a prolonged illness. A postage stamp was also issued in his honour by the Government of India in 1994. And many roads were also named after him.