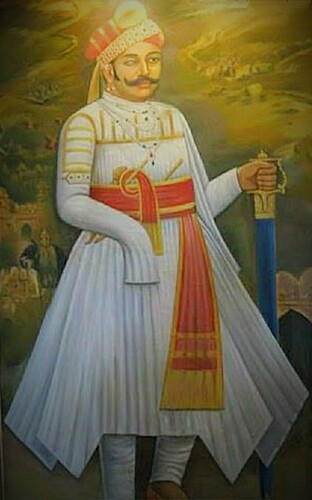 On the death of Sultan Sikander Lodi in A.D. 1517, his son Ibrahim succeeded him. He was engaged in putting down the revolts of his nobles when news of Sanga’s encroachments reached him. He prepared an army and marched against Mewar. The Maharana advanced to meet him and the two armies met near the village of Khatoli on the borders of Haravati (Haraoti). The Delhi army could not stand the onslaught of the Rajputs, and after a fight lasting two pahars (5 hours), it gave way and fled, followed by the Sultan himself, leaving a Lodi prince prisoner in the hands of Sanga. The prince was released after a few days on payment of a ransom. In this battle, the Maharana lost his left arm by a sword cut, and an arrow made him lame for life.

The resources of Ibrahim were so crippled by this war with Sanga that he could not renew the contest for some time. However, he carefully, nursed his desire to be avenged on Maharana Sanga for the disastrous defeat inflicted by the latter at Khatoli. And when the rebellion of Islam Khan, which had assumed serious proportions, was suppressed, the Sultan began to prepare an army to attack Mewar. The foremost generals of the kingdom, Mian Husain Khan Zar Bakhsh, Mian Khan Klianan Farmuli and Mian Maruf “who were the chief commanders in the army of Sultan Sikander” and “were the bravest men of the age and could have instructed even Rustam in the art of war” led this expedition, with Mian Makhan as commander-in-chief.

When this army reached the Maharana’s territory the Maharana advanced with his Rajputs. As the two, armies came in sight of each other near Dholpur, Mian Makhan made dispositions for the battle. Said Khan Furat and Haji Khan with 7,000 horsemen, were placed on the right; and Daulat Khan, Allahabad Khan and Yusuf Khan commanded the centre. The Sultan’s army was fully prepared to give the Maharana a warm reception. The Rajputs, with their accustomed valour, advanced and fell on the Sultan’s army, and in a short time put the enemy to flight. “Many brave and worthy men were made martyrs and the others were scattered.” This battle took place about A.D. 1518. The Rajputs pursued the fleeing remnants of the Sultan’s army up to Bayana.

By this victory, all that part of Malwa which had been usurped by Muhammad Shah (Sahib Khan), younger brother of Sultan Mahmud Khilji II of Mandu, during his rebellion against his brother, and had subsequently been taken possession of by Sultan Sikander Lodi, father of Sultan Ibrahim, now fell into the hands of the Maharana. Chanderi was one of the many places which fell into the hands of the Maharana, who bestowed it on Medini Rai.