Lohri , the Punjabi Folklore and Rajput history behind it- the Peasant Rebellions led by Bhati chiefs against Emperor Akbar. Most people know of Lohri as a festival of the Punjabis where they build a bonfire, dance, offer jaggery and grains to the fire and of course, indulge in lots of dancing. The story behind these traditions is in fact a tale of valour, rebellion, and revolution, initiated by Rai Abdullah Khan Bhatti fondly referred to as Dulla Bhatti.

Dulla’s father and grandfather were Muslim-Rajput landlords (zamindaars) of Nankana Sahib in Sandal Bar region of Punjab who opposed the taxation system levied by the Mughal empire under Emperor Akbar. They refused to pay the new taxes to the local ‘Faujdar’ (military officer appointed to collect taxes). There were frequent skirmishes between the Bhatti landlords and the Faujdar’s armies where the Bhattis pushed back and defeated the Mughal forces. Ultimately, Emperor Akbar called for their arrests and execution. They were executed 4 months before Dulla was born.

What happened from this point onwards is part folklore, part history.
Some theories believe that when Prince Salim was born, an astrologer convinced Akbar that the only way the Prince would grow up to be a strong ruler was if he was nursed by another woman whose son was born on the same day as the Prince. This woman was none other than Dulla’s own mother Ladhi who is said to have given birth to Dulla on the same day as the Prince.

It is said that in their early years, both Dulla and Salim (who would grow up to be Emperor Jehangir) were raised in the same household by Ladhi. Another legend also says that while it was typical to touch jaggery to the newborn’s mouth as the tradition of ‘Gudhti’, Ladhi touched a shining sword to Dulla’s mouth at birth, because she knew he would grow up to avenge his father and grandfather.

As the years went on, Ladhi hid her husband and father-in-law’s weapons in a closed room and kept their history a secret from the headstrong teenage Dulla. When Dulla and his friends created mischief in the village by damaging women’s water pots with their catapults, a village woman taunted him by saying, “Why do you show your strength here to women and poor people? If you are so strong, go and avenge your father”. This made Dulla ask his mother to tell him the truth and she finally opened up the secret room full of weapons. Dulla’s young blood and courage led him to form a band of highway robbers along with his friends using these weapons. They would steal from the rich traders and distribute the goods to poor villagers Dulla became a saviour for the poor.

One such poverty-stricken Brahmin landed at Dulla’s camp with a special plea. He had two young and beautiful daughters Sundari and Mundari, who were betrothed in another village. He was too poor to afford a wedding, let alone two. Meanwhile, the local Mughal officials had their eye on the girls and a delay in their weddings would mean that they could be carried off any moment by the soldiers to be kept as slaves. Desperate to save his daughters, the Brahmin implored Dulla for help.

Dulla vowed that he would make sure the two girls would be safely wed to their betrothed and told the Brahmin, “Your daughters are my daughters”. He started a donation campaign in the neighbousring villages and people donated jaggery and grains in small and large amounts for the double wedding. On the wedding day, Dulla lit huge bonfires along the path to ensure safe passage for the wedding party. 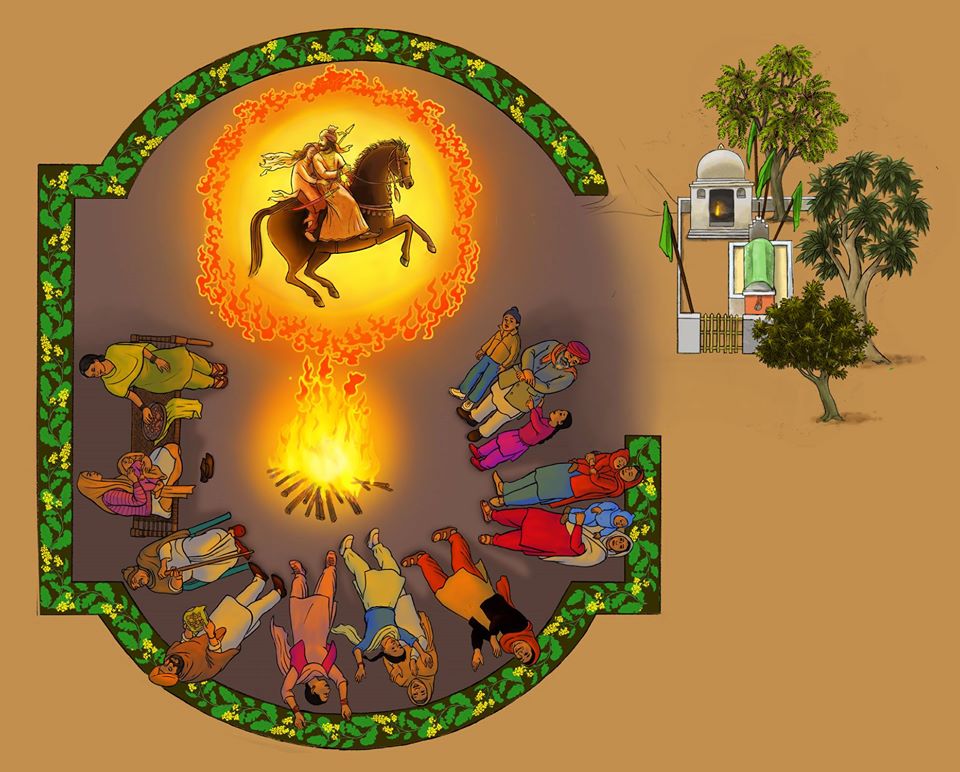 This is why Lohri is celebrated by lighting bonfires and offering jaggery and grains. The famous folksong “Sundar-Mundriye” is sung with gusto:

Who will think about you

Dulla of the Bhatti clan will

He gave one seer of sugar!

The girl is wearing a red suit!

But her shawl is torn!

Who will stitch her shawl?!

The uncle made choori! (dish prepared with roti, desi ghee and sugar)

Landlords are beaten up!

One simpleton got left behind!

The soldier arrested him!

The soldier hit him with a brick!

Whether you cry, or bang your head later!

Give us Lohri, long live your pair (to a married couple)!

As Dulla’s reputation spread across the neighbouring areas, the landlords grew bolder and stopped paying taxes, as the Faujdars themselves were unable to enter Dulla’s territory. However, Dulla’s rebellion came to an abrupt end when after repeated defeats on the battlefield, the Mughal officers offered to meet and make a peace treaty with him. But this negotiation meeting turned out to be a trap and the officers poisoned his food which made him unconscious and thus he was captured, and eventually hanged to death in 1599. The famous Sufi mystic Shah Hussain recounted Dulla’s dying words, “No honourable son of Punjab will ever sell the soil of Punjab".

To this day, the people of Punjab remember this brave warrior with a heart of gold. On the morning of the Lohri day, young children team up to visit every house in their locality and sing the ‘Sundar-Mundriye’song that commends Dulla and his giving of the Lohri gift to his daughters, as a suggestion to the owner of the house to give them presents in the same way. Normally, the children are given small amounts of money to buy treats, sweets like gajak or rewri or eatables such as popcorn, til (sesame) seeds, peanuts, sugar or jaggery. If the gifts please them, they [sing]
"Dabba bharaya leera da (Box filled of cloths strips)
"Ai ghar ameera da (This house is of the rich)"

But if they do not receive anything from a house, they chant:

This year as you wish someone a Happy Lohri, do remember the young revolutionary who was called a ‘dacoit’ by the Emperor but was beloved by the poor as their champion, their Robinhood - Dulla Bhatti.