This article was initiatially published here

The irony is that the Leftist Academicians who otherwise often assert that India is a mosaic of many nationalities, while opposing the Hindutva’s sinister policy of homogenization, have themselves always reduced the Medieval Indian History to the history of only Delhi and the history of Delhi has been made the history of Turk or Mughal emperors alone 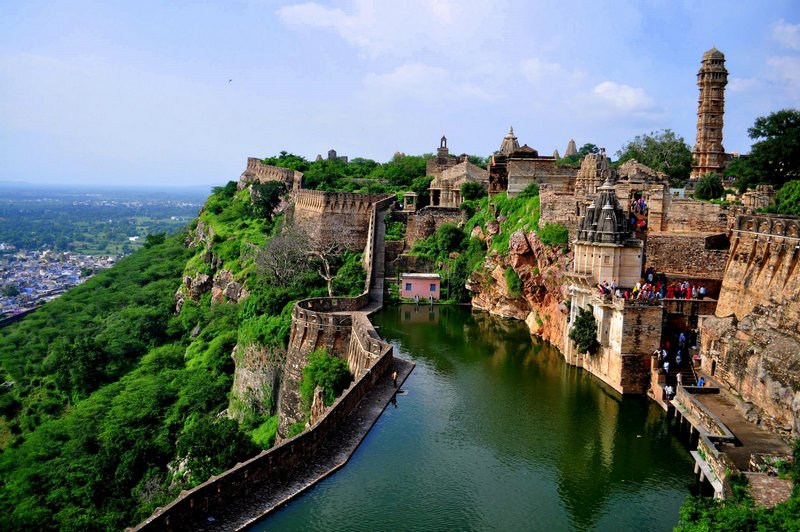 This 9th of May marked Pratap Jayanti, the birth anniversary of the eponymous Hindu Rajput often given the same legendary status in Rajasthan as Abdullah Bhatti is gven in Punjab or Shivaji in Maharashtra as part of local folk-traditions. Just like the previous year it was characterized by rhetoric on part of the exclusive Hindu-rightists with another cycle of appropriation to vilify Emperor Akbar with the aim of continuing the perennial “Hindu versus Muslim” binary . This saw reaction from the inclusive Left-liberals coming to the rescue of the emperor to show that how he was a greater ruler and Pratap just a warrior – the Right makes comparisons and the Left follows to do exactly the same as if the Emperor’s greatness necessitates trivialisation of the latter’s role in his regional society’s history. Thus while the Hindu Right creates a communal binary using two medieval historical figures and the Secular Left continues with the same binary only taking a different stand. Much of the colonial and post-colonial “Hindu versus Muslim” binary is centered around the History of northern and especially north-western parts of the Subcontinent, which begs focus over this region.

The Greek kingdoms of the North-western parts of South, were followed by the Kushan Emperors belonging to the Chinese Yuezhi tribe. Scythians established several satraps here and with the decline of Guptas , this part came to be inhabited by Huns. BS Nijjar in his Origins and History of Jats and Allied Other Nomadic Tribes traces Pathan and Baloch identities to Huns and Scythians. The same goes for Rajputs of North-western areas . While the Aryan Invasion Theory is mired with controversy due to politics surrounding it, the long list of well-recorded foreign invasions which also includes Abhiras (supposed ancestors of Ahirs and Gwalas of Central India), Kambojas (ancestors to Kambohs) only conclusively shows that substantial number of people from Kandahar to Purvanchal remain descendants of invaders/migrants from Central Asia coming at different times, indigenizing and as locals defending the land against next batch of invaders. Historically the term mlechha (i.e. barbarian) was used by Sanskrit authors for the above set of invading tribes long before Turks and Mughals came in the scene. This proves the fallacy of Hindu-Right’s perception of “Turks & Mughals as the only invaders or mlechhas and the rest being Mulnivasis (aborigines)”. But by being fixated with Mauryans and Guptas of Pataliputra while writing Ancient Indian History, our Left historians lose a good opportunity of answering Hindu-Right’s xenophobia towards mleccha .

India’s ‘Marxist historians’ (some of who I otherwise admire) have always been favorably deposed towards Turkish or Mughal Emperors of Delhi as compared to Rajputs, Jats, Gujjars, Gakkhars, Kambojas etc. Perhaps it is an extension of their justified abhorrence of Brahminism which makes many of them see Islam, like Buddhism, a remedy to the menace of Hinduism. Hence, their binary of egalitarian Turks and Mughals versus caste-ridden Rajputs, Jats etc. Though Brahminism has its ill effects over the Hindu section of the latter set of communities, it is difficult to imagine the Turks and Mughals on the other end of the spectrum i.e. egalitarian, given that they too were feudal who over a period of time like most invaders to South Asia adjusted themselves in the upper strata of the feudal caste-clan system.

While the Hindu-Right sells opinion by distorting history, the Left sells opinion by omission and selective reading of it. It is not just the pastoral communities like Gujars, agrarian ones like Jats or Ahirs and subaltern communities like Gonds etc which are rarely mentioned in Indian history; Rajputs a collection of local ruling patrilineal clans both Central Asian ones and Aboriginal ones, whose study is indispensable to the study of local histories from Chitral in Pakistan to the Vindhyas, are referred to on the sidelines mostly while discussing the conquests or instability of Turk or Mughal Empires. While Mughal and Turk contributions are highlighted, the contribution and histories of these communities is mostly omitted — though much of the political, administrative and cultural aspects of regions beyond Delhi – many urban centers of these regions owe their existence to these communities. Delhi was established by Tomars; Bhatinda, Sialkot, Jaisalmer were established by Bhatis or Bhattis; almost all cities of Rajasthan were established by Chauhans, Rathores etc; many cities of western UP and MP had imprints of other Rajput tribes of that region; Jammu , Rajouri and Poonch were established by Dogra-speaking tribes; but these things are rarely mentioned. The Gurjar-Pratihara Emperors that ruled India’s Western states for three centuries until early 11th century and was instrumental in stopping Arab invaders from crossing Sindh, is just touched upon. Opposing the Hindu Right-wing’s prudishness, often Khajuraho is mentioned, but hardly any mention about the Chandels of Central India who commissioned it. The Pahari Rajput kingdoms of Himachal-Garhwal-Kumaon are not even mentioned. This omission of so many local Hindu dynasties and their contribution, by Leftist historians of Medieval India only helps promulgate the phrase “Muslim Rule” which only helps Hindutva’s narrative of “oppressed Hindus and oppressive Muslims”. In fact this is an evidence that native non-converts of these parts of South Asia may have lost some sovereignty but they never lost the political, administrative and cultural influences in their respective nationalities.

Historians talk about Mughal pluralism but people hardly know that Rajputs are not just Hindus but also Muslims and Sikhs. Muslim Rajput dynasties that were spread across the subcontinent also don’t find space in Indian textbooks. The first Sultan of Gujarat and the founder of Muzzafarid dynasty was not a Turk Zafar Khan whose father Sadharan was a Tanka Rajput convert to Islam by historians; it is worth noting that it was Ahmed Shah I from this very dynasty who established Ahemdabad. The Sultans of Punjab were again Janjuas; the other Muslim rulers in Punjab were Bhattis and Khokhars. The festival of Lohri originated as a celebration of Rai Abdullah Bhatti ‘s struggle against Emperor Akbar. As per Tarikh-i-Azamgarhia the famous Azamgarh of UP, once den of Indian Revolutionaries , was established by a local ruler Azam Khan – a Gautam Rajput .The Arab Ummayid rulers of Sindh were replaced by the local Muslim Soomra tribe (Rajput), and which in turn was replaced by the Samaa Rajput tribe (Muslim) .The Rathores of Mirpur-Muzafarabad tract have been Muslims for many centuries and the Jarral Rajputs who ruled Rajouri tract for centuries have been Muslims since almost a millennium. There are many such evidences to show that large number of Muslim rulers continued to be local converts. This demands answer to the question what is “Muslim history”? Since each time the phrase is used, commentators from Left to Right point towards the Turk or Mughal Emperors sitting at Delhi, forgetting all the above.

It deconstructs the “conversion by sword alone” theory as significant population of non-convert minority continued to enjoy much freedom in West Punjab or Sindh even when the local Rajput rulers embraced Islam and it also puts several question marks over the “conversion for caste-liberation” as most lower castes of Hindu Rajput ruled Rajasthan continued to follow native beliefs even as a significant minority from dominant castes ie Rajputs or Jats here embraced Islam.

Furthermore, instead of the usual apologia for Turk or Mughal rulers, presenting the above examples goes a long way in overcoming the Hindu-Muslim religious divide.

History of Medieval India or just that of Turk and Mughal rulers of Delhi?

The region surrounding Delhi called Mewat has many villages inhabited by Meos , a local agrarian community which embraced Islam in 14th century and has a history of leading rebellions against Delhi. They are Muslim counterparts of the Meena tribe of Dhundar region of Rajasthan and under their leader Raja Hasan Mewati had resisted Babur at Khanwa. But the history of India as we read in our books never covers them, nor are other regional nationalities ever discussed. The irony is that the Leftist Academicians who otherwise often assert that India is a mosaic of many nationalities, while opposing the Hindutva’s sinister policy of homogenization, have themselves always reduced the Medieval Indian History to the history of only Delhi and the history of Delhi has been made the history of Turk or Mughal emperors alone. Our obsession with Turks or Mughals of Delhi, makes us only more ignorant of the history of other parts of India and also the history of other communities (Hindus, Muslims or anyone) furthering the “Hindu vs Muslim” binary. Things become worse when history of South India is merely briefed upon and worse the history of North-East and Kashmir completely omitted which only breeds alienation. The Hindutva appropriation of the Assamese Lachit Borphukan is also a consequence partly of this omission The Hindutva project of Saffronisation of history only continues to be complemented by omissions on part of India’s Left-liberal historians.

There is a desperate need for a more inclusive reading of the Indian History, which rightists will never provide and the Leftists have failed to provide, if the 'Hindu versus Muslim" binary is to be seriously challenged. While detailed discussion of all the communities of India may be cumbersome, there is a necessity to discuss history of regions other than Delhi for a holistic and more enlightened understanding of the Indian history, which is the only way to combat Saffronization of Indian history.