Gen Zorawar Singh Kahluria was born in a Rajput family of Kahlur, now called Bilaspur in Himachal Pradesh in 1786. Very little is known about his early life. He left his home at an early age of 16 and took up a job as a private servant of Rana Jaswant Singh, Jagirdar of present-day Ramnagar. It was here that he learned riding, archery and swordsmanship.

Capture of Ladakh and Baltistan

Afterwards he joined as a sepoy of Kiladar of Reasi. Being brave, intelligent and enterprising he won favours of his master. Kiladar assigned him the duties of carrying messages to Raja Gulab Singh at Jammu. It was during one of these meetings with Raja Gulab Singh when he brought into his notice certain flaws and wastages that were occurring in Raja’s supply department. He even gave an alternative plan of supplies.

When implemented, the new plan effected lots of savings. Impressed, Gulab Singh promoted him as inspector of the commissariat of supplies for all the forts North of Jammu. After the occupation of Kishtwar in 1821, he was made its Hakim (Governor). Later when Gulab Singh became ruler of Jammu in 1822, he elevated Zorawar Singh to the status of Governor of Reasi, Arnas, and Kussal and awarded him the title of wazir.

It is not certain whether Gulab Singh had the conquest of Ladakh in mind when he made Zorawar Singh Hakim of Kishtwar which was the gateway to the Himalayan Kingdom of Ladakh. But the year 1834 must be considered as a landmark in the Indian Military History when he decided to extend the boundaries of Maharaja Ranjit Singh’s empire to Ladakh which till the 15th century was part of Tibet and was ruled by dynasties of local Lamas.

An attempt at direct conquest of Ladakh was not without great risk and Zorawar Singh could not have been unaware of it. Severe cold and barrenness of the country were the inhibiting factors which could not be overlooked. Strategic, tactical and administrative preparations were made accordingly. Having made all the preparations, Gulab Singh waited for an opportunity to launch the invasion. He did not have to wait long. Raja of Sant had captured some areas of Raja of Timbus. Latter had lodged a complaint to their lord, Tsepal, the Gyalpo (King) of Ladakh. Knowing that Raja of Timbus has got no redress from Gyalpo, Gulab Singh found it quite convenient to exploit the God-sent opportunity and sought his help. Once assured of help, he ordered Zorawar Singh to march into Ladakh. With his troops already in a state of readiness, Zorawar Singh lost no time to enter Ladakhi territories in April 1834 with an Army of 4000 – 5000 Dogra warriors. It is believed that before doing so Gulab Singh had sounded Maharaja Ranjit Singh to ensure that this invasion was not questioned or interfered with.

His forces entered Ladakh province of Purig in April 1834. After learning of the Dogra invasion Gyalpo declared an emergency and issued orders for the mobilization of his army. In all 20,000 men got mobilized for meeting the invasion. Although this hurriedly mustered manpower could hardly be called a well-organized fighting force but yet it was quite capable of giving Dogras a tough time. They had the terrain and climate on their side. Gyalpo rushed 5000 men to Sankhu to check Dogra advance. When Dogras reached Sankhu on 16 August 1834, they found their passage blocked. Ladakhis were mauled and routed from their positions in no time.

Having cleared Sankhu, Dogras advanced to Suru and occupied it. Dogras halted there for 8 days to rest and replenish. In order to win the goodwill of the people of conquered areas, Zorawar Singh prohibited his troops from cutting their ripe crop. This clever move paid dividends when zamindars of Suru not only submitted to Zorawar Singh but also placed them under his protection. This assured regular supply of food to his troops, offered voluntarily by zamindars.

Wazir built a fort there and named it ‘Kila Suru Kursi’and took over the unoccupied fort of Shakhar. To establish Dogra rule over occupied areas, Zorawar Singh imposed a tax of Rs. 4 per house. Having consolidated his occupation, Zorawar Singh left a platoon in Suru Fort and a section to guard Suru Bridge and advanced to Lang Kartse which was easily occupied.

Here they spent a month in a defensive position. Seeing Dogras in a defensive position, Minister of Stog who had suffered a defeat at Sankhu, waited for the winter to set into counterattack Dogras in defensive positions. On the first heavy snowfall, he launched an attack. Having miscalculated Dogra’s ability to fight in extreme cold, lost the battle and his own life. Zorawar Singh who had contemplated to spend winter at Lang Karste, now decided to pursue the Ladakhis. Thus staying in defensive position himself, he sent 500 men under Mehta Basti Ram in their pursuit. He faced no opposition till Sod where King of Ladakh had dispatched 4000 men.

Marching swiftly, Dogras reached Sod at the heels of fleeing Ladakhis and laid a siege to the fort. The fort was assaulted after 10 days of siege and forced to surrender. This cost Dogras 40 warriors but succeeded in preventing two Ladakhi forces to unite against them. Zorawar Singh also joined Mehta Basti Ram at Sod seeing which Banka Kahlon, the commander of Ladakhi forces thought it prudent not to attack but to wait for more opportune moment.

The Gyalpo also thought of waiting for severe winter to set in to join battle with Dogras. To delay for a month, Gyalpo played a ruse by which Zorawar Singh seems to have been taken in. Dr. Henderson, a British, who happened to be at Leh, was detained under duress and made to appear as the envoy of East India Company, having come with an offer of assistance to the Ladakhis against Dogras.

The information was leaked out to Zorawar Singh. For once Zorawar Singh seems to have been outwitted by the Gyalpo. Halting further advance he apprised of this ruse to Gulab Singh who in turn approached Maharaja Ranjit Singh to clear the matter with East India Company. It took about a month for the contradiction to be received by which time Ladakh was in the throes of severe winter and just the time for Ladakhi’s counteroffensive.

Ladakhis offensive opened with a treachery. Banka Kahlon feigned a desire to negotiate and sent his envoy. Zorawar Singh welcomed the move and on the suggestion of Ladakhi envoy sent his envoys for talks. They were treacherously killed and thrown into the river. Before the Dogras learnt of this, they had been heavily attacked from the rear. 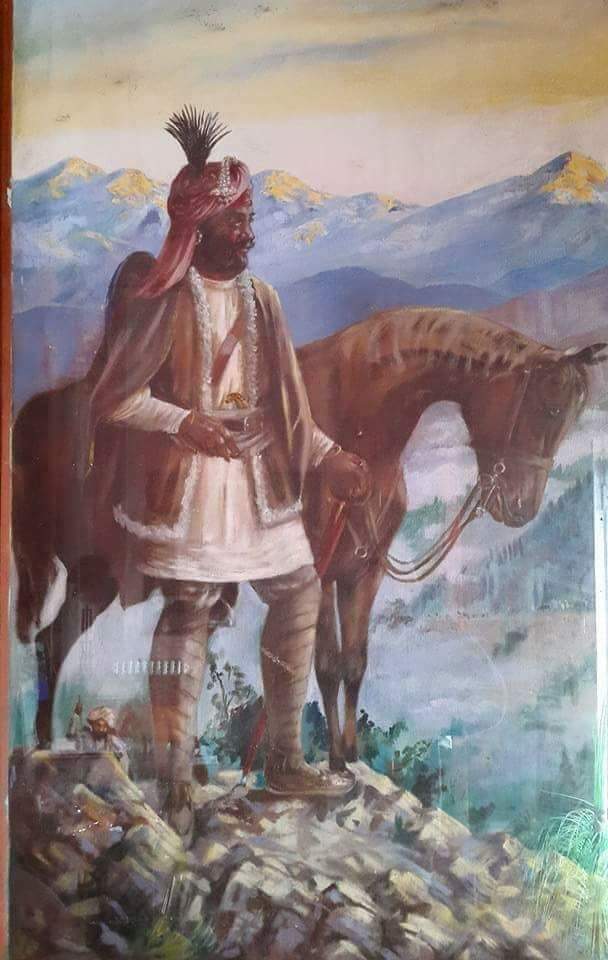 Dogras were taken by surprise and many were taken as prisoners, ultimately thrown into the river with hands and feet tied. Zorawar Singh was thus compelled to retreat to Lang Kartse and take shelter in the fort of the Sultans. Luckily he was not pursued by Ladakhis. Although Dogras were thrown off balance but had not been routed as such.

A force was still intact and beyond the capability of Ladakhis to crush. Ladakhis marched towards Lang Kartse where Dogras were positioned. Before Ladakhis could attack, Zorawar Singh attacked fiercely. Ladakhis abandoned the battlefield and retreated towards Leh. At this stage, Tsepal offered to negotiate.

After completing the arduous task of annexing Ladakh, Zorawar Singh turned his attention towards Baltistan. He organized a Ladakhi force to attack Baltistan. Skardu was captured without much fight. Mohd Shah, son of Baltistan Chief was appointed its Sultan. Zorawar Singh was not the type of person who would be easily contended with these conquests. He undertook his last and final campaign against Tibet which turned out to be fatal for him and disastrous for the Dogra expansion plan.

In a century bereft of historical achievements in Indian history, Maharaja Gulab Singh and Gen Zorawar Singh stand out as great personalities of military eminence. Jammu and Kashmir is their monumental achievement.