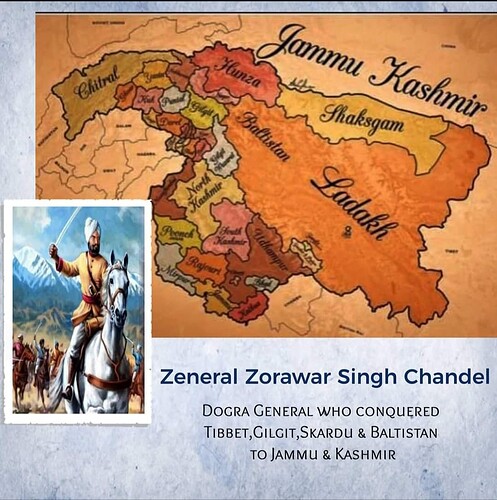 In reference to his legacy of conquests in the Himalaya Mountains including Ladakh, Tibet, Baltistan and Iskardu as General and Wazir, Zorowar Singh has been referred to as the “Napoleon of India”, and “Conqueror of Ladakh”. Reason why we still have a claim on Aksai Chin & POJK.

It’s really so weird, that first our history is wiped and then if it comes to light, it’s being tried to shift this from our possession. General Zorawar Singh Kalhuria, a Hindu Chandel Rajput from Bilaspur (Himachal Pradesh). Zeneral Zorawar Singh Chandel Whose ancestors the Chandel Rajputs of Jejakabhukti once repulsed the inavsion of Muhammad of Ghor & built the world famous Khajuraho temple in MP. Zorawar Singh Chandel (1784–12 December 1841) was a military general of Dogra Rajput ruler Gulab Singh Jamwal of Jammu & Kashmir.

The Great Dogra General Zorawar Singh was an intense Shiv Bhakt who even had named his special force as Shivji Fateh that still continues to be the name of 4th Jammu and Kashmir Rifles (JAKRif- formerly J&K State Forces). He dreamt of freeing the Kailash-Mansarovar, the holy land of his God from clutches of unholy ones & then annexing it into country of Dogras which he made possible after defeating Ladakhi franchisee of Chinese then gradually, Zorawar Singh conquered Tibet and Mansarovar, then worshipped Bhagavān Mahadev by installing a Shiv Linga there.

The conqueror of forts, Tibetans, Baltees and Qing Empire, the General of Dogra kingdom - Skardu town was situated at 2,270 metres above the sea. Aurangzeb once tried to occupy fort but failed. General Zorawar Singh occupied this insurmountable fort and annex areas of Baltistan.

"Far, oriental though, he was, we cannot help admiring a greatness in this man by which he by far surpassed his surroundings. Chinese standard “Flying Tiger” was captured by Dogra force by defeating combined army of China and Tibet in 1841.

After conquering Tibet he moved to mainland China but due to lack of supply, unprecedented weather, he met same fate as Napoleon. His soldiers starved, fell ill. Then came ruthless gigantic mainstream Chinese Army. But the Dogras were ferocious- Shaivite armies have always been. With the of acclamation of Shiv-Shakti they fought against their enemies.Even when highly outnumbered, the Dogras inflicted unimaginable casualties against the Chinese. When out of ammo, even hand to hand combat followed. Present 4 Jammu & Kashmir Rifles is the same Fateh Shibji paltan of the Dogras which defeated the Tibetan Chinese forces in this battle.

But one fateful day General Zorawar was hit by a bullet at his right shoulder and came down of his horse and started fighting with his left hand using his sword. A severe lancer ambush was directed on him and due to a serious lance strike he was martyred on the spot. On the death of their commander, his troops were thrown in disorder.They fled helter-skelter. Hence the saga of military adventures of ‘Napoleon of the East’ ended on the 12th December 1841. Next day the Dogra soldiers avenged the death of their commander by executing the enemy commander.Basti Ram Mehta, the first Commanding Officer of Shivji Fateh, the unit he led in action in Tibet, took over the command. If General Zorawar Singh hadn’t done what he did, Ladakh would have been in China and Chinese would have been lurching around Kishtwar. Chinese realized it will be pure suicide to attack the Dogra Land- because if Dogras can damage this much in hostile territory, what they can do in their own land is a pure nightmare. Chinese never dared to lead any military expedition into country ruled of Dogras. The Rajputs of Jammu and Himachal had traditionally been excellent mountain fighters.

Zorawar Singh Chandel - The Liberator of Kailash. He proved himself a true soldier in the endurances of the extraordinary hardships and in setting an example of personal courage. General Zorawar Singh died on 12th December, 1841 A.D. in the battle of ToYo. Lands from Aksai Chin and Kailash-Manasarovar to Gilgit Baltistan and Jammu are marked with the blood, valor and sacrifice of Maharaja Gulab Singh Ji, General Zorawar Singh and thousands of brave Dogra sons of the soil. Truly the Bravest of the Brave.