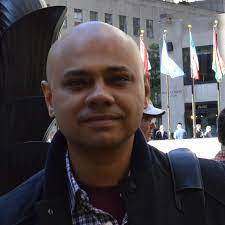 On 20th May 2015, Girish Shahane, an Art critic by profession and English Lit. graduate by education, published “What our textbooks don’t tell us: Why the Rajputs failed miserably in the battle for centuries” on Scroll.in.

Was the article even factual? Did it even corroborate the derogatory remarks it used for the Rajput public and its historical heroes? No.

He quotes the second Battle of Tarrain, Battle of Khanwa and the Haldighati Battle to concoct & foist a conclusion that Rajputs were “defeat-specialists”. He skipped any mention of the Pratihar Empire, Solanki Empire, Chauhan Empire, Parmar Empire, Tomars, Chandels, Janjuas, Rashtrakut/Rathores to build a narrative. He ignored Battle of Kasahrda, 1st Battle of Tarrain, Allaudin Ghaznavid’s defeat at Vigrahraj Chauhan’s hands, Battle of Purandar, Battle of Haifa, General Zorawar Kahluria’s expeditions etc. 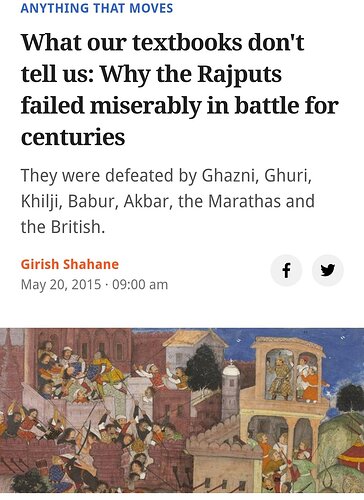 E0xA5-6UcAA8ASx1062×1457 201 KB
He would not cite any books, references or corroborate his statements like “rajputs were restricted to arid regions” – a statement that forces the students of Rajput history to question as to who are the current Rajputs of UP, Bihar, Punjab. He demeans Rajputs casually without taking introductory lessons on “who is a Rajput and what is their demography?”.

Further, he charges that Rajputs (always) used “ossified technology”, notwithstanding the fact that Rajputs of different terrains used different technologies and strategies, which evolved over the past fifteen hundred years from the time of Harshwardhan Vais to the two World Wars.

Thereby omitting the majority of Rajput military history, he concocts a narrative based on the above-mentioned three battles to imposes his brahminical prejudice on both the Rajput public and the larger audience.

To top it all, he makes derogatory and distasteful remarks against Rajput heroes. To any student of Rajput history, it was more like the rant of a juvenile.

However, the article was promoted by an array of prominent celebrities like Devdutt Pattnayak, Praveen Swami, and Sameer Bhatt - all predominantly Brahmins. Khatris & Kayasths. The Staff at Scroll also smothered any requests by Rajputs to publish their rebuttals, instead, they ensured that this casteist literature was reshared periodically.
Soon this became a public narrative on Rajput History.

Thus he published an uncorroborated article filled with demeaning casteist statements against the Rajput community and distasteful remarks against Rajput heroes. He omits discussion on mammoth Rajput history to impose his prejudices against the Kshatriya community. This is the mark of a propagandist. This illustrates his own privileged position, that Scroll.in was ready to publish his casteist diatribe without investigating or asking him to be factual. And that a huge ecosystem of Brahmin celebrities was quick to promote his vitriol on their social media handles.

He is brother of actress Renuka Shahane and brother-in-law of Ashutosh Gowariker. This explains why he is endorsed by the ecosystem which even promotes his low-quality ‘masala’ articles as intellectual masterpieces.

What also explains the success of this substandard essay with a communal motive is that it was sold under the veneer of anti-Hindutva. Thus, many Celebrity “liberals” flagrantly promoted it on social media simply because they took this ulterior ethnic-bashing as an anti-Hindutva essay.

To understand an author or a journalist’s prejudiced mind, one must explore his/her oeuvre. 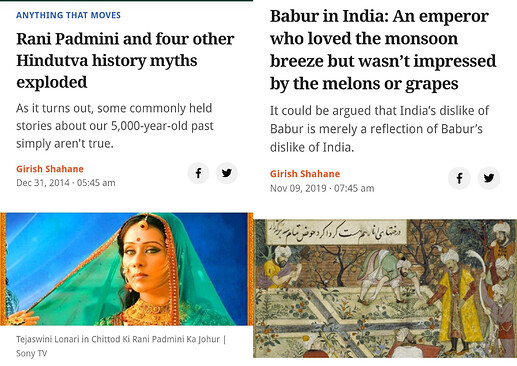 However, one must ask that why hasn’t this “left-liberal” not once smeared the Peshwas and Marathas, who are more central to the Hindutv discourse than the Kshatriyas are.

If Rajput defeats could be used to write off their innumerable victories against Arabs, Ghaznavids, Ghurids, Sultanates, Mughals, and Marathas to conclude that they were defeat-specialists, one wonders why are not the same standards applied to the Peshwa-led Maratha Empire? Why don’t defeats of Panipat, Purandar, Pilsud, Attock, fall of Jhansi imply the same for Marathi Brahmins and Marathas in Shahane’s “scholarship”?

The only reasonable explanation for this discrepancy is that Girish Shahane himself comes from an elite Marathi Brahmin family.

This partly also explains that not just why he never demeans his community but also never busts Hindutv myths on Peshwa-Maratha supremacism.

He and his group of charlatans project the Kshatriyas as the ring-leaders of Hindutv, thereby focussing the public outrage against Rajputs, they peddle propaganda against the latter. However, it is Marathi Brahmins, Shahane’s own community, that controls the Hindutv discourse and it is Maratha history, not Rajput history, that is central to the Marathi-origin Hindutva movement. Interestingly, RSS & Hindutv discourse is also controlled by Marathi Brahmins who often denigrate the Kshatriya community even there. 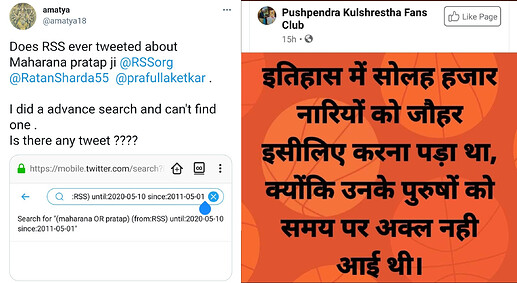 This decade countless Rightwing movies glorifying Marathas & demeaning Rajputs, some of which include high-budget blockbusters like Panipat (2019), Bajirao Mastani (2016), Tanhaji (2019) extolling Maratha-supremacy. Yet Girish Shahane & his team at Scroll.in (owned by Maratha businessman Samir Patil) ensured that even the anti-Hindutv outrage remains focussed against the Kshatriya community.

If he was truly a left-liberal just busting Hindutv myths, the first myth that he would have busted was the regular propaganda by Marathi brahmin filmmakers & pamphleteers regarding “Marathas unfurling Hindu flag at Attock” which was debunked decades back by Jadunath Sarkar. 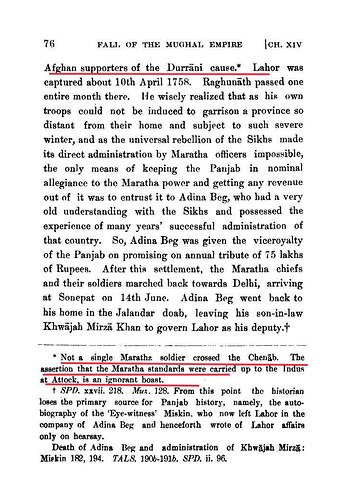 Thus while he & his team proactively demeans the Kshatriya community, despite Hindutv’s projection of Marathas as “Hindu saviours”, they never even tried busting the myth by reminding the readers that Aurangzeb had more Maratha mansabdars than Rajput mansabdars. 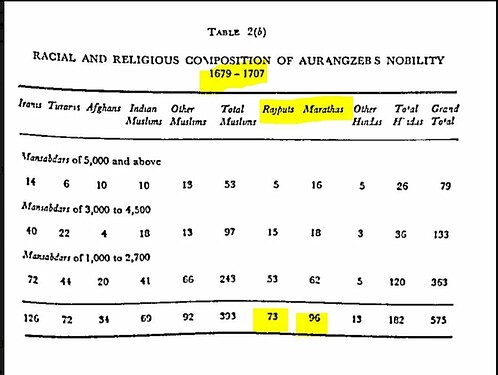 Compare his loose distasteful remarks on Rajput heroes with his nuanced defence of Shivaji. 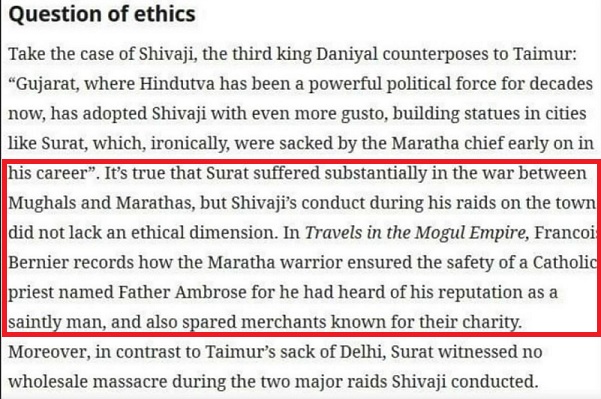 No wonder, why Girish Shahane extols Babur, the enemy of Rajputs but has issues with Audrey Truschey’s glorification of Aurangzeb, Shivaji’s enemy. Despite the fact that any history tells us that Babur (a foreigner with mostly Afghan troops) was more bigotted and inhuman than Aurangzeb (an Indian ruler with Maratha & Rajput soldiers). 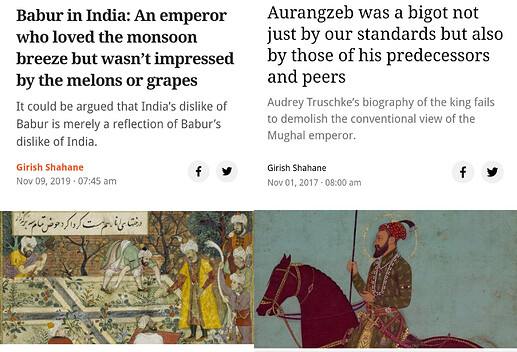 While Our Babur-loving Rajput-bashing Marathi Brahmin friend also has issues with Tipu Sultan, the enemy of Marathas, one wonders how could an Opinion-maker display his identity-based prejudices so brazenly and yet go undetected. 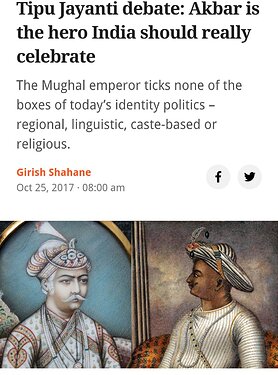 The fact that the Marathi Brahmins with clout in Big Media, Academia and Bollywood are the biggest narrative-setters in India apart from Punjabi Khatris, Bhadraloks and Ashrafs, is irrefutable.

They (Brahmin, Khatri elites) can publish uncorroborated demeaning articles on the Rajput community in Big Media & Academic journals, but a Rajput cannot publish well-corroborated neutral articles on his own community.

Hence, as a writer, I wish to ask that what is the criterion of being accepted by the ecosystem, the criterion of publishing in Big Media? What makes someone qualified to impose their prejudices as public narratives? What gives someone the right to use public platforms and institutions to denigrate other communities and spread ill towards them? Doesn’t it have to do with the right Identity-marker, despite all pretensions to egalitarianism from right to left? Is it merit or contacts that make a person a qualified intellectual