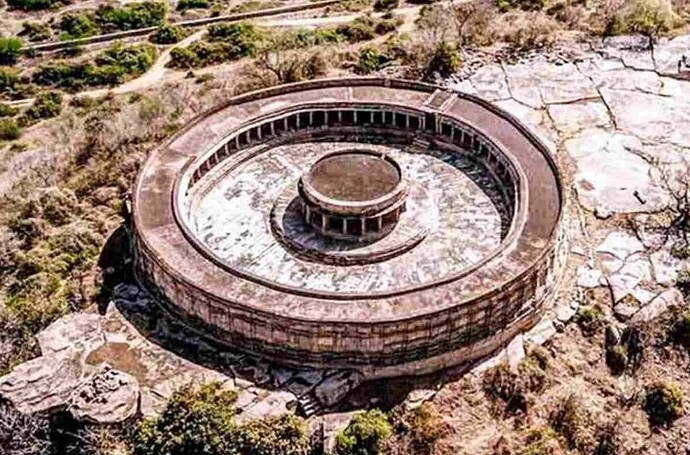 Lutyens did claim to use Indian influences. However the Indian lobby that began to be Identified with his name, destroyed much or threw much of this History into darkness. This lobby was dominated by Literary castes that were richer, more stable and now political inheritors of the British Civil society, but couldn’t stop demeaning and belittling Rajputs.

Gwalior was established by Kachwahas, who were feudals of Imperial Pratihars of Kannauj. When the Imperial Pratihar power waned, Rashtrakuts (Rathores) of Badaun conquered Kannauj forcing the Pratihars to depopulate Kannauj – Rathores are still the largest Rajput clan of Kannauj district while Pratihars are non-existent.

These Pratihars then moved to east & South ; they took Gwalior from Kachwahas and established Gwalior Parihar dynasty.
Kachwahas thus were forced to leave Gwalior (though Kachwahas are still found in Gwalior), the city they founded and invade Eastern Rajasthan where they became feudatories of the new Imperial Chauhan power. Arriving in Eastern Rajasthan, they displaced Nikumbh Rajputs from Dausa (who later moved to Rohillkhand) and establish a stalemate with the branch called Gurjar-Pratihar or Bargujars of Alwar .

Yet the Kachwahas could never rise due to their geographical proximity with Sultanate Delhi and their political vassalage under Mewar — the power that rose to prominence in 14th century.

The Mughal-Rajput alliance is a bullshit …it was Mughal-Kachwaha alliance , all the other western, pahadi & bundela Rajputs who joined also accepted the leadership of Kachwahas, who finally replaced Mewar.
Almost all of us in Rajasthan have Kachwaha & Sisodia-Guhilot relatives ---- but even the latter acknowledge the political sagacity of the Kachwaha leaders for having caused rajput revivalism after Mewar’s decline.
The same clan also gave us all the Jantar Mantars and many brave soldiers to this day.

Yet, the only thing that Lutyens gang & Marathi rightwing wants us to associate them with is — JodhaAkbar & that too they reinterpret as if to evoke shame.