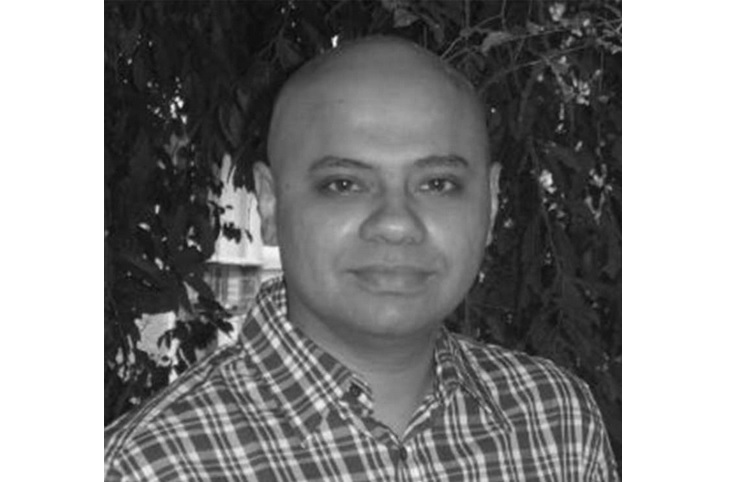 Today, society witnesses a public mobilization against Rajput people who are shamed as “defeat specialists” “losers” or “pussillanimous” — so much so that one witnesses all - Congressis, Communists & Sanghis joining the mob. Thus there is a complete alienation of Rajput community. But at the center of this hate-campaign stands an article dated 25th May 2015 by Girish Vijay Shahane , a Marathi brahmin , published on Scroll.in, — a portal owned by Samir Patil , a maratha businessman .

A Rajput dynasty was not founded by any administrative takeover by elite rich individuals like say how Ayodhya’s Mishra dynasty was founded. A Rajput King and his power depended on the Military prowess of his clan-kinsmen, who numbered atleast in hundreds or thousands then. Further, unlike Brahmins who had monopoly over religion or Banias who had monopoly over wealth, Rajputs (Kshatriyas) never had monopoly over arms. There were Huns, Turks, Turko-mongols, Afghans, Bhil kings, Gond kings , Jat and Bhumihars, with who they had to compete for millenium.

However common sense asks that how did a people who were simply “ defeat specialists ”, outdid and outlasted absolute monarchies like the Gangas, the Kakatiyas, Seunas or Vijaynagar dynasties despite being precariously situated closer to the turbulent Islamic World for nearly 1500 years of their existence.

Therefore, a fact check on this narrative is required, after which we plan to see if the Article had any other useful insight. For the sake of simplicity, we shall limit our focus to western rajputs , who are often dragged by the propagandists, in this part- however that mustn’t mislead readers about the boundaries of the Rajput ethnonym. Shahane’s diatribe not just aimed at establishing the superiority of Marathi Warlords over Rajputs but it was also aimed to write-off the entire complex ethno-military history of the Rajput community. Hence we shall make necessary comparisons when required. 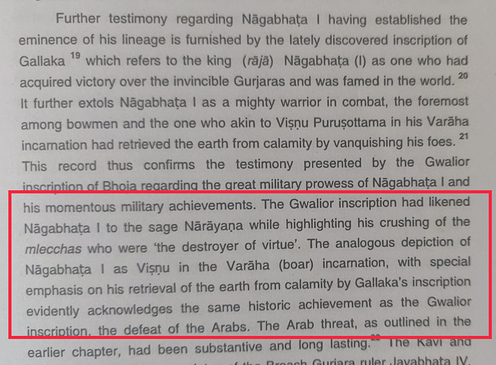 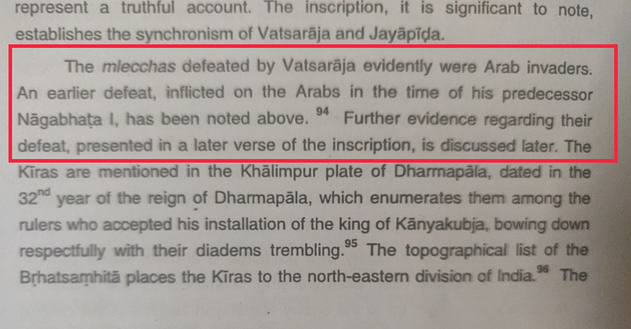 The Parihar rajput leadership was also the leadership of all Rajput clans who fought under them. Thus Parihars ( Gurjar-Pratihar is a misnomer used for them), who are addressed simply as Pratihar in Sanskrit inscriptions, became the Bullwark of North India against Arab invasions. And even though the Parihars declined socioeconomically and politically after early 11th century, they outlasted their Uppala and Lohar contemporaries. As a result, Parihars would repeatedly appear across Northern India as vassals, warlords or soldiers — Medini Rai of Chanderi was one such Parihar warlord or Belaji Parihar who was one of guardians of Rao Bikaji Rathore.

3. Defeat of Ghaznavids by Arnoraja Chauhan

The Imperial Parihar power that covered most of North India, was replaced by Imperial Chauhans in Rajasthan; Imperial Chaulukyas (Solankis) in Gujrat; Parmars in Malwa and Chandelas in Bundelkhand.

This information also highlights the role played by Johiya Rajput chiefs in victories of Imperial Chauhans — the Johiya rajputs are predominantly Muslims today and reside in Bahawalpur, Mirpur Khas and Hyderabad districts. 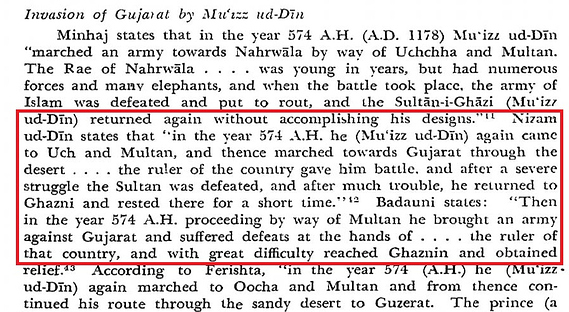 This battle was actually led by Naikidevi Chandel, who was the guardian of her son Mulraja Solanki II. Often some have wrongly linked her to Goan Kadamba dynasty, but it is untrue.

Prithviraj III was 25 years old when he defeated the vast Turkic Ghurid army and made the 42 year old Muizzuddin Muhammad Ghori to flee. Yet Shahane dismisses him as “defeat specialist” citing his defeat in the Second-Tarain battle. But at the same time the Marathi brahmin refrains from extending the courtesy to Shivaji (for his defeat at Purandar), Peshwas for defeat at the 3rd battle of Panipat or Hemu Bhardwaj’s defeat at the 2nd battle of Panipat.

Bhartu was an a Chauhan Rajput from Chandwar and a former samant under Gahadavala/Gaharwar Rajputs of Benaras. He annihilated Shah Juran Ghori’s 1,20,000 Turks ( numbers exaggerated ) as per Tabaqat-i-Nasiri which then hails Turkic Malik Nusruddin for defeating the latter after 3 decades.

The Nagaur Sultanate was an offshoot of Gujarat Sultanate , whom Mirat-i-Sikandri gives a Tak Rajput origin. Since Rajputs don’t lose their clan-identity due to conversions. The Gujrat Sultanate were Nagvanshi Tak rajputs — the clan to which founding of Nagaur in the 5th century is attributed. Today almost all Tak rajputs are Muslims and among Hindus Tak is a Mali surname. Kumbha who revived Mewar as a regional hegemonic state and filled the void of Imperial power in the region, was responsible for destroying the Sultanate while its territories were taken over by Marwar’s Rathores, who were descendants of Hathundiya Rashtrakuts.

At this juncture, it is worth inquiring the situation of Marathi Brahmin & Patil warlords?

9. Defeat of Mahmud Khalji II by Guhilot Sanga Sisodia at Battle of Gagron (1519)

12. Rout of Mughals led by Shah Mansour Barlas at hands of Guhilot Sanga Sisodia at Battle of Bayana (1526) 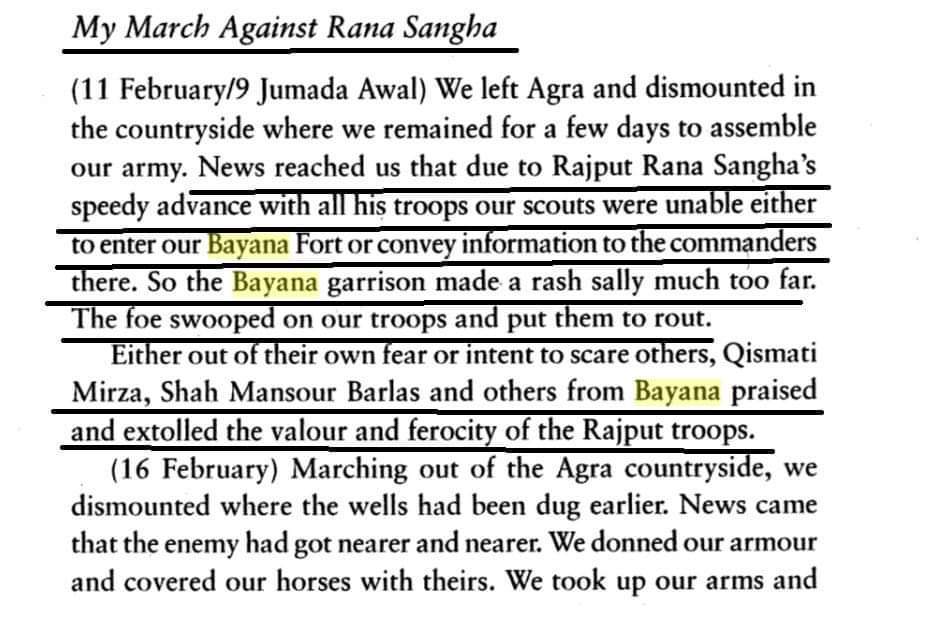 The “loser” “defeat specialist” Sanga who is today remembered only for his defeat at Khanwa (1527) and for allegedly inviting Babur (a dubious claim) , thanks to the modern-day identity-politics of writers like Girish Shahane who pass of their sophistry as defense of secularism.

Guhilot Sanga Sisodia was no Emperor unlike the Imperial Parihars or the Imperial Chauhans but it is his military career that helped him earn the respect of both local Rajput States and the local Afghans who fought under him, first at Bayana and then at Khanwa.

At this juncture, one needs to ask that if Rajputs were simply “defeat-specialists” what were other “more-illustrious” Hindu Kings of the Deccan and the South upto? What were Deccani Brahmin & Patil warlords upto?

13. Battle of Kaithal (1529) - defeat of Mughal general Ali Kuli Hamdani by Mohan Singh Madhadh and his band of Madhadh Pratihars

Source: Ahsan Raza Khan; Chieftains in the Mughal Empire During the Reign of Akbar, p. 145 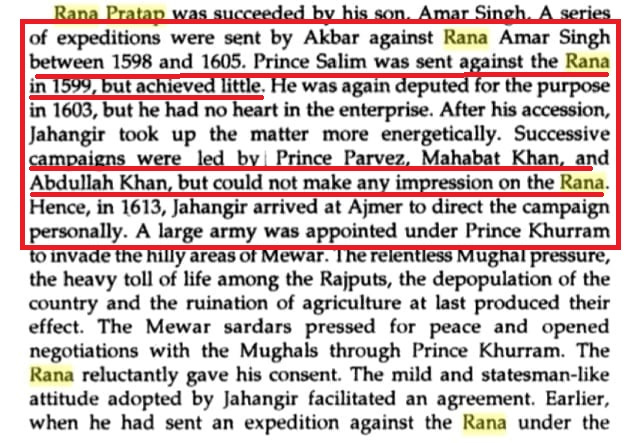 When Rajnath Singh (Raikwar) , the then Union Minister, made a populist speech suggesting Pratap was as great as Akbar it allegedly ruffled many weathers among Nehruvian intellectuals since Akbar is construed as central to embodiment of Indian Nationalism. This started the “left-liberal” communal gossip targeting the community wherein D N Jha and others gave an impression that Amarsingh Sisodia had surrendered immediately after Pratap’s demise. However, pages from their own senior Satishchandra tell otherwise. Guhilot Amarsingh Sisodia ,who was a distinguished battle-commander under his predecessor, led Mewar as a sovereign for close to two decades and repulsed several expeditions by Imperialist forces.

However it must be noted, that the defeat of Brahmin Peshwas or Shivaji’s maafinamas to Aurangzeb wouldn’t have been invoked by Shahane to dismiss them as “defeat specialists”. It is the only the community of Parihars, Chandels , Parmars, Chauhans , Solankis, Chawdas, Vaishs , Bhattis, Guhilots, Kalachuris i.e. Rajputs that gets labeled as such. Shahane only made use of the anti-Rajput feeling among Nehruvian savarns to push his own agenda.

Just as the “leftist” Brahmin targets Sanga or Pratap to dismiss the Rajput community as “defeat specialist”; the “rightwing” brahmin targets Mansinghji and blames the Rajputs of betraying “Hindus or the Nation”. This makes modern rajputs hostage to interpretations of his past, based on contemporary politics of different lobbies,both led by brahmins.

While Mansingh was mostly involved in battles against Afghans whether in Afghanistan or Bengal for the Imperial Timurid; public discussion skips the similar role played by Shahaji Bhosle against Kempegowdas of Bangalore and Nayaks of Thanjavur in service of Bijapur Sultanate. However we wouldn’t dismiss Shivaji as “defeat specialist” for a mere defeat since only a person with no pedigree of valour or chivalry, makes such armchair labels. He was a fine soldier as praised even by his Rajput adversaries. We leave such appelations to the Marathi brahmin lobby and the Nehruvian intellectuals because we realize that resources, manpower, and geography play as much an important role in a battle as much as valour and leadership.

The Jodhpur Lancers were an All-Rajput cavalry , with 3 units of HIndu Rathores and 1 unit of Kayamkhanis — a caste of Muslim Rajputs.

18 Defeat of Turkic Governor of Sambhal by Nalu Kathait (a Katoch), a Kumaoni general (1412) 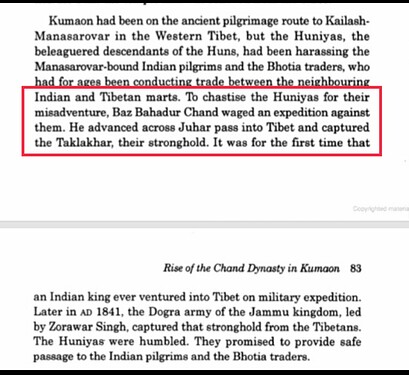 21. Lastly, Battle of Haldighati that caused tussle between Muslimphobic Right and Rajputphobic-Left, both of which are controlled by same groups.

It must be noted that here we have restricted discussion only to Rajasthan and it’s surrounding regions and 3 instances from Uttarakhand - and have avoided discussing Rajputs of Himalayas, Punjab, Gangetic Plains and Central India. Furthermore, we never claimed that Rajputs didn’t see defeats. Those who fought over a period of 1500 years, surely saw both.

Therefore, the Rajputs were indispensable to the military History of India from the days of Emperor Harshwardhan (595–647 CE) , when the Vaish rajputs and Chawda rajputs first established themselves respectively in Gangetic plains and in western India to the early battles of modern Indian Army, where Rajputs earned 5 PVCs and 29 MVCs . And who can forget Lt Gen Hanut Singh (MVC) and Lt Sagat Singh (PVSM) for their service to the modern Nation. Similar achievements have been attained by Muslim Rajputs in Pakistan, who bagged 6 Nishan-e-Haiders in an Army where top-brass is predominantly Pathans and Syeds.

No wonder why Scroll.in, which is owned by a maratha businessman Samir Patil, ran Girish Shahane’s story almost monthly for five years to set it as a public narrative on Rajput people— displaying caste-hatred too openly for a “mainstream-media portal”. 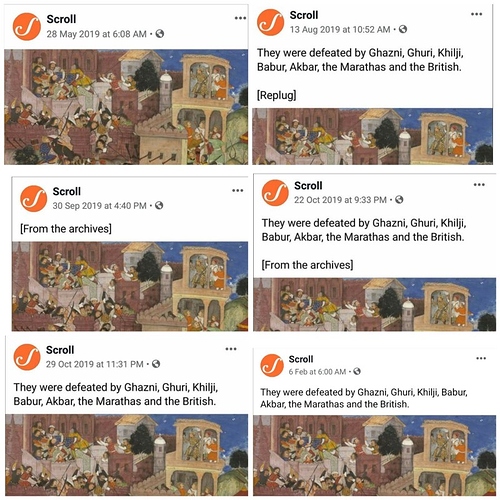 This picure only takes into account(May 2019 to Feb 2020). Even if one agrees to their narrative , Such Obsession to smear an ethnic group , only highlights rampant corruption and brazen caste-politics in “Mainstream media”

Isn’t it a satire on lobbies working under the aegis of “liberal” “intellectual” circles that a man who is very squeamish about any public disrespect towards Brahmin and Maratha heroes like Hemu and Shivaji respectively, not just derisively mocks Rajput figures but publically smears the entire community with a label. Yet he can do that, because he hails from a Celebrity background. 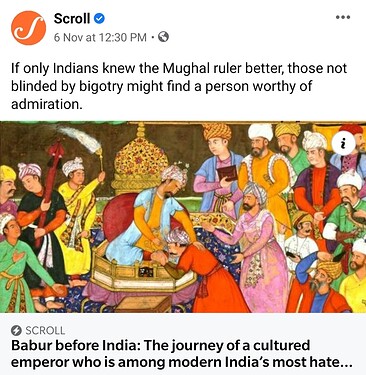 Screenshot_20201121-212933__011080×1105 325 KB
This was also written by marathi-brahmin Shahane and published by maratha businessman Samir Patil’s Scroll.in. They are allgedly worried about bigotry against a 16th century Turkomongol warlord, after peddling bigotry against and writing-off history of 5 crore Rajputs

Some (incl. celebrities from Brahmin, Khatri or Jat bckgds) even adamantly argue that since Rajpust didn’t have any Imperial presence throughout their past, they were defeat specialists. Well, who enjoyed Imperial powers throughout their history? Even the mighty Mongols didnt. Did the Sikhs, Jats or Marathas? Understand the underneath Caste-politics.

Hence I implore Rajput boys and girls, men and women to stop being apologetic for flimsy narratives as such and stop being hostage to warped projections of our past by such people whose own forebearers lived by sophistry.
Instead understand that these are less attacks on the Rajput past but more on the social, economic and political present of the Rajput people. Instead counter-question them on their past. Thus study, educate, organize and rebel for your rights and those of your people.

After having weighed the bazaar gossip, let us carefully read and evaluate Mr Shahane’s article if at all, it has any other scholarly value in the second article of this series.

Can you help me know more about it. Kathaits are Kumaoni subclan of Katoch rajputs.

Can you help me know more about it. Kathaits are Kumaoni subclan of Katoch rajputs .

What happened was the governor of Sambhal (in the DELHI sultanate) captured the plains territories of the Kumaon king. The Kumaon king (Gyan Chand) dispatched a force under Nilu Kathait to drive them away. Nilu succeeded and achieved a complete victory in open battle. The king ordered an inscription in his village to commemorate this victory against the Mlecchas

Sounds informative. Can you help me with the reference & the inscription.

From The Himalayan Gazeeter Vol 2 Part 2 : 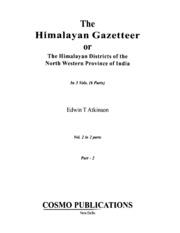