The modern Indian states of Gujarat and Rajasthan have shared geography. Arid lands in the west, rugged hills in the center, and more fertile lands to the south and east. Western Rajasthan had a shared history with Northern Gujarat until the 14th century, when the Hindu kingdoms in Marwar, Mewar, Hadoti, and Dhundhar, formed a vast geo-cultural union by virtue of expelling the Turkic invaders of the Delhi Sultanate from each of these regions. The Kanhad Dev Prabandh, a historic poem from the 15th century records the battles of Kanhad Dev, the Chauhan ruler of Jalore against Allauddin Khalji, the Sultan of Delhi in the early 14th century.

The author of the Kanhad Dev Prabandh was Padmanabh, a Nagar Brahman of Gujarat, while his royal patron was Akhairaj, the Songira Chauhan ruler of Sirohi in Southern Rajasthan. Akhairaj was also a lineal kinsman of Kanhad Dev and among his own military exploits was defeating and expelling the Muslim governor of Jalore. This ruler Akhairaj Chauhan also happens to be the maternal grandfather of Maharana Pratap of Mewar. In writing the history of Kanhad Dev, Padmanabh alludes to his latter-day kinsman Akhairaj and finds parallels in their military exploits. The poem was composed in the 16th century when Jalore was liberated by Akhairaj…on this occasion the Rajput king’s opponent was an agent of the Sultan of Gujarat.

The period from the setting of the historic poem down to the time of its author’s own life saw tumultuous changes in the politico-military situation in Western India. Beginning with the slow and bloody Turk conquest of the numerous forts in the region, going on to the dogged guerrilla warfare of the Rajput clans against the invaders, and ending with their establishment of powerful Hindu kingdoms in that same region. 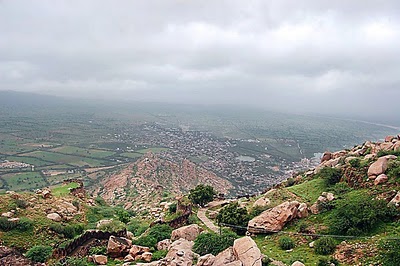 View of the Jalore Fort and the city beneath; the arid plains and stony Swarnagiri hill (modern Songiri) are magically transformed in the monsoon season (photo from Jai Jalore). The Chauhans who ruled Jalore acquired the eponym Songira from this hill, on which the fort was built.

From a plethora of literary and epigraph sources, historians have counted three clashes between Alauddin Khalji and Kanhad Dev. Padmanabh describes all three but pays special attention to the 1298 invasion of Gujarat by the Turks coming through Marwar and bypassing Jalor. The invaders committed great atrocities on civilians, breaking temples and carrying a large number of prisoners and broken Hindu icons (the most famous of which was the lingam of Somnath) back to Delhi with them. In Padmanabh’s words, “Some of the captives were sick, some unable to sit up. Some had no shoes to put on and no clothes to wear. Some had iron shackles on their feet. Separated from each other, they were huddled together and tied with straps of the hide. Children were separated from their parents, the wives from their husbands, thrown apart by this cruel raid. Young and old were seen writhing in agony, as loud wailings arose from that part of the camp where they were all huddled up. Weeping and wailing, they were hoping that some miracle might save them even now.”

The miracle did appear, in the form of Kanhad Dev of Jalor and his army which defeated the Turks and rescued the prisoners. Some of the military details given by Padmanabh are interesting. Like a night attack by Kanhad Dev’s Rajput soldiers on the Turk camp. Or the description of Rajput warriors, the weapons they wielded and the armor they bore. Interestingly the Sultan of Delhi is also called Asvapati (lord of horses) because the Turks had access to vast numbers of horses bought straight from their breeding grounds in Central Asia, Afghanistan, and West Asia.

The Kanhad Dev Prabandh also relates the siege of Jalore and the final tactic of Jauhar, which denies the invaders any prisoners or goods of value, even as the fort falls. Another interesting episode is the love affair between Kanhad Dev’s son Viram Dev and Alauddin’s daughter Firoza.

The language in which the Kanhad Dev Prabandh is written was descended from Western or Nagar Apabhramsa, spoken in both Marwar and Gujarat (the two regions were known in ancient times as Maru and Gurjara respectively). This language is called “old Western Rajasthani” by Rajasthani linguists, and “old Gujarati” by Gujarati linguists. After this poem was written, these two languages, Gujarati and Western Rajasthani (Marwari), began to acquire divergent characteristics and became separate languages.

Both languages claim this heroic poem as part of their exclusive literary heritage. In the same way Rajasthani, Gujarati, and Hindi lay claim to the bhajans of Mira Bai written in the 16th century. The Rajput princess Mira who was born and lived in Rajasthan composed her bhajans in her native Marwari, but their language has been altered to approximate with Hindi in the east, and with Gujarati in the south.