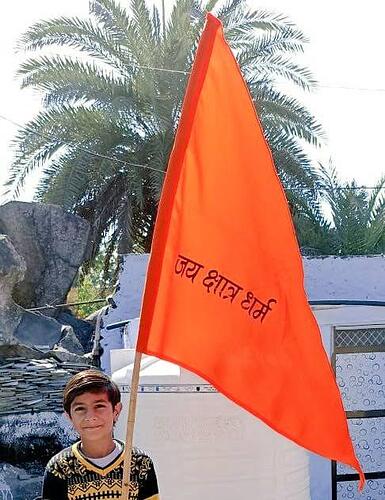 IMG-20220422-WA0023486×631 59.4 KB
The very basic mistake regarding religion which most Kshatriyas make today owes its origin to the mistaken understanding of what Kshatriya Dharma is. They believe that Kshatra dharma simply means that Kshatriyas are duty bound to protect Hindu religion (Sanatan as we usually call it, which it is not, and never was) and particularly the cow and the Brahmins. We take pride in the expression : “Gau-brahman pratipalak”.

This false understanding has caused a great deal of confusion among our ranks : the ordinary Rajput’s self -conception has become more and more chaotic and confused, so much so that he is prepared to identify with everything that is presented before him in the name of Hinduism or Hindutva; and this confused understanding has certainly distorted our own view of our real history and contribution to this civilisation.

We cannot take a narrow view of dharma because that is inconsistent with the stand our great ancestors took on the subject. We have been patrons and protectors of not just the Hindu faith and Brahmins - Banias, but also Buddhists and Jains. In Fact, the very founders of these faiths have been Rajputs. Not to mention countless lesser known cults that we founded and patronized. Our idea of Kshatra dharma must be vast and founded in the universal ideas of dharma and not in narrow sectarian outlook, and this rehashed understanding should serve as an ideological foundation to unify kshatriyas across the subcontinent cutting across narrow defiles of religion and region.

In the Hindu dharm the fundamental role of the kshatriyas has been to defend the society from both internal and external enemies in the time of war and otherwise to maintain the social order eulogised in the Dharmasastras in great length. The kshatriyas basically have the executive powers and it is enjoined upon them to maintain the social order in its pristine form and detail as described in various dharma sastras. And should they fail to do that they would incur great sin as a consequence of which their power and prestige would be lost. For this reason, we often find Rajputra heroes such as Shri Ram going to extreme lengths to uphold the order of the Dharmasastra. The controversial Shambukha episode that appears in the Uttarakanda of the epic Ramayana is a case in point. A point that must not be lost on us is that, these dharmasastras appeared much later in the evolution of Hindu religion, and it therefore stands to reason that the heroes of Ramayana and Mahabharta must have conducted themselves in differently in religious matters than the picture which the received recensions of the epics paint before us. What Epics basically do is a post facto imposition of certain ethical and social attitudes on Rajput heroes, a fact which can be easily borne out, when it is realized that these Dharamasastra hadn’t come into existence in the form they are available today and were not in practice at least among the vast majority of the population even during the Buddhist period, let alone in the remote antiquity of Ramayana and Mahabharata.

The truth must be told. The modeling of Kshatriyas as the upholders of the dharma described in the Dharmasastras is a fairly idealized and labored description which distorts the actual role historically played by Rajputs in the sphere of Dharma. Historically speaking, Rajputs have never been a sectarian people, and the history bears that out in bold outline. Rajputs were the founders of the so-called heterodox religious ideologies in the sub-continent, which summarily rejected most Brahminical ideas, if not all. What’s more, till very recent times, the Rajputs have patronized the Jainas in Gujarat and Rajasthan, not to mention the role played historically by Rajput patrons such as Samrat Ashoka, Samrat Harsha, and Samrat Jayachandra, just to mention a few popular names, in the journey of non-brahmanical religions in the subcontinent.

Therefore, it would be safe to conclude that the Rajput approach and conception of Dharma has been essentially nonsectarian and it wouldn’t be an exaggeration to say that we have always upheld universal humanitarian notions in our understanding of Dharma as a principle.

An essential metaphysics of the Kshatra Dharma

The Brahmin Dharmasastras understand Dharma in a narrow sectarian terms within a heavily deontological context. That is, it begins and ends with an exposition of duties and obligations that Rajputs must adhere to. The spread of this conception is only horizontal. Rajputs have traditionally had a very different understanding of Kshata Dharma. Our conception of dharma is oriented more towards virtue ethics than deontological ethics. Having said that, our dharma has both horizontal and vertical dimensions. The duties and obligations are merely the preliminary preparations for the higher calling, and this deontological component of dharma is superseded by the progressive self-culture of individual sadhna that actuates the fullest potential of a human being and turns a mere man into a superman. This spiritual culture oriented around virtue ethics has produced great men such as Janaka, Vishawamitra, and the tirthankaras of the Jainas, the Buddha and countless others. In the modern times, Gen. Hanut Singh is perhaps the best example of how a Kshatriya must live his life according to kshatriya dharma. We have drawn the basic outline of the metaphysics of Kshatra dharma situating it in the larger context of historical evolution through ages in this article. We will develop the full metaphysics in the next few follow up articles.

I agree that the Rajput dharam is non secterian and we should work to unite the society and not divide it. But in fact, we see that deep and demeaning Varna classification is so deep rooted in the society in general and in Rajputs and Brahmins, that it divides the society. We should profess that humanity and humanism is theRajput dharma. Acceptance of ‘Bhilani ke ber’ in Ramayan by Ram is a pointer to it.
Secondly, we should not shirk our executive and administrative responsibilities and join the political dispensions and administrative services. We should work to prepare our youth towards it.
We will thus be moving from the realm metaphysical word to physical world. This is the call of the hour for our community.