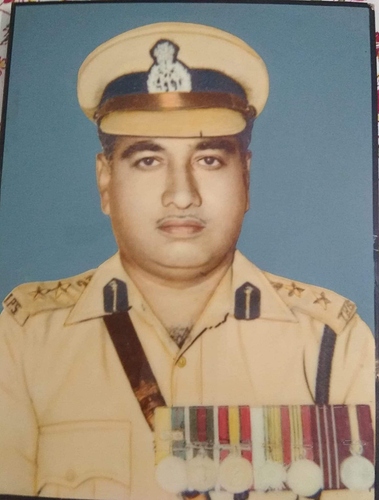 Born in a humble Rajput family of village Loharki in former Jaiselmer State in 1920. He did his Metric from Chopasni School in 1941. He was selected to do Police Sub Inspector training in Moradabad which he completed in 1943. He then served as Hakim in Jaiselmer State till 1950. While serving as Hakim he was commended by Jodhpur State and Sindh Police for eliminating 2 Hurs of Rahim Hingora gang who were wanted by these Police Forces. He was also commended by Bikaner state government for chasing and arresting 6 dacoits wanted by Bikaner state. He was part of the raid party that chased over 500 Pathans back into Pakistan who had looted some villages near Sultana during the time of Independence.

After joining Rajasthan Police he spent nearly 14 years in Anti Dacoity Force in Bikaner, Barmer, Jalore, Pali and Sirohi. In 1961 he was awarded the President’s Police and Fire Service for Gallantry for eliminating the notorious dacoit Dhunk Singh and his gang in the foothills of Mt.Abu. This dacoit was wanted by both Gujarat and Rajasthan Police. He was awarded Bar to Presidents Police Medal for Gallantry in 1967 for eliminating the dacoit Kishen Singh Bhati and gang in Barmer. These dacoits were responsible for having killed a Sub Inspector and two constables a few days before they were eliminated. Lakh Singh Bhati is amongst very few officers in India to have been given Bar to Presidents Police Medal for Gallantry. He has also been awarded the Presidents Police Medal for Meritorious Service.

In his service with Rajasthan Police, he was responsible for the surrender of famous dacoit Balwant Singh Bakhasar and 19 dacoits of the Bhati gang of Jaiselmer. He was responsible for eliminating many lesser dacoit gangs including Kaniya Valiya in Jalore.
During the 1965 war, he was attached to Maj. General NC Rawley, Commander 11 th Div responsible for operations in Barmer area. He was commended by the General for his role during the war on the basis of which he was promoted to the IPS.

He served as SP from 1968 to 1979 in many Districts of Rajasthan before retiring as Senior SP.
It was a commendable journey from an ordinary Rajput family of Jaiselmer to rise from a Sub Inspector to Senior SP on dint of merit. He along with Shri Guman Singhji Bhati DIG and Shri Narayan Singh Bhati SP were the three Police Officers from the former Jaiselmer State to have played a major role in eliminating the infamous Dacoit gangs of Rajasthan in the fifties and sixties.