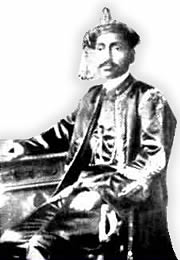 Udai Pratap College, Varanasi was founded in the year 1909 as a High School.It owes its existence to the philanthropy and benevolence of Late Rajarshi Udai Pratap Singh JuDeo, Raja of Bhinaga (District -Baharaich, u.P.). Though born a Raja he became a Sanyasi (recluse) for the welfare of the society. He was born on September 03, 1850 and passed away in 1913. The intervening period of 63 years was a period of political and cultural upheaval in the history of our country. In 1857, the fist war of independence was fought against the British rule. Although the ripple did not last long, because it was crushed brutally by the empire, but it fired the imagination of people of our country for securing freedom from the foreign yoke. People felt that open revolt against technically highly advanced British Empire may prove futile. Politically and socially conscious thinkers of our country thought to take some cue from Britishers themselves. They felt the necessity of instilling the sense of dignity among the youth of the country for glorious past, but at the same time, the inclusion of progressive elements from the European culture was also thought inevitable. The formative period of Rajarshi’s life was spent in such an environment.

As wise men think alike, in line with the thinking of Sir Sayed Ahamad Khan and Mahamana Pandit Mahan Mohan Malviya , Rajarshi felt the necessity of having an educational system where boys and girls develop a scientific and rational approach and at the same time may have deep sense of honor and dignity for their culture. With this in mind, he founded Hewett Kshatriya High School in Varanasi which has grown into Udai Pratap Autonomous College, Varanasi.

On the occasion of laying the Foundation Stone of Hewett Kshatriyo High School on the 25th November, 1909, Rajarshi sent a massage to be read at the time which sums up his philosophy about education and can be of much use to the mankind in the present environment of terror and violence.

“…Knowledge was given to man to bless and not to harass mankind. The education that does not further the ends of Universal peace and progress is not deserving of the name. …'we must not efface from our minds the fact thqt we are not only born in the land of Rama and Buddha but that we also lay claim to the same blood flowing in our veins; the one most cheerfully renounced his crown and his kingdom in obedience to his fother and his king; while the other did the same in order to preach universal love and peace…”

Rajarshi had held several honourable posts in the government. He was advisor to Education Commission. He was made member of Union Public Service Commission in the year 1886.In acknowledgement and recognition to his erudition, he was chosen fellow of Allahabad and Calcutta Universities. He was a social and political thinker and expressed his views about several matters like democracy etc. He regularly contributed articles on various social, academic and political issues in a famous British paper "Nineteenth Century." He has written a number of books and several articles and had a rare command of the English language.

Apart from establishing this college, he established quite a few other institutions and gave financial contributions to several institutions. He established an orphans’ home, Bhinga Raj Anathalaya at Kamachchha in Varanasi and also created a permanent fund by donating it Rs. 1,23,000/- to meet the recurring expenses. He donated thousands and lacs of rupees to several social organizations, to name a few- KG Medical College, Luclanow; Moolghandh Kuti Vihar,Sarnath; Calvin Taluqedar College , Lucknow; Hindi Pracharini Sabha,etc. He also created several permanent funds for providing scholarships to students from the interest earned. He will be long remembered for his nobled deeds.