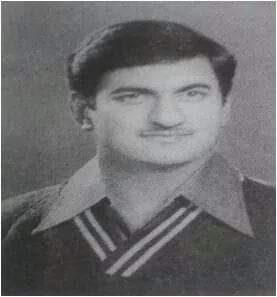 Maj Dhirendra Nath Singh, Veer Chakra of 3 Kumaon is a Kaushik Rajput and both his sons are serving Brigadiers

Loss of limb in the battlefield in the Indo-Pak war of 1965 at the prime of his youth could not affect his will to live and set example for others. For the past half century, Major Dhirendra Nath Singh witnessed various developments on domestic and global fronts—walking on an artificial limb. The Vir Chakra awardee, now 74-year-old, who lives in a double-storey apartment in Lucknow’s Aliganj, has successfully overpowered his disability and inspired his sons and grandson to join the Army.

On September 18, 1965 , Major Singh was commanding a company of a battalion of Kumaon Regiment which was ordered to capture Keri. The assaulting platoons ran into the enemy minefield and there were many casualties. Major Singh moved in front with his men to attack the enemy and lost a leg. He was lying wounded in the mine-field, when he saw an enemy medium machine gun firing nearby and he crawled up with an LMG from one of his men and fired at the enemy MMG to silenced it. Under his able leadership, the post was captured by his men after fierce hand fighting.

While Major DN Singh left the Army in 1971, he ensured that successive generations of his family join the armed forces and embrace the olive green uniform. Two of sons – Brigadier VPS Kaushik and Brigadier SP Singh are posted at Kargil and Kupwara respectively, while his grandson Digvijay Singh is a gentleman cadet and is undergoing training at College of Military Engineering, Pune. One of his sons is currently commanding a brigade, which had captured Hajipir on August 28, 1965, while another is commanding the brigade, which had captured point 13620 in May 1965.