Marwar and the Uprising of 1857

During this crisis Takhat Singh stood firmly by the paramount power.The Jodhpur State troops were summoned to Ajmer for the protection of the arsenal stationed there. They were sent under Walter to chase mutineers from Nasirabad. They also traversed Jaipur territory in pursuit of Neemuch mutineers.

This pro-British involvement of the Maharaja gave a good opportunity to the refractory nobles among whom the wave of dissatisfaction against the British was more widespread than against the Maharaja.

When the Jodhpur Legion rose in arms at Erinpura in August 1857,the Thakur of Auwa admitted its men into his fort and offered them service. The Thakurs of Asop, Goolar, Alaniawas, and Bajuwas went to Auwa with their men and might. Takhat Singh sent a contingent with a British officer against the rebels. The Raj troops were routed on September 8 at Bithoora 5 km. away from Auwa.

Their guns and military stores were captured by the rebels. A few days later Lawrence, A.G.G, himself marched against Auwa. He drove the enemy into the fort While the action was in full swing, the Political Agent, Monck Mason, arrived at Auwa with a few men. In the fierce engagement, he was killed. His body was hung upon a tree opposite the gateway of Auwa. In October 1857, the rebellious legion marched towards Delhi. While the Thakurs of Alaniawas and Goolar accompanied it to Narnol, the Thakur of Asop returned to defend his own jagir.

A contingent of British troops numbering 1500 from Deesa (Palanpur) and Nasirabad attacked Auwa on January 20, 1858. The Raj army with the thakurs of Nimbaj and Ras joined it. The Thakur of Auwa escaped to Mewar on March 23, but his men led by the Thakur of Lambia offered desperate resistance. On March 29, the guards were bribed and the fort was occupied by the British troops.

They plundered the town mercilessly and brought about complete destruction of the fort and the palace. The entire jagir of Auwa was confiscated by the Maharaja. Meanwhile, the fiefs of Asop, Goolar, Alaniawas-and Bajuwas were also seized. The capture of Auwa by the British troops and the suppression of the Rising enabled Takhat Singh to inflict heavy punishments on the refractory nobles.

The Thakur of Asop was interned in the fort of Jodhpur and the other rebel Thakurs were declared outlaws. Their allies were also severely dealt with. Defeated and
crushed, the martyrs, who laid down their lives, did not, however, die in vain. The first consequence of the uprising was the assumption of the Government of India by the British Crown. The Queen’s Proclamation of November 1, 1858, assured the rulers their territories, rights, and dignity. 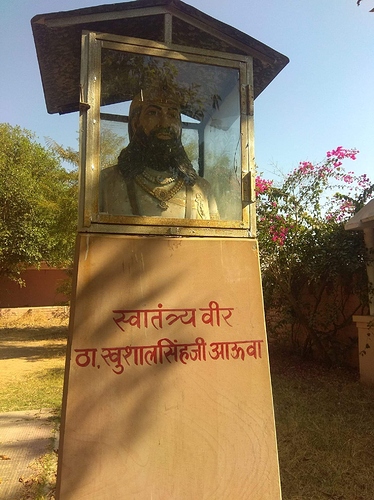