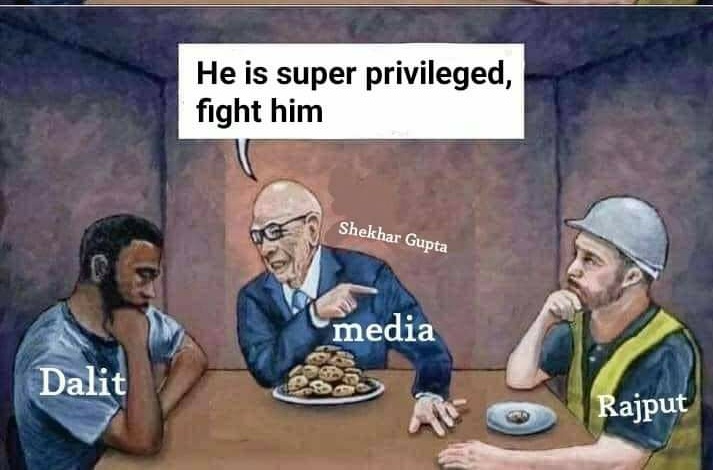 Rajputs are the Only community that gets accused of Hegemony, even in the face of underrepresentation in media, academia, cinema, government jobs and consequent voicelessness. Ironically, those who accused the community of “Thakurvad”, are from communities that enjoy clout in each of the above.

Rebuttal to Print India’s Article on Thakurwaad
For the last few years, there has been a constant rise of anti-kshatriya mobilization in Indian society, constantly fed by the very same people who call for the abolition of discrimination on the basis of caste and creed. Their narrative is often complemented with rampages on Kshatriya history, which is now peddled very openly among the masses. At the forefront of this systematic alienation of the Rajput community, are media outlets like Print, which under the garb of socialist liberal media organizations, promote caste hatred against the Kshatriyas. Print recently published an article taking potshots at the whole Kshatriya community on the alleged wrongdoings of few people. The article is named “Who are Thakurs of UP and why are they powerful? Answers are key to understanding Hathras” projecting the whole community as a band of rapists. The article written by Saniya Dhingra takes biased references and facts deliberately distorted in order to fit into the narrative. In this article, we will try to understand the different narratives that are imposed upon Rajputs today by these media organizations.

The article starts with the expression of the Bahubal of Thakurs throughout UP, this is when the article was solely focused on the incident that happened in Hathras. The author very conveniently ignores the point that the accused in Hathras case were neither Bahubali nor was financially well off, in fact, some of them worked on a dairy farm on a monthly wage of Rs. 8,000/- at a place 25 km away from their homes. In one of the video interviews of the accused’s father who was working at his farmland, explained how he wants to stay at home at this depressing time, but is unable to do so, as he won’t be able to feed his family unless he works every day. The picture shown below is of the majestic Haveli of one of the accused in Hathras case: The Bahubali Thakurs of Hathras.

Next, she tries to explain the clout of Rajputs in political society through a shoddy analysis. She prepares a list of UP CMs in the past, but very conveniently only covers the list of the first 42 years i.e until 1989, through this she tries to draw a conclusion that Rajputs have been in power for a considerable time, holding the post 3 times as state heads among 14 chief ministers till 1989. What she didn’t mention is the duration of their chief ministership i.e. only 5 years in a period of 42 years (VP Singh was CM for 2 yrs, Vir Bahadur Singh was for 3 Yrs & TN Singh for just 6 months). She also doesn’t mention that in the next 30 yrs, after 1989, 26 yrs have been ruled by OBCs & Dalits in UP. Clearly, Rajput being the dominant power in UP Politics is another propaganda to alienate society and invoke the feeling of resentment among the Non-Rajputs against the Rajput community.

Many a times when we target an individual or a community blindly, we end up making so many negative remarks that they even mutually contradict. 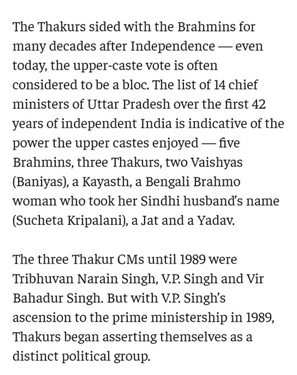 What’s amazing is that, next in that article Rajputs are being accused of something that they were never good at The Bahi Khata Business. Historically Rajputs have never been involved in the Bahi-Khata business, this has been the occupational history of Mr. Shekhar Gupta’s (Founder of Print India) ancestors & even if it is true why is it projected as a sin in this article? Are they trying to say that Rajputs shouldn’t enter this field and this should be exclusively reserved for Mr. Gupta’s community? 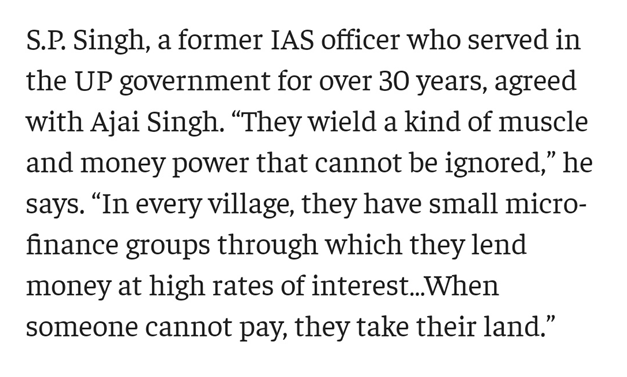 What the article mentions next, can go down in history as one of the best examples of Yellow Journalism and How Propaganda journalism can be distant from reality, best explained by Print media & Sanya Dhingra, even seasoned journalists like Mr, Gupta resorting to such fallacies best describes the extent to which people can go in order to run the smear campaign against a community. Here she says that Thakurs have been so essential and dominant in UP that Mayawati & Congress never dared to say anything against Thakurs. Even a rookie in the field of the political history of UP can tell you that Mayawati’s whole political career started as an Anti-Rajput campaign and she only gave the slogan:
“Tilak, Tarazu aur Talvar inko Maaro Jootey Char”
Tilak signifying Brahmins, Tarazu Signifying Vaishyas, and Talvar signifying Kshatriyas. 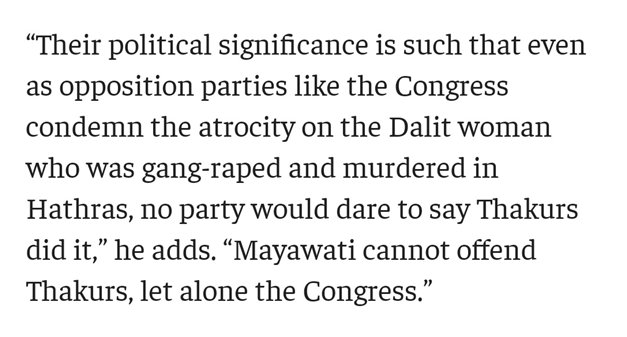 As far as Congress is concerned, their whole politics has revolved around Anti-Rajput sentiments, maybe she is unaware of Jai Narayan Vyas’s style of politics who she mobilized the common public against the Rajput Kings and often the violence that erupted after his initiation was not only limited to the feudal lords but often resulted in the torching of houses of common Rajputs. The seeds sowed by Jai Narayan Vyas in pre-independent India against the Rajputs is still reaping it effects even after 70 yrs of Independence. Congress’s style of politics has been majorly Anti-Rajput From removal of the privy purse to the imprisonment of Maharani Gayatri Devi, to the introduction of ceiling act and statewide arrests of Rajput youth after the introduction of the act in 1960s or the destruction of Jaigarh Fort to even the current Rajasthan Congress government’s policy of unnecessary intervention of slanderous content in Rajput history on the initiation of its Jat education minister Govind Dotasra has been a well-known fact and a matter of resentment among the community in Rajasthan. When Rahul Gandhi, who otherwise a Proud Shivbhakt Kashmir Brahmin, who keeps mum when the perpetrator is from other communities specifically targets and singles out an entire community due to an incident that has no relation with Rajputs, that speaks volumes about the policies of Congress and the systematic alienation pitiful condition of Rajputs in India.

Next, views of a person named SP Singh are projected as the gospel of truth who tried to showcase how the whole Rajput community is violent in their behavior. He mentions Brahmins & Ahirs too being violent but the medal of honor was specifically reserved for the Rajput, as obviously, the narrative needs to be set. No mention of deeds of Jats/Gujjars during the reservation agitation in Haryana/Rajasthan for obvious reasons. 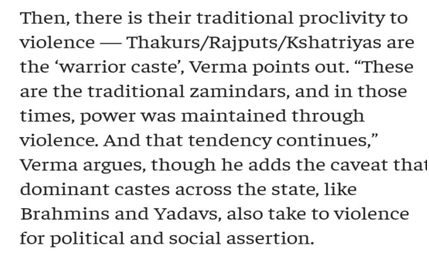 Now, as we are about to reach the end of the article this further deteriorates, from being a propaganda piece to a hilarious commentary. The article next mentions that Rajputs had the largest number of Kingdoms in pre-independent India, & further go on to proves that only Royal Rajputs have found a place in politics & the ‘Psyche of Revenge’ among the Rajputs is due to the loss of power. Clearly, the generalization of 8-10 crore Rajputs as Royal elites is a hilarious statement, the authors at Print lack even the basic socio-political and history of this country, at the time of independence there were around 560 princely states in India, out of which around 300 were ruled by Rajputs, but it’s really hard to believe or even imagine that all those families of 8-10 crore Rajputs held Royal estates at the time of independence. In fact, the majority of Rajput families at the time of independence or even today are involved in Agrarian activities, which the print itself mentions at some point in their article. One really needs to be high on hatred to ignore the presence of commoners like Chandrashekhar, VK Singh (about whom Mr. Gupta or then infamously called Mr. Coupta wrote a fake story), Anurag Thakur, Rajyavardhan Rathore, Gajendra Shekhawat, etc.
The article ended with all these notions without a single mention of the fact, that the only Rajput Royal who became PM was the same person who introduced the reservation for Backward classes. And neither Chandrashekhar nor VP Singh ever did Rajput politics and were leaders of common masses, something that yellow journalism want to ignore these days. 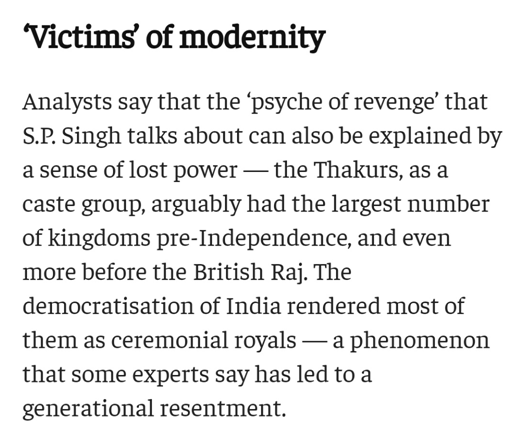 As far as the Dominance of Rajputs is concerned, the developments post Hathras case has very well exposed their double agenda of projecting Rajputs as oppressors on one occasion and privilege on others. As far as privilege is concerned, this is the kind of privilege that the Rajput community gets on a daily basis.

Through this article, I have tried to showcase how the media outlets in this country are full of contempt and hatred for the Kshatriya community, a community that has sacrificed generations in the service of this country. I rarely expect an apology from such organizations who work on agenda, but it’s for the Rajput community to understand their foes and the extent to which they can go for the systematic alienation of the Rajput community. In today’s context not much will change unless a mainstream middle-class leadership, that is both knowledgeable and sensitive to sociopolitical trends rises and takes up the initiative in its own hands. We do not need Anachronistic bigots and fanatics who mislead the community on its priorities rather which works on the socio-political concerns of the community. We need sensitive mainstream and yet self-aware Rajputs who know the laws of the land can articulate with sensitivity and as well those who do grassroots work.

Being the powerhouses of Bollywood, the Khatris supported by Pathans and Brahmins caricatured & stereotyped Rajputs in demeaning ways. However they made well usage of the Industry and Cinema to market themselves and create an immense positive image of their own community.

There
Medieval era and late-medieval era witnessed plebianisation of Rajputs, as Rajput clans declined socioeconomically due to Turkic rulers and then further lost it to the Jat and Brahmin groups that collaborated with Mughals and British - eg. Surasena Yaduvanshi Rajputs (also called Jadons) lost lands to Sinsinwar Jats during 17th century.

Until 1947, most Rajputs were farmers, ranging from Zamindars to petty cultivators. With formation of the Indian Union, the Rajput Monarchs of this region surrendered their sovereignty, forts, monuments, cities and towns just as their non-Rajput counterparts. However, unlike their Jat, Maratha & Sikh Royal counterparts who still lead their people, the Rajput royals even abandoned the leadership of the Rajput laity, rendering them unorganized and politically rudderless. The Jat & Maratha Each of the above were further compensated Rajput laity, which was dependent on agriculture was politically destroyed, though

Every kshatriya clan saw both

For eg they hint at Hathras rajputs being the powerful Bahubali Amrish Puri style suppressing everyone including the Jats.

However, rajputs rulee Hathras only until 1700s, after which a Jat dynasty supplanted them.

Gulaal highlights that anxiety which Brahmin-Bania State continued to harbour towards the Rajputs.
Do check how Liberals support Jat reformers or OBC reformers or even helped Sikh moderates counter Khalistan.

Unfortunately, that’s what they don’t do here. Instead they attack an entire community & create a mountain of false narratives to bash and shame with no constructive end.
I have talked to Rajput Comrades saying that they are discriminated by Mukherjees , Roychowdhury etc who even censor their writings.

Most rajputs were clan retainers of their clan-chiefs…but 4gen descendants of Nagar Seths & Moneylenders can’t understand that.
The blunder of replacing class struggles with race/caste in West & wannabe West (India) has benefited the likes of Coupta, Dhingra or Roychowdhury who ironically earn virtue points by targeting the deprived.

Understanding Caste of the Left

They are joined by Brahmins of many hues , but predominantly Bengali, Kashmiri & Marathi.

Then there are Jats & Ahirs but they are all newcomers and are at the lower levels.