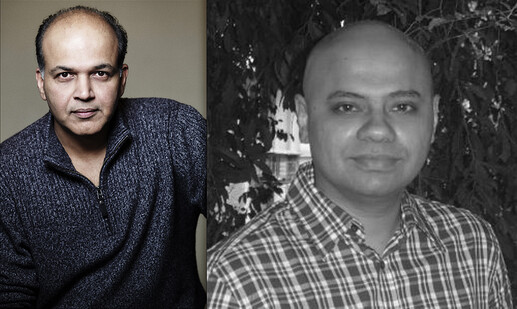 { We recommend this article to every Rajput member to understand the origins of the two narratives that were employed to publically write-off their past and make them socio-politically redundant.

We also recommend this article to every enthusiast of Indian medeival history ,every student of journalism and keen watcher of Indian (caste) politics. This article must also stand as an evidence of HorseShoe Theory as both Indian Left and the Indian Right are united and handled by the same caste groups that use their platforms to attack the same caste-groups}

Last few years have seen a flood of articles, media presentations, live TV discussions and outright malicious online propaganda seeking to educate common public about the eternal military weakness of Rajputs and the resultant habit of “losing all wars”, their supposed misogynism and “selling their daughters to Mughals to save their principalities and fiefdoms”.
What’s scary is that not as many individuals see this for what it is, blatant mudslinging propaganda seeking to alienate and shame an entire community of Rajput people.

Congressi Brahmin elites were always at forefront of anti-Rajput polarisation, maybe because it gave them a sense of validation

The ramifications of this is best illustrated when noted journalist Ajaz Ashraf even stated in a 2018 article as reaction to Padmavat-protests that “Rajputs were always on the wrong side of history.” [Read here] When well-educated journalists and intellectuals can fall prey to such manipulations, one may forgive the masses of inability to comprehend complexities of mass-media and multi-media campaigns.
Let us discuss the two narratives and their sociopolitical ramifications in depth.

When the term “Kachwaha” is uttered, what comes to your mind? Is it cities like Gwalior, Jaipur, Sawai Madhopur founded by the Kachwaha or Kachapghata tribe? Is it the Chausatth Yogini Temple of Morena? Is it military victories of Raja Man Singh over Afghans in Attock, Afghanistan and Orissa? Is it prominent generals like Mirza Raja Jaisingh who defeated Shivaji and helped him rise? Is it Jaisinghpura (Connaught Place) or Gurudwara Banga Sahib that Jai Singhji gifted Guru Hari Das, both established by him? Is it the Jantar Mantars by Sawai Jai Singh? Is it PVC Havildar Piru Singhji Shekhawat or MVC Brigadier Bhawani Singhji, the last ruler of Jaipur? Actually none of these ; in fact not just that the public would be made ignorant of the above, the only fact preserved and circulated in public domain by narrative-setters is : Harkabai’s marriage to Emperor Akbar i.e. Jodha-Akbar story. 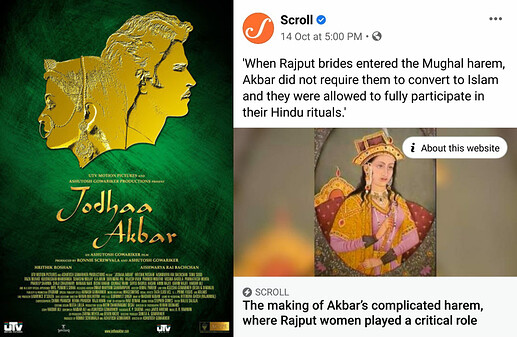 imgonline-com-ua-twotoone-8ugjXbHRCk1311×856 314 KB
Jodha-Akbar was made by Ashutosh, a Marathi Brahmin; Scroll.in, owned by maratha Samir Patil regularly circulates the above. However, while Gowariker’s lionizes his community in Panipat (2019), while Patil’s Scroll.in maintains silence on Maratha-Muslim marriages

The Narrative-setters and Opinion-makers not just give an impression that nothing as such existed but they also shape the public memory and popular culture via hindi cinema driven popular culture and use English media to drive an intellectual discourse that paints them as uncompromising meritorious and invincible warriors who saved Hindus and India. So why the contrast?

As far as the popular culture goes, hindi cinema was aggressively exploited by Maratha-Brahmin filmmakers to push the above narratives. This is best exemplified by noted filmmaker Ashutosh Gowariker, himself a Marathi brahmin. The contrast of his politics with respect to Rajputs and Marathas is best reflected in Jodha-Akbar (2008) and Panipat (2019). However, it would be unfair to blame Gowariker completely - rather it is an “intellectual” and “elite” ecosystem where Marathi Brahmins and Rajputs sit almost opposite in terms of representation.

imgonline-com-ua-twotoone-KBTRUIy9qFw2611×943 435 KB
Mr Mahurkar is a Information Commissioner, Govt of India, & a Maratha. The contrast of the two tweets only explain the contrasting treatment meted out to Rajput and Maratha history

There have been hundreds of polemical articles written since then, across mainstream media, even by “academicians” and “journalists” of repute to perpetuate that Rajputs in general were tied to Mughals by such marriages. Those perpetuating it include not just well-known demagogues like Dilip Mandal but also well-respected academicians like Harbans Mukhia. The important fact that there were only 27 marriages - all restricted to elites of few Rajput clans as against the fifty others, is unfortunately omitted by malignant propagandists for sweeping narratives. The fact that there were no such examples from the Chauhans, Tomars, Parihars, Parmars, Chandels, Solankis , Guhilots, Jadejas,Pundirs, Kalachuris and others, is deliberately omitted for making a casteist political narrative. Furthermore, they would skip the fact that such political-marriages were a norm across medieval World. For instance, Rajput Royals contracted such marriages even with Adivasi Royals. Similarly, Jat, Ahir, Gujjar, and even Khatris were often connected to Rajput Royals and Mughal Royals through concubinage or marriages.However none of the essays on the subject published in the mainstream would even mention the above, skipping the above for political and polemical purpose of attacking the rajput laity.

Without coincidence, this narrative also has its roots in the milieu of Marathi Brahmins and Marathas. On May 25, 2015 , Girish Shahane published an article on Maratha-owned Scroll.in berating the Rajputs as “defeat-specialists”. 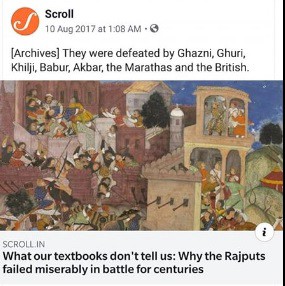 It is without much surprise that they chose to write-off the long history of Rajputs with a brief cursory essay brimming with overt bigotry. Any wise-reader could see through Shahane’s bluff when in the very starting paragraph he wrote that “Delhi Sultanate restricted Rajputs to arid regions”. To this, any socially-aware reader would have wondered as to what happened to Rajputs of Gangetic plains, Chhattisgarh, Punjab and Himalayas. The very fact that Shahane believes that Rajputs are exotic to Rajasthan, speaks a lot on his “expertise and values”.

Then he dubs Prithviraj III as “defeat specialist” for his defeat at Second Battle of Tarain, while trivializing his victory in the First Battle of Tarain.
He dubs Rana Sanga as “defeat specialist” for his defeat at Khanwa; however omitting the fact that this very person had defeated both the Malwa Sultanate and the Lodi Sultanate twice each. He also very deliberately skipped the fact that the same Rana Sanga had also defeated the Rajput-origin Gujarat Sultanate and had routed the Mughal forces at Bayana in 1526.

He also dismisses Pratap as “defeat specialist” for the stalemate at Haldighati, despite the fact that both Pratap and later his successor Amar Singh together resisted Mughal Imperial forces for 40 years together, despite being politically alone. He rejects Pratap as nuisance - a word he refrains from using against Shivaji.
For him, Rajputs of Rajasthan, Haryana and Western UP who regrouped after fall of Khilji Sultanate and defeated Tughlaqs at Battle of Singoli or the Madhad Rajputs of Haryana who defeated Mughals at Kaithal are “defeat specialists”, but not his own Maratha elites who couldn’t regroup and revive even three centuries after Khilji’s destruction of Deogiri. 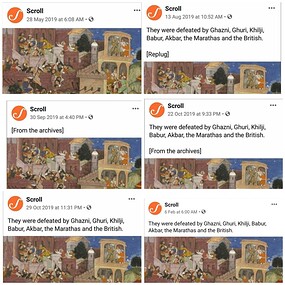 800×800 171 KB
Samir Patil’s Scroll.in has shared this article almost monthly for five years. However neither Girish Shahane nor Patil’s Scroll.in answer where were the mighty Marathi elites for almost a millenium? Why couldn’t they revive three centuries after Malik Kafur’s destruction of Deccan?*

Thus the mighty despots of South who ruled large exorbitant empires - the Kakatiyas, the Cholas, the Pandyas and Hoysalas are not “defeat specialists” although they were wiped out by Malik Kafur; but the label is apt on Rajputs of North and Northwest India - the Chauhans, the Parihars, the Parmars, the Tomars, Bhatis, Kalachuris etc who continued to establish new cities and towns even in 17th century despite being geo-strategically more vulnerable and less resourceful than their counterparts elsewhere.

Finally he blames he invokes opium as an answer to his rhetorical question, as if rajputs scattered across this huge geography from Sindh to Bihar even had a common diet.

For Shahane, retreats by Prithviraj or Pratap insinuate cowardice , while the same by Shivaji marks “wise tactics”. Hence Girish slyly marketed his own culturally inherited prejudice and caste-bigotry towards Rajputs as a clever rational take-down of Hindutv. 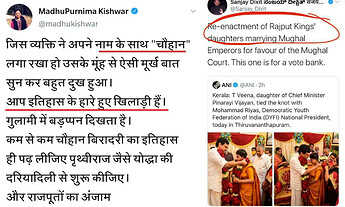 imgonline-com-ua-twotoone-lZsekKR78FEGKyiP2125×1280 479 KB
Both Madhu Kishwar and Sanjay Dixit are Hindutvadi ideologues and opinion-makers. Would they attack Marathas similarly? No, because Maratha history is central to RSS heritage

Many wrongly view these two narratives to be “left-liberal” concoctions. However, both these anti-Rajput narratives have a Rightwing Maratha origin, especially in the literature of Marathi Brahmin activists of 19th and 20th century. They believed that the Rajputs of North and Northwest were cowardly, debauched and weak Hindu kings who compromised on both Dharma and the Nation, and that it were their more virtuous, brave and militarily-sagacious Deccani ancestors who saved both. They even blame the treacherous Rajputs for betraying them once again at Panipat. Thus the Rajputs from Sindh to Bihar & Rajori to Malwa were just “beti-giving” “defeat specialists”, while the Deccanis ie Marathas and Marathi Brahmins were uncompromising military-geniuses. These narratives are also upheld by RSS, which has origins in Marathi brahmins and is largely led by them till this day.

So how did narratives of Marathi brahmin rightwing, happen to be internalized and consumed by “left-liberal” circles?

Scroll.in is a portal owned by a maratha Samir Patil and was launched in 2014, exactly the year when BJP had won national elections. BJP politicians began targeting the medieval Mughal emeprors, much to the chagrin of many “left-liberal” Influencers. Girish and the staff at Patil’s Scroll convinced the circles that it was Rajput history, not Maratha history, which was central to RSS vision. Thus anything that demeaned Rajput past and attacked Rajput people, was indirectly a victory over Hindutv, which was widely bought.

Hence, if one notices Scroll glorifies Mughal history in order to have a leftist fan-base and it demeans Rajput history in the most scathing language and sweeping narratives - even as it suppresses any rajput scholarly rejoinder. However, as a maratha-owned portal it largely remains ambivalent on Maratha history and tall rightwing claims surrouding it. Further, articles are written to set negative narratives by cherrypicking drawbacks of any Rajput entity, while the same cherrypicking is employed to glorify their own.

By carefully wrapping their anti-Rajput bigotry as anti-Hindutv both Shahane & Patil, convinced Elite “liberals” as distributors of their anti-Rajput narratives. These were the same people couldn’t tolerate a libel against medieval Turkic Emperors (individuals) but here they were ready to write-off a community which they barely knew, however, remains ironical.

This way through aggressive lobbying and political influence, the Marathi brahmins-Marathas were not just able to establish their historical superiority but were also able to reduce the history of Rajputs from Sindh to Bihar to twin-slurs: “daughter-sellers” and “defeat-specialists”. While they established their own acceptability and superiority in both rightwing and leftwing platforms, they isolated Rajput history on both - rightwing and leftwing political platforms. This has not just attached a sense of stigma to Rajput history, but also harmed understanding of current socioeconomic problems of Rajputs. The massive endorsement of these narratives by celebrities, including like Prof Mukhia (of JNU) and Prof Kothiyal (of AUD), only that here was a community, whose past and present could be toyed uninhibited.

As a result of this, for every mischievous opinion-maker, any discussion on current socioeconomic problems of Rajputs has roots in either “they not having won any war in their history” or having “sold daughters” in the past. For eg. in the article mentioned before, Aijaz Ashraf couldn’t see the roots of Karni Sena in rampant rural unemployment or the fact that the rajputs were made voiceless , rather in “rajputs being on wrong side of history”. Thus they have harmed the Rajput community sociopolitically too.

While these two narratives made the Rajput public sociopolitically redundant, the narrative of “Thakurvad” run by Shekhar Gupta and the Congress political-class put the final nail in the coffin as it incited public-outrage against Rajputs across the nation.