The Aravalli Range that forms the hardy spine of Rajputana has some of the highest peaks concentrated in the western portions of Mewar (forming the boundary with the plains of Marwar). As the range tumbles north, the peaks are much reduced in height and the valleys between them broaden out into vast plains. Ajmer forms a cul de sac for the range—from this strategic city road run due west to Marwar, east to the Ganga plains, and south to Mewar.

North of Ajmer the horizon appears flat all the way to Delhi, but halfway into the journey the Aravalli peaks abruptly rise again. This cluster of hills, of very modest height, forms a triangle the broad base of which nestle the earliest forts of the Kachchawa Rajputs. The narrow end of the triangle points at Delhi and contains only isolated hills—further on even these small hills disappear and mere ridges merge with the plains around Delhi. 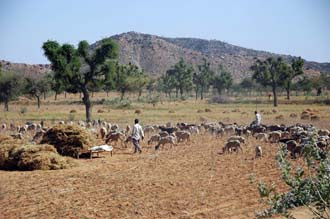 Known in ancient times as Matsyadesh [1], this region bordered the semi-desert Jangaldesh on its west, with the triangle of the Aravallis forming the border. However, a branch of the Kachchawa clan breached this hilly border to colonize the modern districts of Sikar, Jhunjhunu, and Churu in the 15th Century. Since that time the land covering these districts has taken the name of its dominant ruling clan: the Shekhawats.

The growth of the Kachchawa clan in Matsyadesh parallels the expansion of the Rathors in Marwar and of the Sesodias in Mewar. Their early history of migrations and battles for territory can be read elsewhere—for the purpose of this post it should be enough to state that the Kachchawas were feudatories of the Chauhan rulers of Ajmer and their celebrated chief, Rao Pajavan fought in the first Battle of Tarain.

Their subsequent history, when the Turk invaders occupied both Delhi and Ajmer, is not clear. As a small clan, they would in all probability have been quiet tributaries of the Turks, finding occasion to rebel and withhold revenue whenever the Sultanate army was besieging a strong Rajput fort like Chittor or Ranthambhor, or was fighting off a Mongol invasion.

But over the centuries they appear to have become independent as the numerous forts and temples built by a succession of rulers testify—they also became prominent enough to contract matrimonial alliances with their contemporaries like the Chauhans, Solankis, and Rathors. The numerous younger sons of each Rao founded his own clan branch, which added the suffix ot (or as it is written now in English awat )[2] to the founder’s name, and made it their own surname.

Thus in 1389 Baloji, the third son of Rao Udaikaran, received the estate of Barwara to the northwest of Amber. This estate remained dependent on the parent kingdom even in the reign of his successor Mokal—but with his son Shekha[3] the clan-branch had grown sufficiently in numbers to stake a claim for its own separate kingdom. This period coincides with the decline of the neighboring Delhi Sultanate after the death of Sultan Firuz Tughluq (1388). The new technologies of manufacturing slender curved swords and breeding indigenous horses, which had emerged from the warfare of the early Rajputs against the Turk invaders, also made their mark in Shekhawati[4].

Rao Shekha and his clansmen captured hundreds of villages and forts from the petty feudatories of the Sultanate and even of the Chauhan Kingdom that had preceded it. Thus Rajput clans like Chauhans, Gaurs, and Tomars, converts like the Kaimkhanis, as also Turks and Pathans were brought under subjugation. With their assistance, Rao Shekha fought off an invasion by the parent Kingdom of Amber and thus established his own independent kingdom with the capital at Amarsar—since he was the first independent Rao and had bequeathed a substantial territory to his clansmen, they and their progeny became known as Shekhawat.

The formation of Shekhawati pushed the boundaries of Rajputana further north, as the formation of neighboring Bikaner had also done in that same period.

Further expansion of Shekhawati and even its existence as an independent kingdom was blocked by two important factors—one was the creation of numerous estates for the many children of each Rao. These estates fought each other for supremacy in Shekhawati as listed here.

The second factor was the revival of the Delhi Sultanate by the Lodi and Sur Afghans. The Kaimkhani chieftains took the assistance of the Lodis in 1451 to capture Jhunjhunu and Fatehpur even while Rao Shekha was alive. A local conflict with these Nawabs remained a permanent feature of Shekhawati and its outcome depended on an alliance with the power at Delhi.

Thus the later Shekhawat Raos joined the Mughal Empire of Akbar as mansabdars —the wisdom of this policy was evident since the Kaimkhani Nawabs and the parent Kachchawa Kingdom of Amber had already made an alliance with Akbar. The formation of new estates and divisions within the ruling family continued in this period—Rao Lunkaran and his younger brother Raisal were both mansabdars. The latter also received the title of Rao and formed a separate estate around the important fort of Khandela. Initially, the chieftains of Shekhawati (Hindu and Muslim) served in the nearby regions like Nagaur, Sambhar[5], and Hisar—but in later times they also fought in the Deccan and Central Asian wars of the Mughals.

The many sons of Raisal went on to found their own estates—his seventh son Girdhar Singh was recognized as Rao of Khandela by the Mughal Emperor Shah Jahan. With such internal splits the Shekhawats fought each other almost as much as they fought the Kaimkhanis or the Mughals. But it was a custom among the Shekhawats that when the entire clan was facing a common danger, they would assemble at one place and make plans for jointly resisting the enemy.

In the reign of Aurangzeb, Rao Bahadur Singh of Khandela was serving in the Mughal army of the Deccan, under a Mughal noble of the same name (Bahadur Khan). This army was deployed in 1678-79 against the Maratha ruler Shivaji—a quarrel broke out between the two Bahadurs over some issue and the Rajput chief returned to his own country with his clansmen. In March 1679 Aurangzeb sent a Mughal army under Darab Khan to “ punish the Rajputs of Khandela and demolish the great temple of that place .”

This invasion overlapped with Aurangzeb’s occupation of the Rathor Kingdom of Marwar, the imposition of jaziya (2nd April 1679), and a long war against the united Rajputs of Mewar and Marwar. In Khandela itself the Mughals went far beyond punishing Bahadur Singh, for they also pulled down temples at Sanula and other places—it seemed that their aim was to uproot the Hindus from this region, which was so near to Delhi. However, only Khandela could be occupied by a Mughal garrison as by that time the Shekhawats had briefly united against the invaders.

The rise of Jaipur

All through the reign of Aurangzeb, Rajputana remained in the grip of war. After his death, Sawai Jai Singh of Amber formed an alliance with the other Rajput rulers against the Mughals—once the desired result was achieved Jai Singh became prominent in the Mughal nobility and persuaded the new emperor to end the hateful jaziya tax on the Hindus. He also had good relations with the Marathas who were then rising to power.

Whether by negotiations or through war Sawai Jai Singh annexed vast territories from the Mughal subahs of Ajmer, Delhi, and Agra into his own kingdom, which was adorned by a new fortified city of Jaipur. Naturally, the growing power of this Kingdom of Jaipur was also felt in Shekhawati—the parganas of Amarsar and Manoharpur were transferred to Sawai Jai Singh in 1717 and 1725. He re-assigned them to the Shekhawat chieftains on condition of their becoming tributaries of Jaipur. 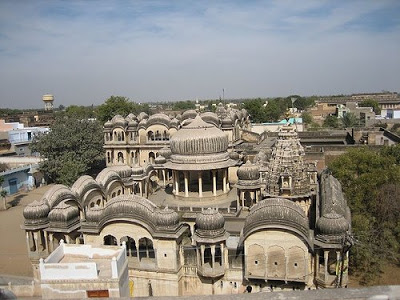 Nawab Qaim Khan of Jhunjunu, in service of the Mughals, had subdued the Sadhani Shekhawats and had annexed their lands—as the authority of the Mughals waned the Kaimkhanis aspired to independence so Emperor Muhammad Shah transferred their lands to Sawai Jai Singh. The latter gave aid to Sardul Singh Shekhawat who conquered Jhunjunu and killed the Nawab—his descendants ruled the town as tributaries of Jaipur.

Around that time Nawab Daulat Khan Kaimkhani of Fatehpur, also a Mughal mansabdar, was murdered by his own brother at Rewari. When his widow complained to the emperor the task of redressing her claim was assigned to Jai Singh—the Rajput ruler in his turn deputed Rao Shiv Singh of Sikar to annex Fatehpur from the Kaimkhanis in 1731.

Khandela had been recovered by the Shekhawats in the confusion following Aurangzeb’s death—the brothers in the ruling family began fighting each other for the right to rule Khandela. The result was the division of the estate and the eventual subjugation of the brothers by Sawai Jai Singh of Jaipur. In this manner the entire Shekhawati federation was permanently annexed to Jaipur—Sawai Jai Singh did not add just land to his kingdom; he obtained some of the fiercest warriors of that land for his army[6].