These days the Social media has witnessed much clashes between the Kshatriya community and the feudal OBCs who want a Kshatriya Past. Sanskritisation or its specific form Rajputisation is being used by RSS brahmins & Dilip Mandal backed BAMCEF to pit these against Rajputs. Syncretic past is used to create fault lines.

For eg Rana Punja was a Solanki who was established as a Bhil a 2 decades back despite objection from Mahendra S Mewar & Manohardas Solanki, Punja’s descendant who lives in Panarwa village granted to Punja’s grandfather.
Now except the concerned Solanki families, no one wishes to reclaim Punja for fear of Rajput-Bhil animosity. This was RSS’s doing.

Let me share Mahendra Mewar’s letter on behalf of Manohardas Solanki to the then President. 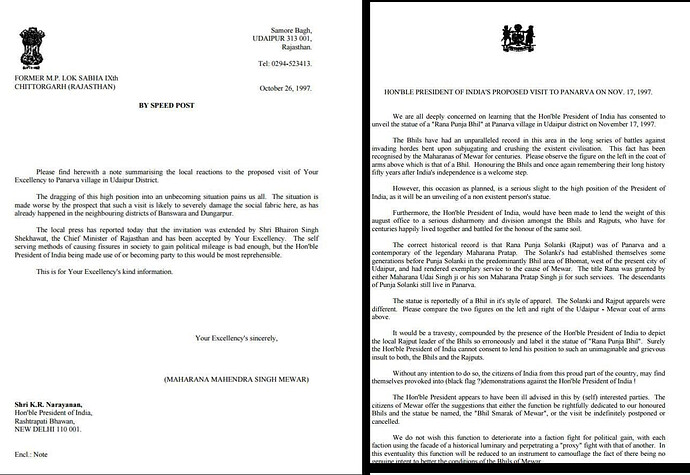 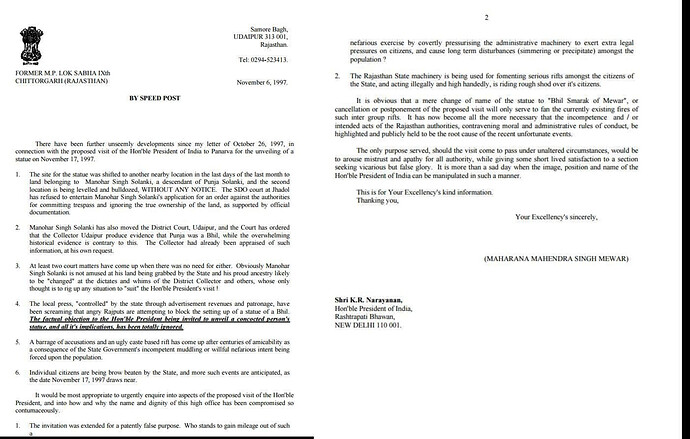 Yes sir.
Often those who support this, argue that such things help many depressed communities gain confidence and social pride.

Jats had Bharatpur, Dholpur, Hathras and zamindaris in Haryana.

RSS and Hindutvadi groups wouldn’t promote these small kings and kingdoms to give them pride. Instead they will go about changing identities of Rajput figures.

Clearly a conspiracy to pit other castes against Rajput/Kshatriya community.

However, RSS driven Sanskritisation/Rajputisation is backed by a huge all-powerful coterie of Western and Indian “left-liberal” academicians who have been redefining Rajput identity to suggest that “kshatriya is a fluid social status that all tribal Adivasi and Shudra chiefs could achieve after gaining lands, while the rest of their tribe remained Adivasis or Shudras”.
These Academicians include: Dirk H Kollf, Cynthia Talbot, Sumaira Shaikh, Farhana Ibrahim, Aparna Kapadia, Lylla Mehta, Tanuja Kothiyal Tiwari, Satish Chandra.