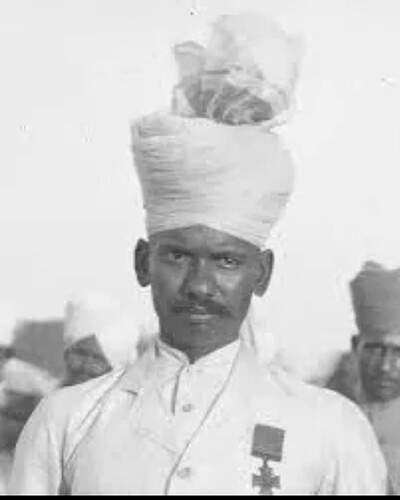 Chatta Singh was born in 1886 in Uttar Pradesh, India, and was a Sepoy (infantry private) in the 9th Bhopal Infantry of the Indian Army during the First World War.Singh was awarded the Victoria Cross for his actions on 13 January 1916 during the Battle of the Wadi, in Mesopotamia (present day Iraq). He left cover to rescue his Commanding Officer who was wounded and lying in the open. He treated his wounds and stayed with him for five hours until it was safe to move, all the time under intense fire.

For most conspicuous bravery and devotion to duty in leaving cover to assist his Commanding Officer who was lying wounded and helpless in the open. Sepoy Chatta Singh bound up the Officer’s wound and then dug cover for him with his entrenching tool being exposed all the time to very heavy rifle fire. For five hours until nightfall he remained beside the wounded Officer, shielding him with his own body on the exposed side. He then, under cover of darkness, went back for assistance, and brought the Officer into safety.Chatta Singh later achieved the rank of Havildar, (equivalent to a Sergeant). He died in 1961 in Tilsara, Kanpur, India.