An incredible story of a brave heart paratrooper Deependra Singh Sengar, IMA, IIM Ahmedabad, who is now a successful corporate man but was once declared unfit to even walk. Please read this below write up written by his fellow Paratrooper:----

It was the day after Valentine’s Day, 1998. Sengar had just been received at the Guwahati airport by the unit’s escort team. At 5’6” and 52 kgs in weight, you could easily mistake him for a postgraduate student at Guwahati University. Sengar was re-joining the unit in active operations in the North East – after weeks of pleading, screaming & struggling against the orders of Col Ivan Crasto, the Commanding Officer – to man the administrative rear echelon of the unit in a cosy, sleepy town in Himachal Pradesh.

That is who he was – a man of action. And men of action, as you would know, abhor routine admin jobs!

The first message he overheard, 15 minutes in transit, on the secured communication radio link was garbled. 5-6 senior militant leaders in a house, armed with automatics, pinpoint location, high credibility of info, apparent transit profile, likely to move out soon. The Quick Reaction Team (QRT) from the unit was starting out but could hit the target only in an hour. Sengar quickly realized that with a short detour, he could be at the target in 20 mins. Saving 40 mins could mean the difference between success and failure.

A flurry of messages later, Sengar had convinced the Battalion HQ that he and his escort team were best positioned to initiate contact with the militants before they disappeared. The QRT could follow. Now, escort teams are usually a ragtag team of whoever is available. Fully kitted out, sure – weapons, ammo, secured communication – the works. But still, certainly not the first choice of guys for going into combat with. But that didn’t deter Sengar. He swung in and hit the target in 20 mins, as planned. A short, sharp exchange of fire ensued. 2 reds down, 3 had fled.

It is then that Sengar realized that he had been hit. Two bullets had pierced through his abdomen, making a clean, almost unnoticeable entry in the front and a classic, disproportionate exit wound in his back. What they call in the medical world, rather disparagingly, a ‘clean’ shot.

The rest was a blur. The flurry of the evacuation process. Hand-carried, on four-wheel drive, by chopper, through the local hospital in the neighbourhood, and then to the Base Hospital at Guwahati. The long, unending line of surgeries. Cut, sew & cut again. After about 15 days of chopping and pasting, the docs were confident of a partial recovery in a time frame of about 18-24 months.

A miracle, they called it. But then, they hadn’t seen miracles – as yet.

Sengar was no pushover who could be tied down to a hospital bed. He was up and about in 45 days. He read books on his condition and realized that psychological recovery was as important as the medical one. He started doing what was in his reach- whether strict army hospital rules allowed or not. Sneaking out of the hospital, hobbling along to the theatres to watch practically every movie worth watching. & some which didn’t fit even that bill. 60 days from that fateful day, a Unit officer was getting married. Sengar, attired in a Lungi & a kurta (he couldn’t wear anything else – the scars hadn’t yet healed), with tubes and bags (If you must know – A colostomy bag & a bag directly attached to urinary bladder) immodestly but practically hanging out of his modest frame, hired a car and travelled 5 hours one way to Dehradun.

“Huh? All this to attend a frikking marriage??”, You might ask. Well, Sengar wasn’t the type who’d let anything – certainly not a little thing like 25 grams worth of random molten lead that burnt independent, solitary furrows through his intestines – come in the way of having the pleasure of seeing one of his mates being led, willingly to the gallows!!

Sengar hated hospitals. Much to the deep dismay of a bevvy of nurses there. He was back in the unit by early May, 98. The docs, fed up with his constant supplications to be released, grudgingly allowed him to get back to the unit, with the solemn promise that he would not exert himself, and stay confined to the unit HQs (chuckle chuckle).

Too difficult for someone who was called “Rocket” by the junior officers as Sengar was the recipient of the coveted “Dagger” in the Commando course, the one who was known for being one of the most physically fit officers and men.

Around this time, a training exercise was being conducted in the eastern sector and Sengar saw a chance to prove his fitness. He pleaded with Col Crasto to be allowed to get there, to ‘man the telephone’. Crasto finally caved in after Sengar was able to convince the doctors to pronounce him “fit” for active duty. Sengar had amazingly, defying every single precedent of recorded medical recovery in cases similar to his, convinced the docs to upgrade his medical category to SHAPE1.

He pleaded, struggled, nagged, nudged, begged, threatened, and resorted to blatant emotional blackmail of the vilest means known to be posted on the Eastern Sector.

In the middle of the exercise, news broke about the Kargil conflict and the unit was to airlift a team for the Kargil war. Sengar was back to doing what he loved best – back to action, leading a team. He led his team to capture Neelam post in the Kargil war, which was the highest post captured in the whole engagement by the Indian Army. By August 99, officially the Kargil war was over, but escalated engagements along the LOC still required the unit to stay in the area. And Sengar’s team was in the middle of the action – again.

A violent firefight with a group of freshly inducted militants. A burst of fire from an AK-47 tore through his upper thigh and hip. Bleeding profusely and his hip bone in tatters, we knew if we didn’t evacuate him in time, we’d lose him. A paratrooper in the Divisional HQ, a chopper pilot, who was on a routine training mission learnt of Sengar being hit. Without waiting for authorization, violating every rule in the book, flew in, he landed at a hastily secured patch at the base of the hill feature and evacuated Sengar to the hospital through a route not allowed for Indian aircraft – Sengar reached the hospital in 45 mins! A couple of more mins of delay, and he would have been history.

Back to the ‘cut n sew’ story; only, this time, it was more serious than the first. Sengar survived. Barely. He was transferred to Delhi’s super-speciality Army hospital two months later and it was then, that his parents were brought to Delhi and the news broken. All this while he was told that he would recover and be back in action in a short time- It took him another month to finally learn from the docs their verdict – He would never walk again.

This was a body blow (pun unintended) even for Sengar. He decided to quit the Army. He had no interest in peddling files clad in the fabulous olives. Once he had waded through the rivers of emotion, which lasted all of 24 hours, he decided to take charge of his apparently fragile destiny.

Sengar started researching options for an alternative career path. He was 30, single and had the energy of a bull – or three. It didn’t take him long to realise that he needed to tame the beast called ‘CAT’ – the Common Admission Test, to take a shot at passing through the portals of the premier business schools.

As he did a SWOT analysis, he identified that his analytical skills weren’t what they once were. So, he decided to take on the task of conquering Arithmophobia – his paranoia of numbers. He got all the math books and diligently went through class four to class 12 books. Minor hiccups like the fact that he had to be carried from his hospital bed to the car, or the fact that they had to make special provision for him at the classes, so he could recline on an ad hoc chair and take notes didn’t bother him one bit.

Sengar took the CAT in Dec 2000. Based on his results, he got a call from 15 of the 16 B schools he had applied to – IIM (A), IIM (B), IIM ©, IIM (L) …. A veritable who’s who of the B school list. Four days after he hung up his beloved Olive Greens, he got married. Eight days later, he joined the Indian Institute of Management, Ahmedabad. Two brilliant years of number crunching analysis later, Sengar graduated with distinction – on crutches.

Today, Sengar is a top management professional with Microsoft, in Singapore with a doting wife and two wonderful kids. If you thought that’s the final update on his story, wait, because, there is one final flourish.

After ten long years on crutches, Sengar decided he had had enough. He chucked his crutches into a corner & decided to rough it out. Slowly, and with tremendous perseverance, he started walking. In under a year, he was going for short jogs. On Sep 13, on a trip to India, he decided to revisit his old unit. He got in touch with the Commanding Officer, who invited him to go for a run with the unit in the standard Battle Physical Efficiency Test- with a loaded backpack and a weapon. And Sengar did.

Written by an officer of PARA SF 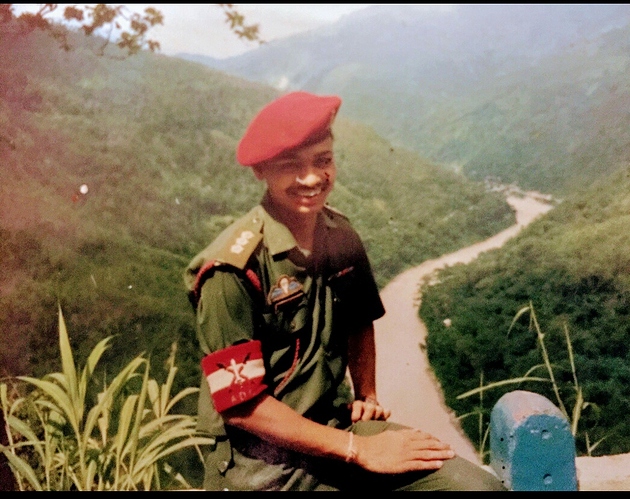