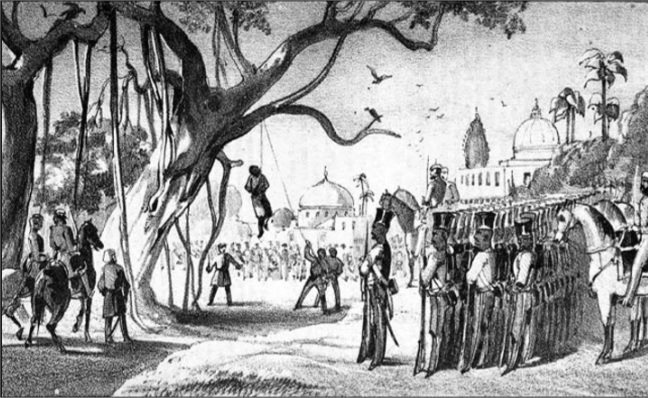 Public execution of an Indian rebel in 1857

Played a Prominent part in the Great Revolt against British rule in 1857.

On hearing of the patriotic uprising against British rule in the surrounding districts of Ghazipur, Azamgarh and Banaras, the proud Rajputs of Dobhi organised themselves into a tough armed force and attacked the British and their traitorous Indian collaborators all over the region.

Magistrate Fane appointed Raja Sheo Ghulam Dubey to be in-charge of the district and left for Benaras, however the raja failed to impose his authority on the people. The Raghuvanshi Rajputs attacked not just the British authority in tehsil Kirakat but invaded the adjoining districts.

They cut the British communications along the Banaras-Azamgarh road and advanced towards the former Banaras State. In the first encounter with the British regular troops, the Rajputs suffered heavy losses, but withdrew in order.
Regrouping themselves, they made a bold bid to capture Banaras. In the meantime, Azamgarh had been besieged by another large force of Indian patriots. The British were unable to send reinforcements to Azamgarh due to the challenge posed by the Dobhi Rajputs at the end of June 1857.
The unluckly Rajputs were handicapped as the torrential monsoon rains soaked their supplies of gun-powder The valiant Rajputs, however, bitterly opposed the British with swords and spears and the few serviceable guns and muskets that they had. The un equal battle took place about five miles north of Banaras at a place called Pisnaharia-ka-Inar. ( Note:Inar /Inara locally means ’ A well) The Rajputs were driven back with heavy loses across the Gomti river. The British army crossed the river and sacked every Rajput village in the area.

A few months later, Kunwar Singh of Jagdishpur (District Arrah. Bihar) the hero of the Great Revolt, advanced and occupied Azamgarh. The Banaras army sent against him was defeated outside Azamgarh. The British rushed reinforcements and there was a furious battle in which the Rajputs of Dobhi helped Kunwar Singh, their distant relative. Kunwar Singh had to withdraw and the Rajputs became the object of cruel reprisals by the British.

The leaders of the Dobhi Rajputs were “invited” in a conference and treacherously arrested by the British troops which had surrounded the place in Senapur village in May 1858. He was summarily executed by hanging from a mango tree, along with 12 of his kinsmen and 9 other followers.
The dead bodies were further shot with muskets and left hanging from the trees. After some days, the bodies were taken down by the villagers and cremated