Credits: Original Post by Airavat Singh on his blog, "Horses and Swords 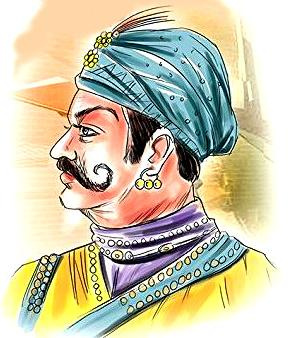 The Rajput kingdoms are called “clan monarchies” by historians. While little is known about the older clans, beyond coins and inscriptions, that fought the Saka and Kushan invaders, the Rajput clan system is illustrated with the Imperial Pratiharas. While their original kingdom was Mandor, the Pratihara princes ( Rajaputras ) established separate kingdoms in other parts of Rajasthan, Gujarat, and Madhya Pradesh. This method of expansion was repeated with the Chauhans who already had a 600-year history when the twin Tarain battles were fought. In all these years, as the population of the clan increased, ambitious Rajaputras of the Chauhan clan led their followers to capture fresh territories. In this way Nadol (near modern Jodhpur) was founded in the 10th Century—in the 12th Century, the Chauhan King of Nadol and his younger brother played a crucial part in defeating Muhammad Ghori in his invasion of Gujarat. In the flush of victory, this younger brother captured the principality of Jabalipura (modern Jalor) while one of his junior descendants similarly created the Kingdom of Devada (modern Deora) in the 13th Century. A fourth principality was founded by a Nadol prince at Satyapura (modern Sanchor).

These southern branches gradually acquired independence from the parent kingdom once they were able to muster greater resources. But in the north the Chauhan expansion remained under the direct control of the Kings of Ajmer—the ambitious Rajaputras were employed in the administration at the capital or were deputed to hold frontier forts and towns. One example of the former in the reign of Prithviraj was the Rajaputra Govindraj who, for some reason, was banished from the court. He founded the important fort of Ranthambhor, which commands the road to Madhya Pradesh—the story of his family will be related later.

After the Second Battle of Tarain in 1192, begins the second of the three main phases of Rajput History, namely the fiery resistance to the Turk invaders. Delhi, Hansi, and Sarhind were governed by Rajaputra princes who died fighting with their King at Tarain. Muhammad Ghori was unable to capture the Chauhan capital and had to settle for some tribute from the Rajaputra Hariraj . In the south-east, the chief of Ranthambhor, who as related above had been inimical to Prithviraj, agreed to be on the side of the victorious Turks. Delhi was attacked next but was stoutly defended by the Rajaputra Chandraraj and here too Muhammad Ghori had to be content with the promise of tribute—he left his slave Qutb-ud-din Aibak to watch over these recent conquests and returned to Ghazni.

But some of the lesser chieftains and soldiers of the Chauhans were not so fortunate. The prisoners from Tarain, the landowners who lay in the path of the advancing Turk army, and those now under the sway of Ghori’s lieutenants in the conquered region were converted to Islam. The men and their male children underwent circumcision, their women were forced to observe new rules of conduct, and they were all robbed of their ancient traditions and were taught strange new modes of worship in a foreign language. But, as will be explained in later posts, they were not given equality of status with the Turks.

Some families were converted at a later period and for differing reasons. But whatever the mode, their descendants have today evolved into large tribes inhabiting northern Rajasthan, Punjab, Haryana, and UP—these are the Kaimkhanis, Sarwanis, and Lowanis among others. The complete alteration in the way of living of these early converts must have left a deep impression on the minds of the Chauhans who remained true to their ancestral culture. They were determined not to let such a calamitous fate fall on their own progeny.

Immediately after Ghori’s departure Hariraj raised a fresh army and attacked Ranthambhor. Aibak rushed down to the scene and forced Hariraj to retreat but was not able to fight or capture him. Govindraj of Ranthambhor did not allow the Muslims to enter his fort and persuaded Aibak to retire for a money consideration. In his absence Chandraraj had made a bid for independence and Aibak laid siege at, and finally won, the fort in Delhi—this town now became the base of operations for the Turks against the rest of the Kingdom of Ajmer.

Prithviraj’s general Skanda joined hands with Hariraj and helped him to declare his independence. The two energetic men even attacked Delhi, defeated some Turkish units and looted their equipment. This audacious attack prodded Qutb-ud-din to collect his entire army and chase after the Chauhans who were cut-off near Ajmer. Aibak next besieged the Chauhan capital—having lost his best generals and soldiers but determined not to suffer the fate of the other converted Hindus, Hariraj and his family burnt themselves on a funeral pyre. And so in 1194, Ajmer was occupied by the Turks along with all the wealth of the dead Hariraj and his family.

The dejected followers of Skand and Hariraj traveled to Ranthambhor and took up service with Govindraj. This Rajaputra chieftain, who was not present at the Tarain battles, was deeply affected by the fate of his kinsmen and by the stories of Turkish brutality and the conversions of prisoners. He and his son accumulated wealth and power and declared their independence in 1215—it was only a decade later that Sultan Iltutmish of Delhi could launch an all-out attack on Ranthambhor. The fort was garrisoned for the first time by the Muslims but a few years later Vagbhatta Chauhan , the grandson of Govindraj, defeated the Turks and recaptured his ancestral fort.

This ruler captured many outlying towns and forts and stationed large infantry forces in them to ward off an attack on his capital. The strategy worked and Sultan Balban’s two invasions of Ranthambhor were definite failures. The next ruler Jaitrasimha and his son Hammira continued strengthening their army. They had now raised a compact force of cavalry to plunder the neighboring kingdoms and thus accumulate more wealth and resources. With these actions, the Chauhans of Ranthambhor repulsed several Turk invasions, increased the size of their kingdom, and became a major thorn in the side of the Delhi Sultanate.

Further south the other Chauhan princes had felt the weight of the invaders’ army. They had allied with the Chaulukyas of Gujarat to repel the Turks, and though severely weakened, had managed to preserve their independence. Here too the manner of fighting of their kinsmen at Tarain, and the stout defense of Ranthambhor, left a deep impression on the minds of these Rajaputra families. They too began making changes to their fortifications, the composition of their armies, and the manner of cavalry warfare to match the Turks blow for blow.

The future battles of these kingdoms with the Turks have been described here. What was common in all these conflicts at the end was the immolation on a massive funeral pyre of the warrior families, the destruction of all their wealth, and the final death ride of the warriors into the heart of the enemy forces. They were determined to prevent their capture and conversion to Islam . In addition, these Rajaputras now instituted certain rules to preserve the purity and independence of their ancestral culture. All those who converted to Islam were expelled from society and were deprived of their clan identity—this deterred the Turks from gaining any new converts. The fanatical force of Islam was met by the immovable object of a solid and vigorous Hindu society.

The valiant defence by these Rajaputra families and their refusal to submit and convert to an alien creed placed the word Rajput (modified through repeated use of Rajaputra) at the forefront of North Indian society—it practically replaced the word Kshatriya. This will be explained at length in later posts.

The lessons of the battles at Tarain were also learnt quickly by the Rajputs. The only way to defeat the mobile archery-wielding Turk cavalry was to ride into them at full gallop. This deprived the Turks of the room to maneuver and shoot arrows from long range, as was illustrated so clearly in the first Battle of Tarain . The tumultuous charge on horseback remained the proud preserve of the Rajputs till the 18th Century—this was wrongly attributed to their “reckless bravery” in later times. From the Tarain example, it is clear that the Rajputs wished to fight the Turks on terms that were advantageous to them, which was a contest of sword-against-sword in a packed field—the heavily-armored Turks would be unable to ply their swords with the same energy and ferocity as the Rajputs.

The use of elephants also changed. Previously a large corps of elephants formed the center of the Hindu armies, while the cavalry manned the wings. But now the number of elephants was reduced and placed in the vanguard, in the manner of the Turks. These elephants would be sent ahead to create gaps in the enemy formations—the main body of cavalry would then come charging through and complete the rout of the enemy.

The Rajputs, in addition, adapted to the use of catapults and ballistae of the Turks along with the changed construction of their forts. It is suggested that when Iltutmish took Ranthambhor he left it to be garrisoned jointly by the Turks and some of the Chauhan soldiers. Later when Vagbhatta besieged it the Rajputs inside the fort threw their Turk comrades over the walls and opened the gate for the son of their former King. The new techniques in building forts would have been learned by these Rajputs at this time.

The next post will conclude this story by examining the Rajaputras of Kannauj.

1 Like
Language Development and History, Part II
The Chauhan Clan of Rajputs: Destroying the Myths