The Kangra Fort and Mahmud Ghaznavi

After winning the Battle of Ohind in 1008 CE, Mahmud is said to have chased the army of Shahi Anandpal to the fort of Bhimnagar. After a siege of only three days the people in the fort opened the gates and surrendered to Mahmud—an incredible amount of wealth, from the Shahi treasury, was taken away to Ghazni. The Shahis later shifted their capital south to Nandan, in the Salt Range.

Bhimnagar was probably founded by Shahi Bhimdeva, the grandson of Kallar, and the ancestor of Anandpal. Al-Utbi describes it as, “ the fort called Bhimnagar, which is very strong, situated on the promontory of a lofty hill, amid impassable waters .” Bhimnagar would have been located close to the capital Ohind since the army defeated at that latter place took shelter in this fort—Anandpal though did not stop to make a stand at that strong fort, suggesting that the garrison was either inadequate or had been pulled out to fight the Battle of Ohind.

Instead of chasing after him, Mahmud invested the fort, probably because it contained the Shahi treasury. Since the defenses could not be prepared in time by the refugees from the battle, Bhimnagar surrendered within three days to the Turks. Mahmud left one of his officers to garrison the fort—subsequently, the name Bhimnagar does not appear in any history, implying that the fort was renamed by the victors.

The historian Fersihta, writing in the 17th Century, suggested that Bhimnagar was actually Nagarkot—better known as Kangra Fort in Himachal Pradesh. His version was accepted by colonial historians since the geographical description of Bhimnagar is similar to Kangra, which is built on a hill on the confluence of the Manjhi and Banganga Rivers. However, since Kangra is located hundreds of miles from Ohind, a defeated army could not have outpaced the Turk cavalry for such a long distance to take shelter in that fort? And moreover, as is clear from the Rajatarangini and contemporary inscriptions, Kangra, Jammu, and Jalandhar were all independent of the Shahi Kingdom—it would be highly unlikely for the Shahi army to abandon all the forts of their kingdom to take shelter in a fort of another kingdom.

Even if we assume that the Shahi army did not have any confidence in its forts, or that its soldiers were unconcerned about the fate of their families and homes, why would they flee to such a faraway place like Kangra? When we have seen that after losing their second capital of Nandan the Shahi kings eventually sought refuge in nearby Kashmir rather than Kangra, which was too distant from their base.

Al-Beruni is a more reliable authority since he began writing only a few days after Mahmud’s death and had an opportunity of exploring all the newly conquered territory—it will be clear from his writing what places were under the direct control of the invaders. More importantly, he uses the accurate name Nagarkot for the Kangra Fort. In his monumental work[1] on Indian religion, society, science, and geography, Al-Beruni mentions Nagarkot twice. First, he describes some of the rivers of India, “ The river Biyˆah [2] flows east of Multˆan, and joins afterward the Biyatta [3] and Candarˆaha [4]. The river Irˆava* [5] is joined by the river Kaj, which rises in Nagarkot in the mountains of Bhˆatul. Thereupon follows as the fifth, the river Shatladar* [6].” This appears to be a mistake since the rivers rising in Nagarkot go on to join the Beas and not the Ravi River.

At another place he gives a more detailed description, “ The Hindus had kings residing in Kabul, Turks who were said to be of Tibetan origin…Unfortunately, the Hindus do not pay much attention to the historical order of things, they are very careless in relating the chronological succession of their kings… I have been told that the pedigree of this royal family, written on silk, exists in the fortress Nagarkot, and I much desired to make myself acquainted with it, but the thing was impossible for various reasons .”

Al-Beruni is talking of the pedigree ( vanshavali ) of the foreign rulers of Kabul and is castigating the Hindus for not maintaining the chronology of their rule—but he is told by them that this document, written on silk, is present in Nagarkot. Now if this fort had been conquered and garrisoned by the Turks under Mahmud, all articles would have been already carried away to Ghazni. More importantly, Al-Beruni should have not found it “impossible” to travel to a place under direct Muslim control…as he states in his book only places under Hindu rule were closed to a mleccha like him. Lastly, Al-Beruni does not use the name Bhimnagar that had been used by Mahmud’s secretary Al-Utbi—that place seems to have declined in importance along with Ohind and Nandan.

At another place he mentions Jalandhar as an independent kingdom with its capital Dhamal (modern Dhameri) at the foot of the mountains—the implication is that Nagarkot, lying deeper in those same mountains was also independent. This also confirms the statements of the Rajatarangini and the contemporary Chamba inscriptions. And from Muslim texts, it appears that Jalandhar, which was on the plains, was conquered by Ibrahim Ghaznavi more than half a century later.

Returning to Ferishta, he also states that Mahmud carried away the great idol of Nagarkot to Ghazni—and that in 1043 the Indian princes recovered Hansi, Thanesar, and Nagarkot from the Muslims and introduced an exact copy of the older idol at the last place. There seems to be some confusion in this statement since Mahmud did not take any idol from Nagarkot, but he carried away the idol of Thanesar, which is also confirmed by Al-Beruni:

“ The city of Tˆaneshar is highly venerated by the Hindus. The idol of that place is called Cakrasvˆamin, i.e. the owner of the cakra, a weapon which we have already described. It is of bronze and is nearly the size of a man. It is now lying in the hippodrome in Ghazna, together with the Lord of Somanˆath …”

Al-Beruni also mentions the other great idols of North India but that of Nagarkot is not in the list—it appears that Kangra was not so important as a place of pilgrimage at that time. While in the time when Ferishta wrote his history, Kangra (both the Goddesses Vrajeshwari and Jwalamukhi) had become one of the leading pilgrimage centers for North Indians. Thanesar, on the other hand, was then only a small town under direct Muslim rule and Ferishta naturally confused the ancient idol and pilgrimage center of Thanesar with the latter-day Kangra—and it is for this reason that he also substituted Bhimnagar with Nagarkot.

So from the military point of view, and the evidence provided in Al-Beruni’s work, Bhimnagar must have been a Shahi fort located on a hill near the innumerable streams between the Indus and Jhelum or somewhere on the Salt Range. It is also clear that Kangra was not conquered by the invaders until 1621 when the Mughal Empire under Jahangir captured it after a siege of more than one year. In his Tuzuk-i-Jahangiri the Emperor remarks:

“ Kangra is an ancient fort to the north of Lahore…from the time that the voice of Islam and the sound of the established religion of Muhammad reached Hindustan, not one of the Sultans of lofty dignity has obtained victory over it .”

In Kangra itself, there is no tradition of the fort ever being called “Bhimnagar”. The most popular names for the fort were Nagarkot, Kot Kangra, and Susarmapura[7], while the surrounding country was alternatively called Trigarta
[8], Katoch[9], and Kangra. While the independence of the Kangra Rajas is evident from contemporary literature and inscriptions, their power emerged with Raja Prithvi Chandra who issued coins for his people in the 14th Century, and which were continued down to the reign of Maharaja Sansar Chandra II in the 19th Century. 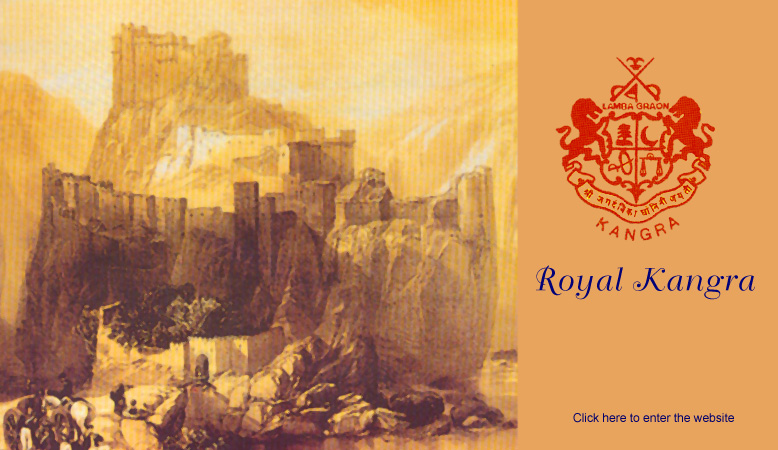 A 17th Century Lithograph of the Kangra Fort from the website run by the descendants of the Kangra Royal Family. The fort today is not so impressive since it suffered extensive damage in the 1905 Kangra earthquake…several bastions that had defied the might of invaders were brought crashing down.

Credits: As posted on Military History of India blog, by Airavat Singh