The tower was constructed by the Mewar king, Rana Kumbha, to commemorate his victory over the combined Turk armies of Malwa and Gujarat.
Maharana Kumbha ascended the throne of Mewar in A.D. 1433, in the renowned fortress of Chittor and ruled till A.D. 1468.

This magnificent tower was built by Maharana Kumbha in AD 1448. Dedicated to Lord Vishnu, the tower is 37.19 m high and is divided into nine storeys. An inscription in the uppermost storey giving a detailed chronological account of life and achievements of rulers of Chittaur was taken up by Rana Kumbha’s court scholar Atri and was later completed by his son Mahesh. One can reach up to the top storey through an internally arranged flight of steps. The names of the architect of this tower, Sutradhar Jaita along with his three sons Napa, Puja and Poma are also inscribed in the fifth storey. 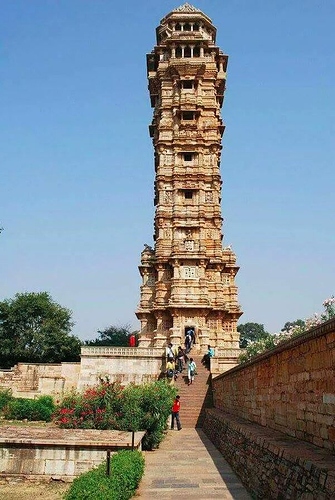