Who was Udaybhan Rathore Really? An analysis of the myth making in Maratha history

An article on Udaybhan Rathore, who he was and how over the time period, his life was portrayed in Maratha chronicles and pseudo history.

Udaybhan Rathore was the head of Bhinai thikana (84 villages) in Ajmer. He was the direct descendant of the famous Rao Chandrasen Rathore, Raja of Marwar(4th generation) who resisted Akbar all his life and never made any alliance with Mughals like Maharana Pratap.

Later in 1783, the Maharaja of Jodhpur gave the title of Raja to the Bhinai family for their military service. The Bhinai family and their direct descendant Raja Sh Mayuraj Singh still lives in Ajmer. Anyway coming to Udaybhan Rathore and the story of Tanaji.

Jai Singh’s march on Shivaji and the treaty of Purandar (1665) is a well-known episode to repeat here. After getting the hill forts from Shivaji under the treaty, Jai Singh didn’t have enough manpower to man every one of the small forts because of his next campaign against Bijapur. Jai Singh personally took over a couple of important forts like Kondhana (Sinhgarh), Purandar etc. Others were given to some Mughals or their fortification walls destroyed. Jai Singh died in 1667 near Burhanpur while en route to the north.

The fort of Kondhana was under Udaybhan Rathore placed by Jai Singh not sent specially by Aurangzeb as shown in the movie. In 1670 the fort was captured by Marathas after a sanguinary fight in which the Maratha army leader Tanaji Malusare and Udaybhan Rathore both died.

The reality was simple, Marathas under Tanaji captured the fort from Udaybhan Rathore but as we will see, slowly this story expanded to one of the biggest fiction in Maratha history.

The first mention of this fight is in Sabhasad bakhar written almost 30 years after the battle. The Sinhgadh campaign is given in detail, that there was one Tanaji malusure who commanded the army. Although this battle is described in detail, there was no exaggeration about Udaybhan which were made later. Udaybhan was only mentioned as a great warrior who was the commander of the Kondhana fort. And that Tanaji climbed the fort with help of mawle soldiers who were expert in mountain climbing.**

Even Chitnis Bakhar which was written about 130 years later doesn’t say anything wrong about Udaybhan. The event is also mentioned vividly by British historian Grant Duff’s in his ‘History of Mahrathas’ written in 1826, the story is the same as Sabhasad bakhar. Nothing wrong against Udaybhan here too.

Later in British period this story is deformed to another level.

In 19th century one powada was composed allegedly by one Tulsidas shahir.

The powadas are ballads; songs are sung by wandering performers, there is nothing historical about it.

In this powada ‘Udaybhan’ is made a monster, some description about Udaybhan is as follows, Udaybhan eats one cow, one goat and more than a maund of rice in ONE MEAL. He has 18 wives and 12 sons (which is also fake as he had only one son and which wasnt in kondhana). He remains drunk and doesn’t go to fight until all his fake 12 sons get killed. The cherry on the top, it is shown that he also converted to Islam, goes to mosque and when he died he cried “Allah”. In the ballad there are many other unbelievable things like how a ghorpad (monitor lizard) helps Tanaji to climb up the fort which was not true according to Sabhasad Bakhar, and like how ghorpad stopped climbing midway and then Tanaji asked her to climb but when she doesnt, Tanaji threatens her that he will cook her and will eat her if she doesn’t climb. Then the ghorpad again starts climbing. HG Rawlinson who wrote ‘shivaji the maratha’ added an English translation of the powada, he himself says that there is no contemporary evidence of this story.

There are many other geographical mistakes too like how Rajgarh is confused with Raigarh by the composer. Although the story has little historic value, the story being interesting was copied by some colonial and Pune writers.

Later comes a man named Hari Narayan Apte, a historical novel writer who is hailed as Walter Scott of Marathi literature. He wrote in 1903 a novel named Gad aala pan sinh gela. He also wrote a novel named “Tiger of Mysore” on Tipu Sultan. He went a step further from Powadas and added in this an extra story of Kamal Kumari. And also made Udaybhan rathore an illegitimate son of Mewar Rana from a slave girl. And how did the illegitimate son of a Sisodia Rajput adopted Rathore surname is a mystery that Apte didn’t think over.

Anyway in his story, Udaybhan kidnapped Kamal Kumari, a Rajput widow against her wishes, she wanted to become Sati. Udaybhan is shown in much disgust in this book. Finally, a man of honour Tanaji frees Kamal Kumari from Udaybhan’s clutches so she can commit sati. This book of Apte gained quite a popularity and became an anchor point for further writings on Udaybhan and Tanaji. Many works on this were composed later, to name a few Acharya Chatursen a Hindi novel writer’s book “Sayadri ki Chattane” follows the same story of Udaybhan.

There were Marathi films made on this story before independence. And finally a Hindi film Tanhaji in 2020 by a Marathi filmmaker Om Raut 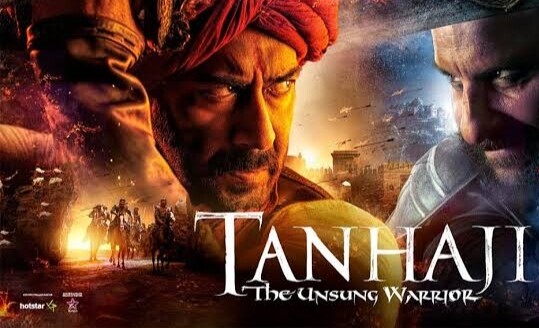 This film is on another level, it takes all the story from these fictions but remove all those impossibles like eating cows and all to make the story believable and also specifically mentions that Udaybhan is Rajput which was removed by the censor board.

He shows Aurangzeb as a simple guy weaving caps but made Udaybhan the vilest guy you could imagine, there was also a scene of Udaybhan killing his own mother because she was “neecha khoon”.

all this was removed by the censor board, not by the filmmaker. This is how the character of Udaybhan was ridiculed beyond any imagination by the slow process of fictional myth-making.

The truth is much simpler, that Udaybhan was a mere soldier and was appointed by Jai Singh and was doing his duty. For siding with Mughals, even Shivaji attacked many forts while serving under Mughals. Shivaji’s son Shambhaji also served under Mughals. Shivaji’s father Shahji also served under Mughals, Bijapur and Ahmadnagar Sultans as it suited him. But looks like Udaybhan got on the wrong side of Maratha myth-making. Finally, I expect at least descendants of Udaybhan in Bhinai and Badanwara would raise some awareness on this.

Read about Some dialogues in the Tanaji movie, the 1st change in the list of changes made by the censor board. This is at 1hr 26 min in the movie where Kamal’s brother tells the story of Kamal and Udaybhan’s past to captured Tanaji. 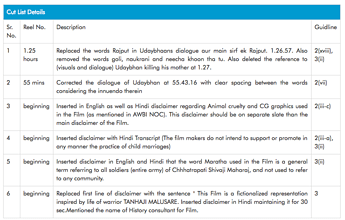 This is a thread on Udaybhan Rathore posted by @Engr_Who on Twitter.

I am attaching below the screenshot of his genealogy as per Marathi Sources. As Posted by @Engr_Who on Twitter 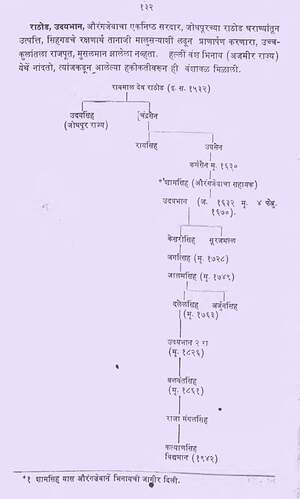