In the first article of the the series, we weighed Shahane’s narrative where we ran a Fact check on it and found it to be a mischievous propaganda. In this part of the series, we evaluate his article to see if it has any useful scholarly value. The article under discusson can be read here.

We accuse Girish Shahane not just for ethical reasons (like running a hate-campaign)* but also accuse him of abusing history. He makes sweeping statements against an ethnic group but fails to back it up with references like a true pamphleteer.

Girish Shahane, the Marathi brahmin, makes up for his lack of references by throwing around casual remarks casually.

1. Starting with the most cliched caption of the bots at Scroll.in “They were defeated by Ghazni, Ghuri, Khilji, Babur, Akbar, the Marathas and the British”. 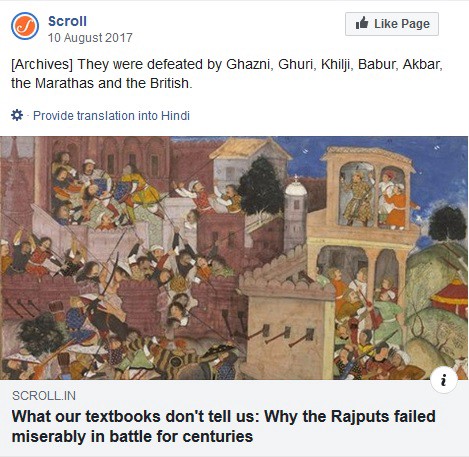 The Internet is cluttered with essays that start with this rhetorical question “Why were Rajputs defeated by Turks etc?” followed by make-wish reasoning and theories of “disunity, avarice , weakness etc”. Immediately after Independence,Brahmin ideologues in the Right and the Left, used this technique to target and alienate Rajput public from national discourse, and with time this was normalized to imprison the rajput public in its alleged past
Rather the question must be “How did an ethnic group precariously situated in North & West sustain a period of at least 1500 years that included wars with Arabs, Turks, and Mughals even as their Hindu contemporaries elsewhere couldn’t ?” Military acumen with political pragmatism.

Well ensconced in the comforts of Deccan, the clans renowned as Marathas today didn’t even get to face Ghazni or Ghuri and when Khilji invaded Deogiri, the Seuna rule over Deccan ceased to exist by 1317 and another Maratha power couldn’t rise until Shivaji four centuries later. Allauddin’s invasion of Warangal, led to defeat of Kakatiyas in 1310 and they ceased to exist by 1323 ceased. Koh-i-Noor, possibly mined in Kollur, changed its ownership from Prataprudra Kakatiya to Allaudin Khilji. Hoysalas ceased to exist by 1343 while the Pandyan Empire was reduced to Tenkasi.
On the other hand, the Rajputs with their republican clan-kinship base bounced back - Guhilots not just captured Chittor but enlarged Mewar, Kacchapghatas of Dhundhar revived in region adjoining Delhi revived, Tomars of Chambal captured Gwalior by 1394. Similar was the case with Bhadauriyas of Braj or other Rajput colonies in Western UP and Rohillkhand. To understand how the republican tribal system helped Rajputs sustain, read this paper by Prof M S Ahluwalia published in Indian History Congress Vol. 28 (1966).

2. Shahane “Having been confined to an arid part of the subcontinent by the early Sultans”

One wonders what happened to the Rajputs of Western UP, Braj, Rohillkhand, Awadh, Purvanchal, Malwa, Saurashtra, Garhwal, Kumaon, Himachal, Punjab or Jammu. We request him to study what clans constitute the ethnonym; the demographic presence of Rajputs prior to Turkic Rule and during it - the inter-regional migrations of Rajput sublineages across North India - from West to East and East to West.

Note: One mustn’t write when on weed. Manish Sisodia is from Hapur (west UP), Chandrashekhar was a Solanki from Ballia, VP Singh was a Gahadavala from Allahabad Hint: check the 1931 caste-census.

This label pasted on such a huge community is amusing because it invokes many questions.

Q) If any Frontier community, a mixture of tribal republics and semi-feudal states, were “specialists in failure”, how it survived despite greater geographical proximity to the turbulent Northwest and the Imperial Delhi, when wealthier and more organized powers like Senas of Bengal, or the Kakatiyas of South vanished without trace due to Turkic onslaught. Q) If Rajputs were “specialists in failure” what made non-Rajput Kings like Jaunpur Sultans, Malwa Sultans, Sher Shah, Sikh ruler Ranjit Singh, Maratha States and even British employ them? Q) Are we to believe that Rajputs, ranging from Marwar’s cavalrymen to Purvanchal’s Purbia infantrymen and Pahadi soldiers like Zorawar Kahluria, were all “specialists in defeat” just because of the “ethnonym” itself? Maybe, the community

No doubt, just as their Afghan neighbors to the west, the various clans of Punjab and Rajasthan collectively dubbed “Rajput” were oblivious to the idea of Central-Asian artillery when it was first introduced. And this remains equally true of all the Indian Monarchs, be it Marathi Warlords or the Emperors in the south.

Apart from not citing references , distorting demography & ruining geography of rajputs and then making up with tons of casual, snide remarks, he then turns to abuse History and further fabrications.

The hyperlink embedded mentions the legend of Padmavat. His simplistic remark contradicts Ramya Sreenivasan’s “ The Many Lives of a Rajput Queen: Heroic Pasts in India, c. 1500–1900”, a left-liberal writer.

Truth: The first legend of Padmavat was written by Malik Muhammad Jaysi in Awadh in 1540, not a “bard” in “Rajputana”. The first Rajasthani account Gora Badal Padmini Chaupai was in 1589 by Acharya Hemratan Suri, a Jain monk in Mewar, also not a “bard”. While Jaysi’s account was Sufi folklore, Suri’s account was to glorify the idea of a dutiful soldier just as the name suggests (Gora and Badal were the two Rajput soldiers), again not to “explain away past debacles”. With its mass publication from Lahore to Arakan, centuries of retelling and later Bengali adaptations, it became an established memory.

Shahane drives home the argument that both Prithviraj Chauhan II & Guhilot Sanga were “specialists in failure”. Hence as per him, Sanga suddenly rose out of nowhere, fought at Khanwa and was roundly defeated. So what made Babur, a descendant of Emperor Timur, feel “unnerved” on the eve of the battle at Khanwa with a one-eyed handicapped man, with no illustrious Imperial pedigree unlike himself, if that man was just some “specialist in failure”.

In 1514, Sanga defeated the opposite claimant of Idar placing his favorite at the First Battle of Idar. He was not a belligerent in the Second Battle of Idar; in 1517 in the third battle of Idar, he defeated Muzaffar Shah II of Gujarat Sultanate[Hooja, Rima; A History of Rajasthan, p-527].
3. Pratap Singh: How Shahane & his team sold a Narrative that even contradicted leftist Historian Satish Chandra?

(a) Shahane’s words “ Man Singh, a Rajput who had accepted Akbar’s suzerainty and adopted the Turko-Mongol battle plan led the Mughal troops.”

Satish Chandra doesn’t mention any superior Turko-Mongol battle plan. This is what he writes “ The battle of Haldighati (18.02.1576) was fought in the most traditional manner. ” This was so because neither of the armies could bring artillery through the passes. [History of Medieval India; pg 121–122]. Its not even worth retyping it again - please read about both the 26 year old Chauhan Emperor & the Guhilot ruler from the previous article of this series and judge for yourself if the epithet suits them.

(b) Shahane’s words “ What’s astonishing is that centuries of being out-thought and out-maneuvered had no impact on the Rajput approach to war. Rana Pratap used precisely the same full-frontal attack at Haldighati in 1576 that had failed so often before. ”

On the contrary, Pratap proved to be a man of tactics because Satish Chandra writes “Early in 1576, Akbar moved to Ajmer and deputed Man Singh with a force of 5000 Rajputs and Mughals, in response the Rana had devasted the entire region up to Chittor so that Mughal forces couldn’t get any food or shelter”. Satish Chandra mentions “The impetuosity of their (Mewar forces) attack led to the crumbling of the Mughal left and right wings and put serious pressure on the center till Mughal reserves arrived” He continues “The fear of ambush in the hills prevented pursuit, and enabled the Rana to retreat into the hills in order to continue the fight. Thus, the battle failed to break the existing stalemate ”. Post-1585, he re-occupied the lost territories.

He continues “ Though Pratap’s continued rebellion following his ‘defeat at Haldighati was admirable in many ways, he was never anything more than an annoyance to the Mughal army.

This is betrayed by the fact that Satish Chandra mentions that after Pratap’s death in 1597 “a series of expeditions were sent by Akbar against Amar Singh (Pratap’s son) between 1598 and 1605. Prince Salim was sent against the Amar Singhji in 1599 but achieved little. He was again deputed in 1603. Successive campaigns were led by Prince Parvez, Mahabat Khan, and Abdullah Khan but couldn’t make any impression on the Rana (Amar Singh)”. It was only in 1613, that a large army under Prince Khurram invaded and after two years of a struggle, a peace was negotiated in 1615. Surely, if the people of Mewar were mere nuisance, the Emperor would have let them be - rather they were seen as an impediment to Mughal consolidation in the North, quite evident as Mewar began to symbolize “local sovereignty” even for Shivaji a century later.(D.R. Mandekar, Mewar Saga; pp. 72-73).

The article seemed to only mainstream the prejudiced gossip of Marathi brahmins & Marathas about the Rajput people, hitherto restricted to their private circles.

Written in a simple pamphleteer style - to mobilize public opinion against the country’s Rajput community, it is meant for a readership that doesn’t care to cross-check.

While the article brims with sweeping labels and cheesy statements (eg. linking the ethnic group to opium), it shows no sign of references.
However at other places (like in this article) the writer quotes Turkic rivals’ verbatim to bash the Rajputs as if the Turks would be more objective about their Indian enemies than the Nazis were about the Russians.

This article is a paradigm of how “liberal journalism” has deteriorated wherein truth is often replaced with sensationalism and facts by narratives — even as few powerful men and women have temporal laugh at the cost of the masses (who are alienated).
Hence, we humbly suggest that this article must be archived as a Case Study on yellow journalism in “mainstream” digital media.

Lastly, we shall discuss the story behind this Narrative, the Groups involved and how it reflects sociopolitical alienation of the Rajput community in the next & final article on the topic.

While I appreciate the great effort to point out errors and poor quality of the research and generalizations with facts and figures. I do disagree with the characterization that the piece in question is “liberal journalism”. There is good journalism and there is bad journalism. There is no such thing as "liberal’ vs. “conservative” journalism or some such dichotomy. Unfortunately, Liberalism has a pejorative meaning for some. In fact, it is hard to argue against Liberalism for it is a political and moral philosophy based on liberty, consent of the governed and equality before the law. It must be said, however, Liberalism like other political doctrines, liberalism is highly sensitive to time and circumstance. Each country’s liberalism is different, and it evolves in each generation. I should add, given the aforementioned, India is, so far, a Liberal democracy. The media needs to up its game and investigate before reporting. The sad fact is advertising revenues from political parties is corroding the free press in India and Girish Shahane is a symptom of that corrosion.

. I do disagree with the characterization that the piece in question is “liberal journalism”. There is good journalism and there is bad journalism. There is no such thing as "liberal’ vs. “conservative” journalism or some such dichotomy. Unfortunately, Liberalism has a pejorative meaning for some. In fact, it is hard to argue against Liberalism for it is a political and moral philosophy based on liberty, consent of the governed and equality before the law. It must be said, however, Liberalism like other political doctrines, liberalism is highly sensitive to time and circumstance.

Agreed sir, in fact that is exactly the reason why I had put that in between inverted commas to point out contradictions. One doesn’t run a communal-campaign against any community & still get to be call a “liberal” . Yes it is bad journalism (& not liberal or conservative) ; however the discourse among India’s liberal (allegedly) journalists (as against rightwing ones) sees the community as bête noire — liberalism like all such lofty terms such as secularism or even nationalism have come to be used quite lamely in the actual world.