Politico-military impact of the Foreign Powers

When referring to the impact of the Bactrians, Sakas, and Kushans on northwest India, it is customary to talk of coinage, iconography, and clothing. Even though these are secondary and superficial in nature, such influence was used by the colonial and leftist historians to claim foreign origin for the Indian clans and communities that emerged in the region centuries later. How this superficial evidence was used, or twisted, will be seen when the Indian clans that fought the foreigners are studied later.

For now, we need to look at the more important exchange of military methods and political structure, between the Indians and foreigners, in that age. In the interest of keeping blog posts of a reasonable length, the detailed military campaigns of the foreign powers have been described separately:

After reading through these articles you will note that they contain practically no military information! Nothing about weapons, the various formations of their armies, or their military strategies. In fact, there is no detailed description of even a single battle fought by these foreigners! As for the campaigns, only a bare outline is presented, and even that may not be wholly accurate.

The reason is that there is no written history of these foreign powers and even basic information on their kingdoms has to be reconstructed on the basis of their coins, inscriptions, and iconography.

Consider the campaigns associated with Kanishka. Since his earliest inscriptions are to be found in western UP, it is assumed that he was a governor of that region, that he collected wealth by raiding the eastern kingdoms, and fought the other Kushans on the strength of that wealth. This is all a guesstimate. His campaign in the Kushan heartland of Kabul, Bactria, Central Asia, etc is suggested by logic, but no actual evidence is available. The same is the case with the campaign against the Saka Kshatraps and the Indian Kingdoms of the west.

That being said, these articles provide a convenient background, against which military information gleaned from the same coins, inscriptions, and icons can be tallied. There are some obscure references to the militaries of these powers in Chinese and Greek texts, which will be described here.

The Indo-Greeks had the legacy of Alexander’s army on the one hand and the fact of the Maurya Empire’s domination, which resonated in West and Central Asia, on the other. Hence the Indo-Greek military formations were not very different from those of their Indian opponents, comprising infantry, cavalry, and elephants.

The use of chariots was on the decline, being replaced by cavalry bearing lancers, since horses were more maneuverable than clumsy chariots. Chariots were no longer counted in the armies of the small Indian kingdoms of the northwest, which faced the foreign invaders. However the mighty Mauryan army wielded units of infantry, elephants, chariots, and cavalry——a practice continued by the empires that followed in the east. The use of chariots does not appear to have affected the battles fought between the foreigners and the Indian empires. In fact, they were only very gradually phased out from the eastern armies, being found in the armies of the Palas of Bengal in as late a period as the 8th Century CE [1]

Elephants in those days were also found in western Punjab and the mountain tracts of Gandhar. But their quality and quantity would’ve been inferior to those magnificent elephants found in the moist jungles of the Sunga Empire. This is why, after initial success against the smaller Indian kingdoms, the Yavans were defeated by the Sunga Empire. The Sakas and Kushans, particularly the latter, used elephant units in their armies. The Greek writer Philostratus, describing events in the 1st Century CE in the Kushan dominions, states, "…when they came to the Indus, they saw a herd of elephants crossing the river, and they say that they heard this account of the animals. Some of them are marsh elephants, others again mountain elephants, and there is also a third kind that belongs to the plain, and they are captured for use in war. For indeed they go into battle, saddled with towers big enough to accommodate ten or fifteen Indians all at once; and from these towers, the Indians shoot their bows and hurl their Javelins, just as if they were taking aim from gate towers. And the animal itself regards his trunk as a hand and uses it to hurl weapons ."

The Kushan ruler Huvishka depicted on an elephant with a trident in one hand and an elephant goad in the other.

The case with horses was exactly the opposite. The native Indian Horse in ancient times was small and lean and was ideal for pulling chariots, which is why the Rig Veda claims the horses of the Saraswati region (north Rajasthan) as the best. But for the cavalry in this new age, the tall horses of the foreigners were indispensable…they had to be imported from regions like Iran, Afghanistan, and Bactria. This put the small Indian Kingdoms in the northwest at a disadvantage. Only the empires and larger powers could afford the cost of annually importing such horses in sufficient numbers. 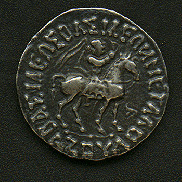 A coin of the Saka ruler Azes mounted on a horse and bearing a lance.

This partly explains the sweeping victories of the foreign armies in the politically fractured northwest India. However, Indian clans in Rajasthan adapted to the changes by making the best use of the native horse breeds——in this regard see the parallel case of the latter-day Rajputs against the Turk invaders.

The Sakas and Kushans traditionally used horse-archery in their native lands…the bows and arrows that they used were much smaller than those used by Indian archers. The Chinese author Shih Chih states, " The great Yueh-chih is a nomadic state: they move about, following their cattle, and they have the same customs as the Hsiung-nu. There are about 100,000 or 200,000 archers. Formerly they were strong and treated the Hsiung-nu with contempt ."

Moreover, the only region of India with the vast open plain similar to Central Asia, uninterrupted by hills, thick forests, cities, or numerous villages, is north Rajasthan. So while the colonial/leftist historians claim some Rajput clans to be descendants of the Saka-Kushans, it is striking that the Rajputs used only lances and swords from horseback, in the manner of their ancestors . Horse-archery was the preserve of their enemies, the latter-day Turk invaders, who came from the same Central Asian region as the Sakas and Kushans.

The Indian longbow thus went out of general use and was later found only in martial arts schools and as literally described in the Indian texts.

As we all know animals used in warfare perform the equally important role of logistics and troop transport. This is the case with horses, bulls, elephants, and for the first time is noticed with camels. The twin humped camel found in Central Asia is depicted on the coins of the Kushans.

Camels were not included in the armies of the eastern Indian empires, for obvious reasons, but were counted in the western empires of the latter-day Pratihar Rajputs (8th Century CE). The Rajputs of western Rajasthan maintained camel units in their armies till late in the 19th Century (see the Bikaner Camel Corps). Camels were also used by the Muslim Turks who invaded India and fought these Rajputs——so it is possible that camels in warfare was a case of independent use by both Indians and foreigners without influencing each other. 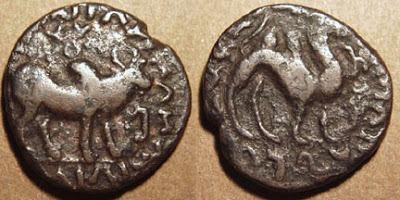 Kushan coin portraying a bull and a twin-humped camel.

The Kushan Empire had the luxury of using all these different elements in various parts of their vast empire. Writing of a campaign of Kanishka against the Chinese, the author Chi-Chia-yeh (470 CE) states, " He first sent out barbarians with the white elephants as a vanguard to lead the way and the king advanced from behind. When they were about to reach the Ts’ung ling and went over a steep pass, the elephants and horses of the vanguard were unwilling to advance ." 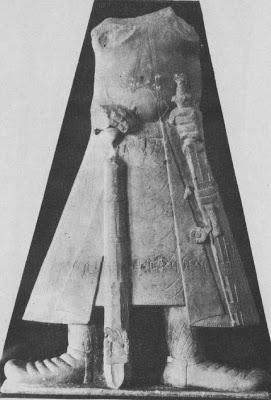 Statue of Kanishka holding a sword. The Indian clans had their own types of swords, daggers, spears, which may have been adopted by the foreigners. So the Indians and foreigners influenced and learned from each other in the military field and in weaponry.

The Saka-Kushans, even though ruling a much smaller area than the mighty Maurya Empire, started using very high-sounding royal titles. The Mauryas, lords of a 600,000 man army, the sounds of whose conches echoed across the Indian continent and beyond, were content with the title of Raja (King). The foreigners adopted this royal Indian title and added superfluous prefixes like Adhiraja (Lord of Kings) and Maharaja (Great King). This practice became a fashion with the Indian clans that resisted or submitted to these foreigners and spread further into India by diffusion.

The Gupta Emperors took it further, terming themselves Maharajadhiraja (Great King of Kings) as well as Parambhattarak (Supreme General) and Paramdaivta (Supreme God).

The foreigners also adopted the practice of religious toleration from the Indian kings. Each foreign king could practice his own faith privately but had to display public acknowledgment of the religious diversity in his lands. In the case of the Kushans, Kanishka probably practiced the Buddhist faith, Huvishka was a Shaiv, while Vasudeva was probably a Vaishnav.

One interesting feature of the foreign polity was the system of joint rule. It is a worldwide practice to train the next generation of royalty by assigning them to govern the provinces. The Maurya Emperor Ashok as Raja was assisted by his brother who was titled Uparaja (deputy King) and his son titled Yuvaraja (young King). With the Gupta Emperors, the sons were given the high-sounding title of Maharajaputra Devabhattarak , the former being a precursor to the development of the term Rajput.

But with the Sakas and Kushans (and even the Bactrians) such joint rulers were not always members of the royal family but just generals or important tribal leaders. The case of Kanishka is illustrative. The Mahakshatraps had their deputy Kshatraps , who led their own separate army and could even strike their own coins! Such deputies could always be a threat to the stability of the foreign rule and the contemporary Indian texts state that the foreigners, while killing civilians in their invasions, also slaughtered each other in bloody internecine struggles.

Thankfully this practice of joint rule was not adopted by any of the Indian clans or kingdoms.

However, it contained the seeds of the dubious system of feudalism. The foreigners, while campaigning in the politically fragmented northwest India, chose to extract tribute from the Indian clans while leaving them to rule their territories. A very practical system but a big change from the super-centralized Maurya Empire. These clans would lead their armies to join the campaigns of the foreigners but were also free to make war on their neighbors as and when they chose. This system also left them free to declare independence or withhold tribute at any moment their masters showed some signs of weakness.

Even the clans that resisted the foreigners developed a condition of “small-state mindedness”, in other words, the clan’s loyalty lay with its own kingdom. Their sole purpose was to free their own piece of land from foreign rule, without regard to what happened elsewhere. Although there are assumed cases of clans forming united fronts against the foreigners, the actual evidence is lacking. No Chandragupta emerged to unite the warrior clans and lead them on the second war of liberation.

Even the Gupta Empire was not able to change this system with regard to its relations with the Indian warrior clans in western India.

Such small-state mindedness (miscalled feudalism) became a hallmark of this northwestern region। Its influence also spread in parts of northern India and continued in existence till modern times.