The Prithviraj Vijay is a contemporary account of the 12th century the Kingdom of Ajmer ruled by the Chauhan clan. In 1192 outlying portions of the kingdom fell to invading Turks, and the capital Ajmer later in 1195, but other parts under the Chauhan Rajaputras continued to resist the invaders for more than a century. The text helps to dispel many myths from that period, that have developed in later writings, for example, the establishment of a Sufi shrine in Ajmer. Mythological accounts of Khwaja Moinuddin Chishti state that he came to Ajmer and had conflicts with its ruler and people prior to the Turk conquest. But the author of the Prithviraj Vijay, who lived at the court of Ajmer from as far back as 1178, does not know of any such Sufi saint, much less of his “conflict” with the powerful ruler!

This blog post shall describe only the political and military details provided in the manuscript; the wealth and splendor in the Prithviraj Vijay is described elsewhere. Since the manuscript is in Sanskrit, the title should be phonetically spelled Prithviraja Vijaya, with a ‘short a’ at the end of both words for emphasis.

The manuscript, written on birch-bark, was discovered in 1875 by Dr. Bühler in Kashmir. The language was Sanskrit and the script Sharada. Sadly the manuscript is incomplete and mutilated; the lower portions of most of the bark leaves are gone, and of the twelve sargas (cantos) contained in the Prithviraj Vijay not one is complete. The author’s name is also missing but he is believed to be a Kashmiri Pandit who lived at the court of Prithviraj Chauhan, for the following reasons:

Therefore this Jayanak is widely accepted as being the author of the work. The manuscript, in its description of the historical background of the Chauhan clan, clearly states that they were Suryavanshi. In much later times the Agnikula legend was created to glorify several Rajput clans, the Chauhans included, and European writers seized on that late legend to claim that many of these clans were “foreigners” purified by the Agnikula ritual. But the Prithviraj Vijay negates that absurd claim.

The Sambhar Lake, located north-east of Ajmer, as viewed from an isolated hillock. Named after the titular Goddess of the Chauhan Rajputs, Shakambari Devi, it is one of the largest inland saline depressions and makes Rajasthan the third-largest producer of salt in India. At the base of this hillock is the temple of Shakambari Devi. The early history of the Chauhan clan revolves around this lake and town, which was an important commercial center in Ancient India.

The manuscript says that Vakpatiraju I had a large force of cavalry and was called " the enveloper in darkness from the dust raised by the heels of his horsemen."

The sixth sarga of the manuscript contains an account of Arnoraja, the grandfather of Prithviraj. Arnoraja completely vanquished the Mussalmans who had come via the desert, where for want of water they had to drink the blood of horses. Large numbers of them in heavy armor were killed by the heroes of Ajmer. The victory was celebrated with great elation, and in order to purify the place where the Mussalmans had fallen, the king constructed a lake called Ana Sagar after himself. These would probably be the Ghaznavi Turks of Lahore, but the text itself shows that they managed to reach Ajmer before they were vanquished.

Sadly Arnoraja was murdered by his eldest son, who seized the throne, and consequently, the youngest son Somesvara was brought away to his maternal grandfather’s Kingdom of Gujarat. Somesvara fought in the Gujarat army’s campaign in the Konkan and was married to the daughter of the Kalachuri ruler of Tripuri, near Jabalpur in MP. Two sons, Prithviraj and Hariraj, were born to him.

Meanwhile, his second brother Vigrahraja IV overthrew the elder parricide and ruled Ajmer till his death. He expanded the Chauhan kingdom to the foot of the Himalayas and came into conflict with the Mussalmans (Ghaznavi Turks) ruling from Lahore. Vigrahraj’s family was overthrown by the parricide’s son, Prithvibhatta, who defeated the Muslims on the banks of the Sutlej and captured a city named Panchpattan there.

After his death, Somesvara was invited by the Ajmer ministers to ascend the throne. When Prithviraja was still a child his father passed away, and the state was administered by his mother Karpuridevi, the minister Kadambavasa and the general Bhuvanik Malla. The latter defeated the Nagavamshis of Central India.

The tenth sarga says that when Prithviraja attained manhood, several Princesses began to desire to marry him. An early military exploits by the young Prithviraj was the suppression of a rebellion by his cousin Nagarjuna, the son of Vigrahraja. Without taking Kadambvasa or Bhuvanik Malla with him, Prithviraj started with a large army of horsemen, infantry, elephants, and camels to attack Nagarjuna, and captured Gudpura from him. He brought to Ajmer the wife and the mother of Nagarjuna and placed the heads of his enemies on the battlements of the fort of Ajmer.

The manuscript next describes the conflict with the Turk ruler of Ghor. “The land of the North-West where horses abound, the beef-eating mleccha, named Ghori, who had captured Garjani (Ghazni) hearing that Prithviraj had vowed to exterminate the mlecchas, sent an ambassador to Ajmer. This man had a wide forehead, but no hair on his head. The color of his beard, eyebrows, and the eyelashes was of the grapes that come from Ghazni, and his speech was like that of wild birds; it had no cerebrals. His complexion was like that of a leper, and he wore a long choga.” The pages following this eyewitness account are missing but this seems to have occurred in 1178 when Muhammad Ghori invaded Gujarat, sacking Nadol and Kiradu on the way. The manuscript continues, “When these fiends in the shape of men took possession of Nadol, the warriors of Prithviraja took up their bows and the emperor became angry and resolved to lay Ghori’s glory to the dust.” 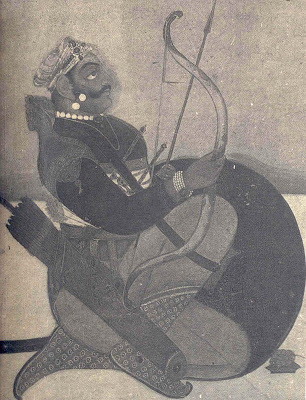 In the eleventh sarga, the minister Kadambvasa says that just as Sundh and Upsundh destroyed each other for the sake of Tilotma, so the enemy will ruin himself by his desire to possess the emperor’s wealth. The minister has not finished when the guard announced the arrival of a messenger from Gujarat with a letter. Hearing this, the Bharatesvara (the emperor of India) ordered him to be called in. The chamberlain presented the messenger, who informed Prithviraja that the king of Gujarat has utterly routed the Ghori forces. On hearing of the rout of the Ghori forces, Prithvibhatta, the chief of the bards submitted to the emperor that he must rejoice that he has got such a minister as Kadambvasa, for Ghori has been destroyed without any imperial effort.

The twelfth sarga provides autobiographical details of Jayanak and the reason why he left his native Kashmir. But here the manuscript tantalizingly and very abruptly ends, as the last page is too damaged to read. The very name of the poem, “Prithviraj Vijaya,” shows that it was composed to celebrate the victories of Prithviraj, the most important of which was the great victory of Tarain near Thaneshwara in 1191 CE. Therefore it is believed that the author was at Ajmer at least till 1191. From the writings of Jonaraja, who lived in the 15th century, it becomes clear that the Prithviraj Vijay was at that time widely known and popular, but was subsequently lost and erased from memory till its rediscovery in Kashmir centuries later. In the popular memory the story of Prithviraj Chauhan was derived from later texts like the Prithviraj Raso.

The painting above is of Prithviraj Chauhan, holding a bow and arrow, strapped with a quiver full of arrows and a dagger, and with a sword and shield by his side. It is from the walls of Bada Mahal in Kota, and is modeled on one of the Hada Rajput rulers of Kota, who are a branch of the Chauhan clan.

Wealth & Splendour of Chauhan Kingdom, Ajmer, Prithviraj Vijay
Battle of Tarain - Estimate of Forces on Both Sides in the Two Battles