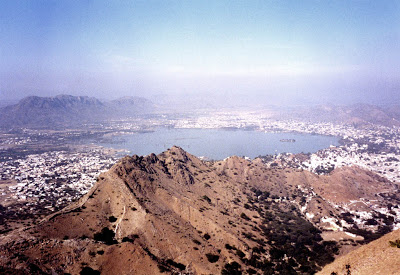 The wealth and splendour of the 12th century Kingdom of Ajmer as described in the contemporary text, Prithviraj Vijay. In the photo above (from Flickr) The city of Ajmer and the Ana Sagar Lake in its midst are seen from the summit of Taragarh.

In the opening sarga of Prithviraj Vijay the author, Jayanak from Kashmir describes his residence in the religious center of Pushkar. He states that a temple of Bhagwan Shiva, named Ajagandha Mahadeva, existed in Pushkar at that time. The poet makes Brahma say to Visnu that originally there were three yajnakunds (sacrificial pits), but in course of time, they became lakes. The sarga ends with an account of the great sanctity of Pushkar.

Jayanak is full of praise for the city of Ajmer, founded by Ajayaraja Chauhan, and known originally as Ajaymeru: "Ajayameru is full of temples of gods and fully deserves the title of Meru (the abode of gods). The sacrificial fire is the cause of rain. From its lofty houses one could pick up the stars like flowers, can bow to the celestial river (the Milky Way) and can listen to the seven sages (in the Great Bear) reciting the Vedas in the evening. Kaliyuga, though it goes everywhere, cannot see it, although a thing situated on an elevation is visible to all. The god Siva is present in the hearts of men, and Cupid blazes in the hearts of ladies, the amorous glances from whose eyes fan him. The rulers rule over the country as far as the sea and their fame is not confined to the earth.

Baories (stepped wells), wells, lakes, and water depots are full of water. People sitting in jharokhas enjoy the cool breezes of the Ganges of Paradise. The god Varuna, afraid of the oceanly fire, has taken shelter here, which is the cause of water being so plentiful, even in the wells on the hill-fort of Ajmer. The perfumed incense burnt by ladies to dry their hair, gathers in thick clouds and hides the moon. The increasing prosperity of the city has laid low the pride of the city of Indra.

People get water from Pushkar and revere it. Lovers exchange excellent repartees. Servants laugh at nurses when the latter cry out at children laying their hands on lamps of jewels (which give forth light but don’t burn). The big blocks of white stone used in building houses in this city make the black spots in the moon appear white by reflected light. The camphor and musk which drop from the bodies of the citizens in the streets make the cloths of the passers-by white-black. The city Rama conquered after crossing the sea (the Golden Lanka) and that founded by Krishna in the sea (Dwarka) are not fit to be handmaids of Ajmer. This city is, as it were, the husband of Indra’s city, Amravati."

The eighth sarga describes the festivities and rejoicings on the auspicious occasion of the birth of Prithviraja. A wet nurse was appointed for him and a tiger’s claw and illustrations of the ten incarnations of Bhagwan Vishnu were placed in his necklace. A copper coin of Prithviraj Chauhan depicting a horseman bearing a lance with streamers. The coin bears the legend “Sri Prithvi Raja Deva” in Devanagari script.
Prithviraj’s uncle, Vigraharaja, had constructed in Ajmer the same number of temples as the hill forts he had conquered; in their midst, Prithviraj’s father, Somesvara, built a temple of Vaidyarath, which towered above them all. In it he placed “an effigy of his father on horseback, with his own effigy in front, facing his father’s. He placed the images of Brahma, Visnu, and Siva in one place in a temple. He built five temples, and so Ajmer vied with Meru, which boasted of its five Kalpavriksha. He built so many temples in Gaugnak (9 miles northeast of Ajmer) and other places that the population of the City of Gods (Meru) dwindled away.”

The ninth sarga says that during the regency of Prithviraj’s mother Karpurdevi, the city of Ajmer was so densely populated and there were so many gardens, tanks, and wells, that not more than one-tenth of the earth was visible to the sun. Water in the wells was found only three feet below the surface! Unfortunately, the manuscript is damaged and the last few pages, which would have perhaps shone light on the first Battle of Tarain and busted many myths that have sprung up later, are either missing or too mutilated to read.