Rajput : Defining the Identity, Understanding its Genesis and its Relevance in 21st century 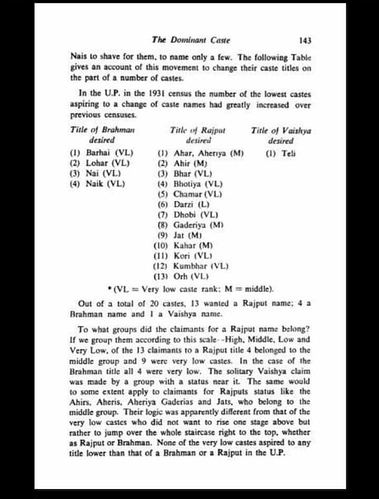 Problem: So the desire to become a Rajput is far greater than the desire to become a brahmin or Vaishya . However, Rajputs have lower literacy rate & wealth than both Brahmins and Vaishyas & ranked 2nd in caste system. Explanation? To appropriate our collective past as well along with surname.
As there has been a continuous appropriation of ‘Rajput identity’ by middle castes like Gujjars, Jats etc since Arya Samaj days, it is essential to study what the identity means, sociologically and anthropologically; and check those casual descriptions thrown at it.

Hence, the need to define our identity anthropologically to offset confusions brought about by Sanskritization and its exploitation by some political orgzanizations.

Q1) What is the Rajput community?

Ans A cluster of many intertwined & interrelated coparcenary kinship based segmentary lineage groups historically monopolizing kshatriya varn in their native region- from Punjab to Bihar, Pir Panjal to Gondwana.

Rajput - member of this ethnic group.

Ans. Certainly Not. There are 40-50 million Rajputs, of which only a few thousands are ex-royals. Rest were jagirdars and cultivators who militarily served the clan-chief or State’s king. hence a question arises why the term “Rajput” ? That’s because every Rajput , from royalty down to the laity are kinsmen tracing their genealogical identity to a single legendary Raja.

Ans. Yes it was at some point and No, it isnt anymore. In it’s inception an ethnic group takes geography, language, interests etc as the reason for social bondage evolving into socially cohesive group wherein the bonds of people take precedence over that initial idea. eg later both Pathan & Mongol identities became independent of Pashto and mongolian steppes, though that was the initial idea. The word Mongol itself has its origins in Korean word for 8th century Mengwu tribe of the region. Today both are lineage groups.

Analysing Arab chronicles, Andre Wink puts Jat as a term for 9th century Sindh’s camel herders,who later took up agriculture when pushed into Punjab and Rajasthan.Same with Gujar as a coalesce of buffalo rearers migrating from ancient Gurjara or Marathas as soldiers of Deccan.

But today each of the above-mentioned identities are independent of their “social class” origins.

Similarly, the Rajput identity has its moorings in coalescence of all the kshatriya clans and armed peasantry of North India, and hence even remained a loose term for indigenous North Indian cavaliers, infantrymen in early mediaeval India. but today like Marathas, Rajput remains just an ethnonym for all the clan kinship groups, spread across different socio-economic classes, taking different occupations.

Hence it is NOT a social status.

This exactly defines the distinction btw ethnic Rajput & ‘spurious’ rajputs. A clear way to spot “spurious” rajputs is that they add the phrases Rajput or Kshatriya as suffix to their caste/biradari to enhance “social status”.

For ethnic rajputs, however the term only defines his association with the larger clan-conglomerate.

Q4) Throw light on the etymology of the phrase Rajput, its history and applications ?

In this image “Rajaputra Kirtipala (1160 AD)” is the Chauhan ruler of Nadol, a branch of the mainline at Ajmer. See Chauhan Rajaputras

Notice that despite taking up a boastful title of Maharaja, the King is still sticking to the traditional clan head title i.e. rAjnah. Because his was a kshatriya clan-based Kingdom held together by his clansmen. This was the norm and not an exception. It continued even in medieval times as we shall see. Asvaghosha’s (80-150 A.D.) Saundarananda refers to rAjaputras.Various buddhist texts call Budhha a rAjaputra.Early 6th century around 510 A.D. the Kura stone inscription of Toramana mentions rAjaputras.
Emperor Harshavardhan gets crowned in 606 A.D. at Kannauj and yet continues for many years with the epithet rAjaputra shilAditya . Arabs of 9th century A.D. acknowledge rAshtrakutas aka Vallabh-Raj or Ballah-Raya or Al-Ballahara as the greatest King in India and one of the 4 most prominent Kings in the world. Medieval Rathores are descendants of these Rashtrakutas. Copper grant of prince GovindaChandra of Rashtrakuta branch named Gadhavala/Gahadvala, dated 1104 A.D. calls him mahArAjaputra. 1143 AD inscription of his son shows the same title and is in the name of mahArAjaputra rAjyapAladeva.1134 AD Inscription of Singar/Sengar family who were feudatory of Gadhavalas, is in the name of mahArAjaputra vastarAjadeva. Nadol copper plates of 1161 A.D from South Rajasthan proclaim the local Chauhan lineage’s progenitor Kirtipal Chauhan as rAjaputra. Delhi Shiwalik inscription of Vigraharaja Chauhan 1163-4 A.D. mentions – rAjaputra SallaksanapAla was serving as mahAmantri. Lalrai inscription 1176 AD from south Rajasthan speaks of Chauhan princes Lakhanapal and Abhaypala as rAjaputras and rulers of the region. Jalor Stone Inscription of SamaraSimhaDeva 1182 AD refers to Rajaputra Jojila Chauhan. If present date Brahmins are descendants of Vasishtha, Bharadvaja, Mudgala, Kaushika. Then how come Rajputs are not descendants of Vedic Kshatriyas. Did the latter disappear in thin air? Source: here

Q5) What is the Origin of Rajput clans?

Q6) What is the Origin of Rajput ethnonym ?

Ans Evident in the definition given in answer to Q1. Also explored in Q3. The ethnonym evolves by 10th century for all hitherto existing Kshatriya clans of North India. Though kshatiyas of North India continued to use terms like Rajput in Rajasthan, Darbar in Gujarat, Thakur in UP & Bihar.

The time in history when Pratihars emerged to prominence is the same when the term Rajput i.e. rAjaputra started to get applied in community connotation. It is after the Arab invasions which catalysed another phase of new kshatriya clans replacing the old ones into prominence. A question arises. Why are early Islamic invaders noting their opponents as Rana’s, Rais and not Rajputs. Answer is that it takes time for a term to gain social currency for people to apply to a whole community and doesn’t happen overnight. First the spoken languages like Prakrit and Apabhramsa adopt the change and then the classical ones like Sanskrit. But what were the catalysts of this process and why only these people of North and West India?

Northwest India was at the forefront of constant invasions from Millenias , not just in Islamic era. With Imperial centers coming and lapsing. The numerous kashatriya clans that straddle these lands at least since Panini’s time , were obviously more keen on self-reliance, sovereignty and standalone setup for their own preservation. Because they fought on all sides all the time .
The identity of medieval rAjputs as a community was however iron cast in the furnace of one such grand invasion by Arabs in the 8 th century (also the core of my contention with the oxymoron called muslim Rajput). Chewing the elsewhere victorious Arabs then, was a big achievement for the currently presiding kshatriya clans in north India. They were led by nAgabhatta PratihAra, with Chauhans, Guhilots and Chalukyas in supporting role. While the bigger Kingdoms splintered around that whirlwind. The clans led by kshatriya feudal chieftains succeeded those larger empires/kingdoms of past in their own limited capacities. From the rubble of Arab storm, we see fully hereditarily operated smaller Kingdoms, now thriving & rising further. Their titles became beacons of their leadership, resistance and prestige.

Powers like Pratihars, Chauhans, Paramars, Chalukyas, Guhilots etc which rose after this epoch were fully clan based Kingdoms in military as well as administration. With the completion of heredity trumping ancient republic structures in politico- military operations of people. This is how the term rAjaputra gradually gained credence for application to wider groups (kshatriyas clans that got popular Arabs onwards) later known as Rajputs.

Q7) How do we understand the Kshatriya sociopolitical setup of early medieval India as different from that in Ancient India?

Ans. In Ancient India, we had kshatriya monarchies only at higher levels and tribal republics at lower levels sprinkled with warrior clans.
In early medieval India starting from the Gupta era, however things change, the kshatriyas now occupied the position of both the monarchy and the larger tribal clan/subclan republic, entities also called the kul and the khamp. Hence the Rajput or kshatriya sociopolitical setup, often vascillated between Feudal Monarchical setup and the Republican kul/khaap setup, with the latter always being extant while the former getting established only upon Political hegemony.

For example: the Bittho inscription of Rao Sihaji circa early 13th century and Palival Chhand talks of his death while leading 5000 Rathores to defend Pali from the erstwhile Delhi Sultan. Rao Sihaji was more of a tribal chieftain of this section of Rathores who lived then in Pali. Does it mean that he was an upstart? Definitely not. He came from a family of Kannojiya Rashtrakuts who were samants of Gahadavala Emperors of Benaras who perhaps manned a multi-clan army at Kannauj. And similarly, post Sihaji, the different Rathore chiefs continued to struggle to establish themselves in Pali, Idar, Mandore and Mahewa/Barmer. And it was only by 1453, that a semi-feudal Rathore Monarchy was established in Marwar by Rao Jodha. Hence we see a continuous shift in the line of Rao Sihaji, from being samants to Chiefs to Monarchs. Similarly, dissolution of Imperial Chauhans and Imperial Pratihars, was followed by the various republican subclans/ khaaps fighting for lebensraum or living space in forms of settlement, agricultural lands and livestock, until some like Deora Chauhans of Sirohi, Hada Chauhans of Ranthambore, Khichi Chauhans of Gagron and Khilchipur established small monarchical setups. Similarly, dissolution of Imperial Pratihars forced their various Parihar sections - Kalhans, Madhads etc to venture and struggle to establish independent monarchical setups, after struggle against rival kshatriyas, Muslims and tribals.

Q8) Apart from the definition, what characterizes the Rajput ethnic Identity?

Ans. The Rajput biradri (like others) derives its relevance not just as a kinship lineage group not just through it past history, folk gods , folkheroes, idioms but it’s own socioeconomic political struggles.
Since it also defines both an individual and the clan’s situation with respect the Gov’s welfare policies.

Q9) Isn’t this appropriation (by Ahirs, Jats, Gujjars etc) a form of socio-mobility ?

Ans. No, it isn’t. It is revisionism & fabrication. Inventing a kshatriya past by laying claims over Rajput clans, maybe a chase for status for them but for the Rajputs it is about encroaching their ethnic identity. the Gujjar community must stick to agitating for ST reservations, instead of inventing a kshatriya past by encroaching upon Rajput identity because in any case the Varns of the past doesn’t help socioeconomic present.

People must rise above false notions of "social status"

Q10) Elaborate on why Varns of the past don’t help?

Ans.“Chaturvarn” is dead,with urbanization & globalisation. Varns - Brahmin, Shudra etc are irrelevant. Coveting another “Varn” now is like “visiting theater after the play ended” & is only worth mocking.
eg, Jat identity has come a along way from being 9th century Sindh’s camel-rearers or Gujjars from ancient Gurjara’s buffalo-rearers.
Many are successful politicians and businnessmen.

But “Jat kshatriya” or “Gujjar kshatriya” are but “modern”, unnecessary and irrelevant terms.

Ans. No. Biradri is people & an Ethnic grouping.
The relevance of Biradris is marked by uniquely shared history, norms, folklores, cultures and kinships. Above all shared socioeconomic & political struggles in a country where the State welfare policies are & will be based on presence/absence of an individual’s biradari affiliation.

Eg Socioeconomically both the Jaat & Rajput are similar with presence of rich businessmen & poor cultivators. Yet the Gov OBC policies differ hence socio-economically similar, they have not just have different clans, cultures but also different political struggles today since affiliation to a biradri or not, decides your share in Gov’s welfare policies.

Q12) Is welfare of each community, only the responsibility of the Gov in this multi-ethnic multi-cultural nation?

Ans. No,which is why apart from different OBC, SC/ST Unions in different Gov dept & PSUs, there are Community initiatives - the Sikhs and the Marathas are good examples, wherein it is goodwill of the Upper-class, intellectual labour of the bourgeois , organisational leadership of the working class work together to improve the collective lot.

This is where our focus must be as people, afterall across classes we are all kins. Hence the relevance.

Honest opinion regarding Pallival Chhand? Several historians like AC Banerjee and DR Bhandarkar take it seriously. It gets the dates right an everything.