"RAjaputra" - Etymology of the term, its History and its Kshatriya usage

Origin of the term - its RigVedic Roots

In the earliest Indian text (the Rig Veda dating back several millennia) the word jan refers to a tribe/people while the ruler or protector of that tribe is called the Ra-jan . The Rajan’s wife is called the Rajani and his brothers, cousins, and nephews are called Rajanyas (also pronounced Rajanka ). These Rajanyas provided the armed strength to protect the jan while the Rajan was their leader in war and an administrator/judge in times of peace.

In later times Rajan evolved into Raja (King), Rajani into Rani (Queen), and Rajanya into Rana (chieftain). Such changes were of course more immediate in the spoken languages like Prakrit or Apabhramsa and slower in the classical language of Sanskrit. As populations grew and tribal territories expanded into monarchies, the Rajanyas must have become landowners/rulers in their own right with the word Rana becoming a hereditary title. And when these Rajanyas became chieftains another word was needed for the mass of ordinary soldiers and nobles who were not chiefs—this new word was Kshatriya or warrior [3]. It is in this later Vedic age that we read for the first time of the word Rajaputra (the Raja’s son).

This is the right place to mention the historical personalities associated with the word Rajaputra . The famous founder of Buddhism, Siddharth, was a prince who left his family to contemplate the meaning of life. Since he never returned to become king after his father’s death, he was always called Rajaputra Siddharth in all Buddhist texts.

The break-up of the Maurya Empire in northwest India and the intrusion of foreign powers like the Yavanas and Sakas encourged decentralization of North Indian polity. 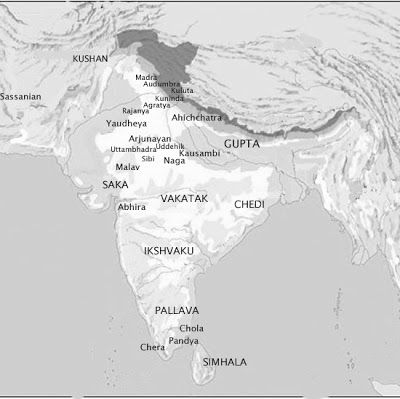 So while the big powers began using high-sounding titles, this also had its impact on the clan-states that were subject them (or resisted them). The map displays the location of these republican clans (all in small fonts) against the major powers (in big fonts)…as can be seen clearly the republican clans are mostly located in the regions of the western, central and northern parts of India.

This is the period, when Rajputra as a designation shifts from being a royal designation for prince (Instead Rajkunwar or Kunwar became a more frequent usage for the same) to all clan members, the Chief and the entire clan-brethren, signifying a kinship lineage identity and ancestory from some legendary chief in antiquity, like Chauhans traced identity to Chahmana, Jaduvans from Jadu, Guhilot from Guhaji and Pratihars from Laxman.

Early Medieval shift: Royal title to ethnonym of all Kshatriya clansmen of North 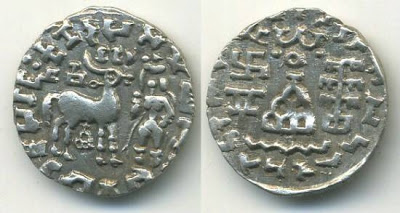 But in the Himalayan territories, where these republics survived for a longer period than in the plains, Rana has been preserved as a surname for a section of the Rajput population from Himachal to Nepal.

Firstly, all the above mentioned was not an exhaustive list but just some examples. Secondly, it becomes an even larger list if we were to include occurrences of other closely associated terms in vogue that came out similarly – Rawal from rAjakula, Rajanya, rAjini (women), mahArAjini, also rAjanaka, rAjanka ranaka, rAnA, Rao, Rawat (from rAjaputra) etc.

These cases above clearly indicate a gradual proliferation of the term rAjaputra, into a state of application regardless of whether one was currently a prince, chieftain, son of chieftain or neither – even if just an of official or functionary . This is obvious if a whole community spawns out of rulers and officers of a hierarchy.

The last phase, when the term Rajputra comes to be applied to all kshatriya clansmen, from the raja to the commoner , that it’s usage shifts from a royal designation to an ethnonym highlighting corpacenary clan-kinship & a Segmentary lineage group.

{This post makes use of two other blogs : by agrippedsoul and airavat singh hence quote those verbatim }

2 Likes
Rajput : Defining the Identity, Understanding its Genesis and its Relevance in 21st century