The Battle of Khajwa, Aurangzeb vs Shuja

Another event associated with the history of the eastern regions is the battle between the usurping Mughal Emperor Aurangzeb and his elder brother Shuja, who was viceroy of Bengal. It showcased the tactical use of elephants in the war in such a late period—the battle was fought on January 5, 1659.

Aurangzeb had defeated his eldest brother Dara, and his allies, at the Battle of Dharmat and the Battle of Samugarh. He had forced his father Shah Jahan to surrender the capital city of Agra to him and had then put him in confinement—at Delhi Aurangzeb even sat on the throne as Emperor though his father was then still alive. His younger brother and former ally Murad was tricked into imprisonment and executed a few years later. With such a record of filial affection the letter Aurangzeb wrote to Shuja was dripping with hypocrisy, “ Like a true brother I shall not refuse you anything you desire, be it land or money. ”

Shuja took his brother’s words at their true worth and began preparations to fight him. Although earlier even he had crowned himself as an independent king and had also tried to seize Delhi from Dara[1], now he told his officers, “ I shall…secure the person of Shah Jahan and restore the old government. And then I shall stay at court as my father’s obedient servant .” He was hopeful of securing the services of the men still loyal to his father on the way to Agra—at Rohtas, Chunar, and Allahabad many soldiers of Dara joined his army. At Varanasi Shuja extorted 300,000 Rupees from the merchants of that rich city—he now had a respectable force of 25,000 cavalry, 114 cannons of all sizes with the infantry to protect them, and the famous naval flotilla of Bengal that sailed up the river to Benares.

Aurangzeb had heard of Shuja’s movement from his spies and he rushed down from Punjab joined by subordinate Rajas and imperial officers along the way—Mir Jumla force-marched his army all the way from the Deccan to come to his master’s aid. The usurping Emperor had a huge army of 90,000 cavalry, the bulk of the imperial artillery, and a sum of 10 million Rupees drawn from the Agra treasury. The two armies faced off on level ground near the village of Khajwa in the Fatehpur district[2].

The night before the battle all was quiet in the two camps—but strangely the right-wing of Aurangzeb’s army was fully armed and mounted. The commander of this wing was Maharaja Jaswant Singh Rathor of Jodhpur who had earlier fought against Aurangzeb in the Battle of Dharmat, but had then joined his side after Dara abandoned his father and escaped to Punjab. Aurangzeb too was keen to have this large Hindu Kingdom on his side while his position on the throne was still unstable. But Jaswant was not happy with Aurangzeb’s usurpation of the throne nor did he see a happy future for his Rajputs in the bigoted prince’s service.

At Dharmat Jaswant had told his soldiers that he did not engage in treachery or fight with subterfuge—after suffering a bloody defeat in that battle he seemed to have changed his mind. The Rajput king sent a message to Shuja that he would attack Aurangzeb’s camp in the rear and lure him away from the front, leaving behind a disorganized army that Shuja could easily defeat. Just after midnight, when Aurangzeb was engaged in prayers, over 10,000 Rajput cavalry turned around from its position and charged the Mughal camp in the rear. They slaughtered the guards and pulled down the tents, carrying away horses, camels, baggage, and large amounts of money. The tumult in the camp spread to the army, groups of soldiers joined in the plunder or deserted to Shuja, and the entire frontline was in a shambles.

As the plunder-laden Jaswant Singh took the road to Agra, Shuja did not stir from his own camp—no one from his side even ventured to take advantage of the chaos in Aurangzeb’s army. The Mughal prince had received Jaswant’s message and heard the rumble of his charging cavalry at the promised hour, but Aurangzeb’s reputation for deceit and treachery led him to believe that it was his own brother’s scheme to draw Shuja out within the range of his artillery! So Shuja did not budge from the safety of his tent——Aurangzeb took advantage of his brother’s indecision to restore confidence in his men, saying to them, “ If the infidel (Jaswant) had played traitor in the midst of battle, all would have been lost. His flight is good for us .”

But when day broke the conditions were not so positive—Jaswant had effectively wiped out half the Mughal army as only 50,000 cavalry could be assembled around Aurangzeb. It was still a two to one superiority but now at least the 25,000 of Shuja had some chance of winning the battle. To neutralize the superior numbers of the enemy Shuja did not match his brother division for division, each spread out some distance from the other but drew his entire army into a single line. His aim was to stake it all on one general attack across the entire front. 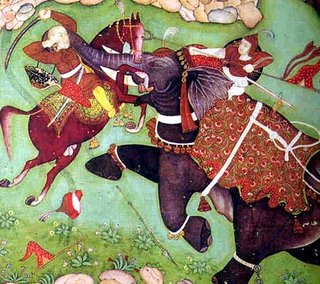 As pointed out earlier the use of elephants in the war had begun thousands of years ago in these very eastern regions. But over the centuries, and particularly with the Turk invasions, their role in battle had undergone several changes. The Turks relied primarily on cavalry and archery to defeat their opponents—hence they used elephants in smaller numbers than the older Hindu Kingdoms. These mountainous beasts were placed in the front and sent to initiate the attack—the gaps created by their charge would enable the main Turk cavalry to ride through and cut up the rest of the enemy force. Alternatively, they would be used to deter an enemy advance while the cavalry engaged in maneuvers hidden behind them.

Under the Mughals, though this role was taken up by the artillery—elephants were now used as mounts by royalty and by army commanders, to get a bird’s eye view of the battle-field, and to be visible to their soldiers at all times. There were very few war-elephants and in fact, the total number of elephants used even as mounts had been less than a dozen in all the campaigns of the Mughals.

At Khajwa Shuja sprung a nasty surprise on Aurangzeb by revealing three elephants trained for war, each driven by an experienced mahout and each carrying a huge iron chain in its trunk[3]. These three were placed on the right of his army and behind the artillery, which was dueling with the opposing artillery at long range. When finally the two armies drew closer Shuja ordered a charge along his entire front—the left portion of his army under his son Buland Akhtar shook the opposing right-wing of Aurangzeb. A Mughal officer named Islam Khan had taken Jaswant’s place in that wing—while he was rallying his men to stand fast against the enemy, his own elephant was hit by a rocket. Since this was not a war-elephant, it took fright and fled away. 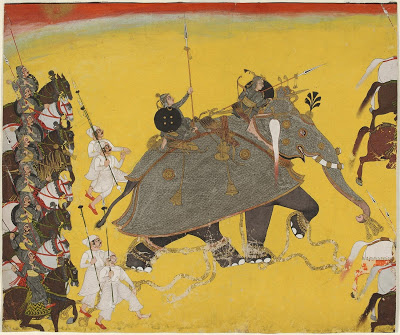 But the greatest damage to Aurangzeb was done by Shuja’s war-elephants. Followed closely by the cavalry the three elephants threw aside the enemy soldiers and horses as they swung the heavy iron chains in their trunks. The entire left wing of the usurping Emperor broke down and fled before their charge—their shots, arrows, and lances had only succeeded in further goading the infuriated war-elephants[4]. Two of the elephants swerved away to the right but one attacked Aurangzeb in the center—one of his matchlock men shot down the enemy mahout. His officers on their own elephants surrounded the rampaging beast while one of their mahouts jumped on its back and finally brought it under control.

By this time Aurangzeb’s reserves had come up to his rescue and succeeded in repelling the enemy cavalry that followed in the wake of the charging elephants. He now advanced to shore up his damaged right-wing and here again, the greater numbers finally broke the enemy’s steady advance and pushed them back. All this while his artillery under European gunners had kept its place in the field through all the charges and counter-charges—they concentrated their fire on Shuja’s men in the center. On his officers pleading Shuja stepped down from his elephant to escape being hit by the accurate firing of the Europeans—but this very move alarmed the remainder of the army, which saw the empty howdah and took him to be dead, and promptly ran away from the lost field.

With the rest of his army, Shuja fled behind them until he reached the safety of his flotilla in Benares. Even though he managed to escape, there was no rest for the Mughal prince since his dear brother deputed Mir Jumla to hunt him down through the waterways of Bengal——a chase that ended finally with his death in faraway Arakan.

Credits: Original Post by Airavat Singh on his blog, “Military History of India” / "Horses and Swords"