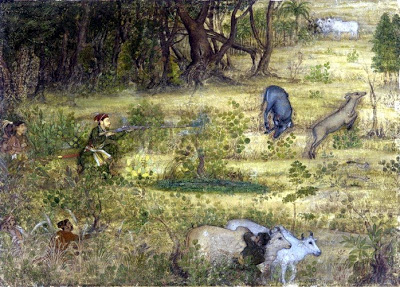 Fought more than a month after the Battle of Dharmat on the 29th of May 1658. The rebel princes Aurangzeb and Murad out-maneuvered the Mughal heir-apparent Dara Shikoh to reach the village of Samugarh on the outskirts of Agra.

Shah Jahan and Dara had received news of Jai Singh’s victory over Shuja near the city of Benares in February. Dara’s son Sulaiman was leading that army further east to hunt down his rebellious uncle but there was bad news from the south. Jaswant Singh had been defeated at Dharmat and his army had dissolved—this news reached Dara ten days after the battle had been fought.

Collecting a fresh army, the Mughal heir marched south to block the road to Agra. At Dholpur he built mud embankments, planting there his heavy artillery and posting his musketeers in the trenches. The road from Ujjain, after passing through Gwalior, crossed the Chambal at Dholpur but Dara Shikoh took the added precaution of sending patrols along the river to watch any other place of crossing.

In the meantime Aurangzeb and Murad were at Gwalior—the latter prince was now completely under the spell of his older brother. The losses they had suffered at the hands of the Rajputs in Dharmat were repaired by the adhesion of more imperial contingents joining them at every town and fort. Moreover, the local powers of Malwa province also came to salute the rising sun and sought some gain by joining the winning side.

Among these were Champat Rao Bundela and the Jat zamindar of Gohad (a village near Gwalior). One of them told Aurgangzeb of a little-used ford further east that was unknown to most travelers. Since the way passed through thick jungles and rocky pathways Aurangzeb’s army suffered losses but successfully crossed the Chambal on the 23rd of May. Now the rebel army was marching north to Agra, in the rear of Dara Shikoh’s force. ( Gohad later became one of the three leading Jat states along with Bharatpur and Dholpur. On the other hand, Champat Rao Bundela was killed by order of Aurangzeb only three years later and his famous son Chhatrasal led a campaign to free Bundelkhand from Aurangzeb’s oppression.)

Dara had to abandon all his elaborate defense works and rush back to bar the enemy’s path to Agra. In the process, he lost some of his heavy artillery. Dara entrenched at Samugarh and waited for the enemy.

Aurangzeb reached the place after a non-stop march; Dara immediately marched out to give battle ( a good move ). But some distance from his camp he halted and decided to wait and watch ( a bad move…the general who hesitates is lost ). Aurangzeb profited from this by resting his men and horses throughout the heat of the day while Dara foolishly kept his soldiers armed and his artillery deployed without advancing an inch, and then retired from the field at sunset! His younger sibling had gained a moral victory without firing a shot. It became clear to all that Dara feared Aurangzeb’s military capacity.

The next morning (29th May) the two armies deployed for the battle in the usual formations and began the contest with the futile discharge of artillery at long range. Dara had no real experience of pitched battles and had drawn up his artillery in a single line, while Aurangzeb followed the normal practice of assigning guns to each division separately. In his ignorance, Dara overestimated the effect of his cannonade and ordered his band (pipes, kettledrums, and brass drums) to play—the usual method of ordering a general advance on the enemy.

From Aurangzeb’s side Prince Murad, commanding the left wing, rashly advanced towards the opposing right wing of Dara’s army. This wing was under an imperial officer named Khalilullah Khan and his Uzbek clansmen who only made a show of fighting—Aurangzeb had already corrupted them to support his cause. The rest of Aurangzeb’s army rigidly kept its place and the various divisions directed their artillery fire at the advancing enemy.

However, a far greater crisis had developed for Aurangzeb on his left. Murad’s reckless advance blocked the line of sight of the artillery in the vanguard and gave a golden opportunity to Dara’s vanguard—commanded by Rao Chhatrasal Hada of the Rajput Kingdom of Bundi. Apart from the Hadas, there were Gaurs, Rathors, and Sesodias in the thousands, wielding swords and lances and mounted on spirited horses.

These Rajputs saw their chance and charged forward, throwing themselves on Murad’s contingent—the enemy artillery could not harm them without also killing Murad’s men. The Mughal prince was severely wounded and lost his chief officers; his army crumpled when some Afghan retainers of Dara came up in support of the Rajput charge.

The victorious Rajputs turned their horses against Aurangzeb himself in the center. By this time their momentum had been spent and a severe hand-to-hand fight raged. Rao Chhatrasal’s wounded elephant turned away but the battle-hardened Rajput jumped down and mounted a horse. One by one the Rajputs fell but no support came from their commander.

The inexperienced Dara had made his last and most fatal mistake. Excited by the charge of Rustam Khan and his Sayyids, Dara had advanced his center in support. This movement blocked his own artillery from harming the enemy—worse the gunners, foot-soldiers and camp followers promptly turned aside to loot the camp, which was their practice when no one was sternly watching over them.

While Dara’s guns fell silent the enemy artillery continued firing. As Rustam Khan’s force crumbled Dara lost his chance to take the attack to Aurangzeb in the center. Just then he learned that the Rajputs of his vanguard had defeated Murad and were then breaking through to attack Aurangzeb from the other side. The excited Dara once again goaded his elephant to swerve right and his men rode a long way across their entire front to support the Rajputs but it was too late. The vanguard had elicited a whiff of victory and ended its struggle with an act of desperate valour— Raja Rup Singh Rathor jumped off his horse and with his double-handed sword cut a way to Aurangzeb’s elephant.

With the same heavy sword, the Rajput chief slashed the legs of the elephant and cut the ropes holding Aurangzeb’s howdah. Aurangzeb cried out to his men to spare the life of such a hero but they had already surrounded and cut down the last hope of Dara’s side. The enemy’s right wing was behind them and the vanguard was advancing forward, while artillery fire carried off many men and beasts. Dara left his elephant for a horse to avoid being hit by a gun—seeing this the Uzbek right wing, which had stayed aloof from the battle took the pretext to flee and following their example the rest of the army broke up.

Dara’s center, which had first moved forward, then swerved right a long way and now was facing artillery fire, played no part in the battle except to exhaust itself in the heat. Aurangzeb’s band began playing the tune of victory—Dara’s men in the center either fled or surrendered to the enemy. The luckless prince, inexperienced in campaigning and ignorant of warfare to the very end, fled to his mansion in Agra but at least kept some honor by sending the following message to his dear father Shah Jahan:

“I don’t have the face to appear before your Majesty in my present plight…give up your wish to see my ashamed face…I only beg your Majesty to pronounce the fatiha on this confused and half-dead man in the long journey that he has before him.”

The fatiha is read for those who have passed away.

Dara’s ignorance of warfare was the result of the doting love showered on him by his father, Shah Jahan. Usually, the best and quietest provinces were assigned to Dara and he stayed constantly at his father’s side even after he had become a mature adult. Dara even lacked the basic fighting experience that could be gained by subduing the usual rebellions of the peasantry because his estates were orderly and well administered.

Dara’s lack of real military experience was compensated by his strategic vision, his secular ethos, and his polite behavior with the nobles. He had built around his person a group of loyal and dependable subordinates of different races and creeds. Unfortunately, he divided and weakened this force by sending separate armies against each of his brothers. And even his closest followers abandoned him when he refused to face Aurangzeb later in Punjab.

Aurangzeb, on the other hand, tackled one brother at a time. He first flattered Murad and brought his drunkard brother’s force under his own control; next, he fought and defeated Dara and gave him no rest by chasing him from one end of the empire to the other; once Dara was on the run Aurangzeb concentrated his forces against Shuja and defeated him.

All through the war of succession, Murad acted as a mere divisional commander to Aurangzeb. At Samugarh his army had suffered heavy losses at the hands of the Rajputs and Aurangzeb easily overpowered him after they had gained Agra. 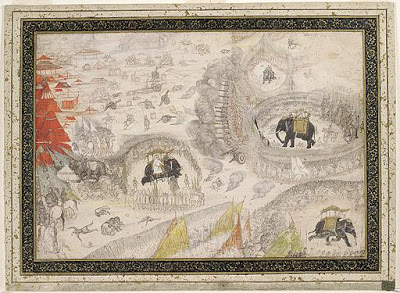 This miniature painting depicts the closing stages of the Battle of Samugarh. On the left are the red tents of Dara Shikoh’s camp, on the right is the approaching army of Aurangzeb and Murad, while in the center Dara dismounts from his elephant, which is then shown fleeing away in the bottom of the painting.

2 Likes
The Battle of Khajwa